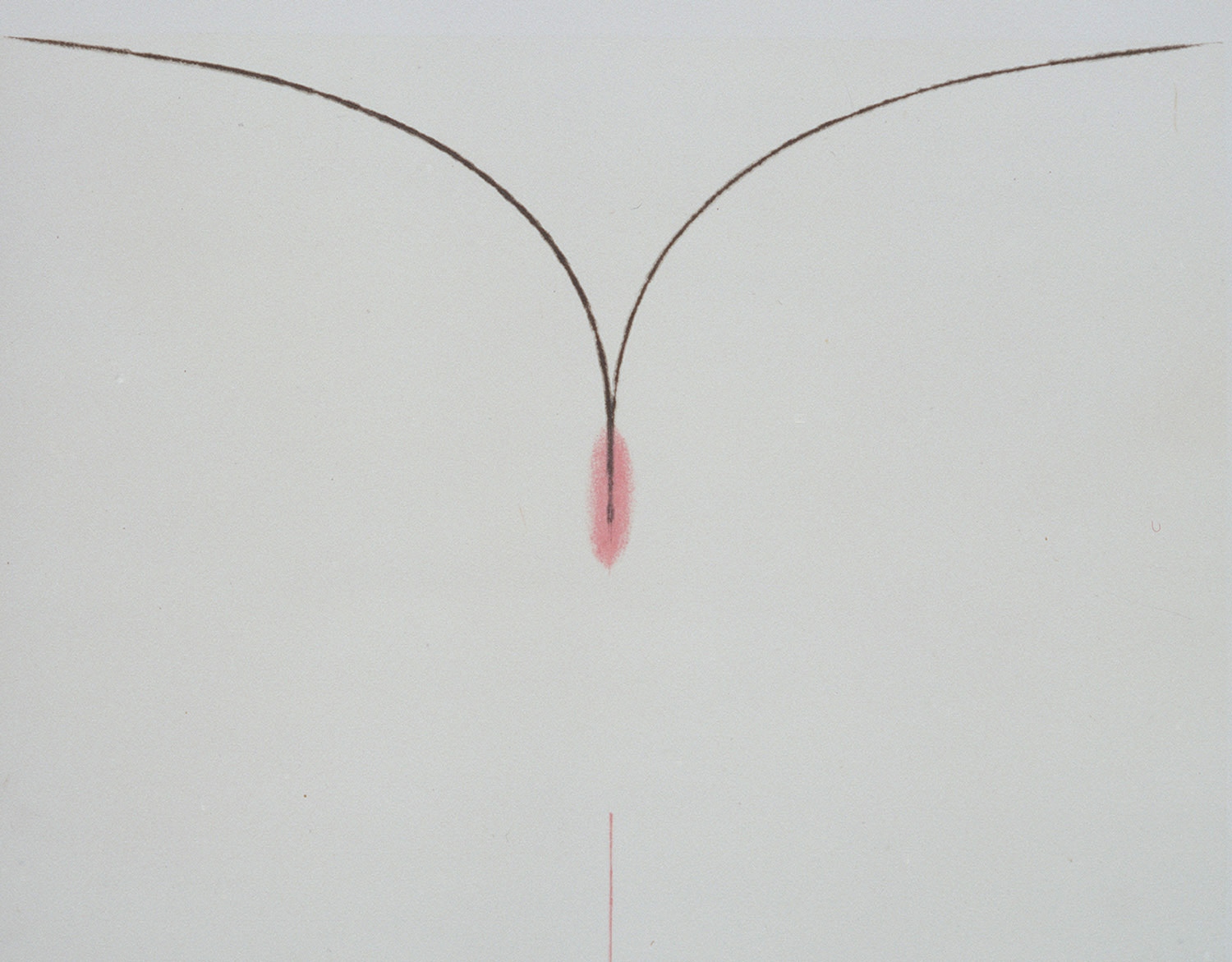 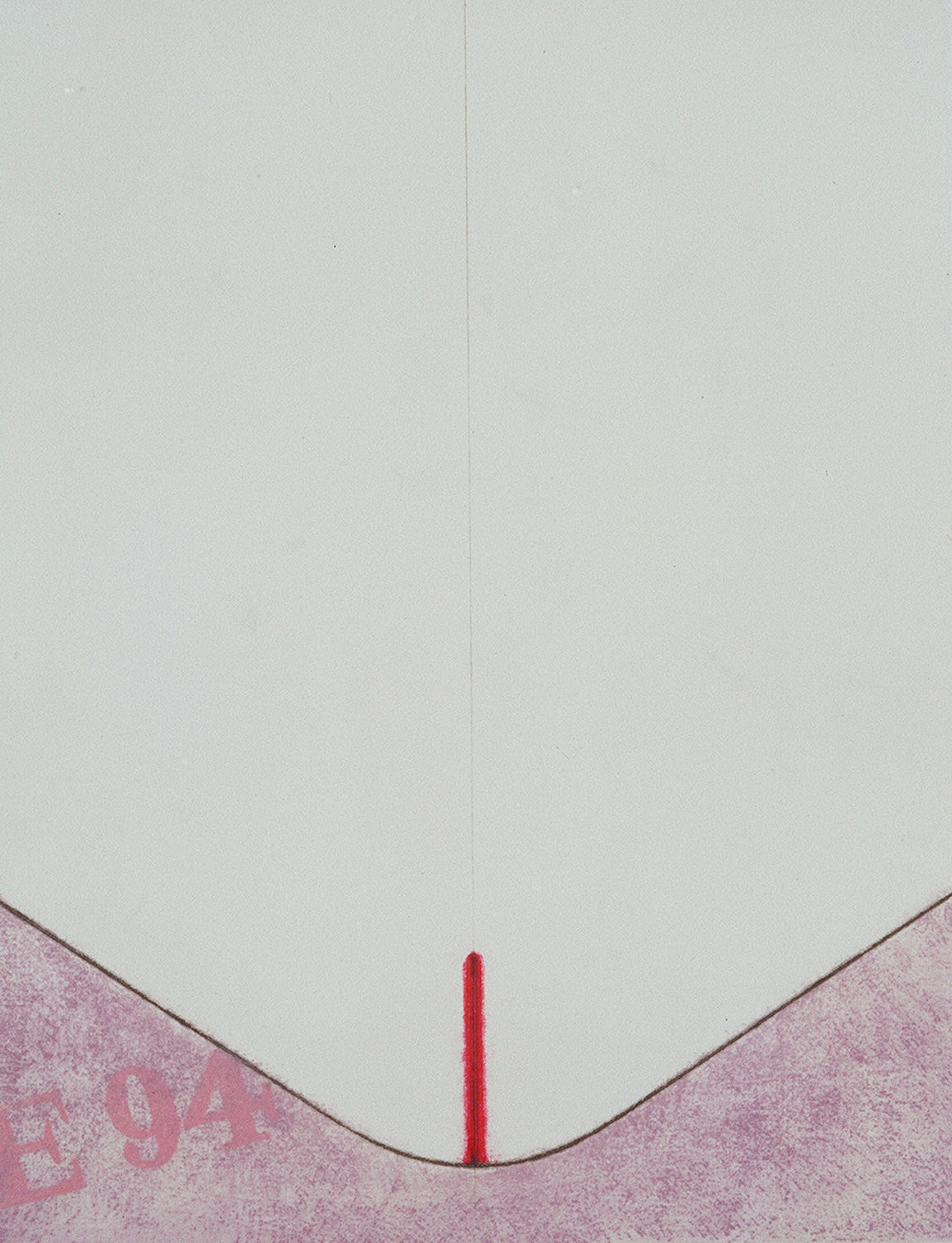 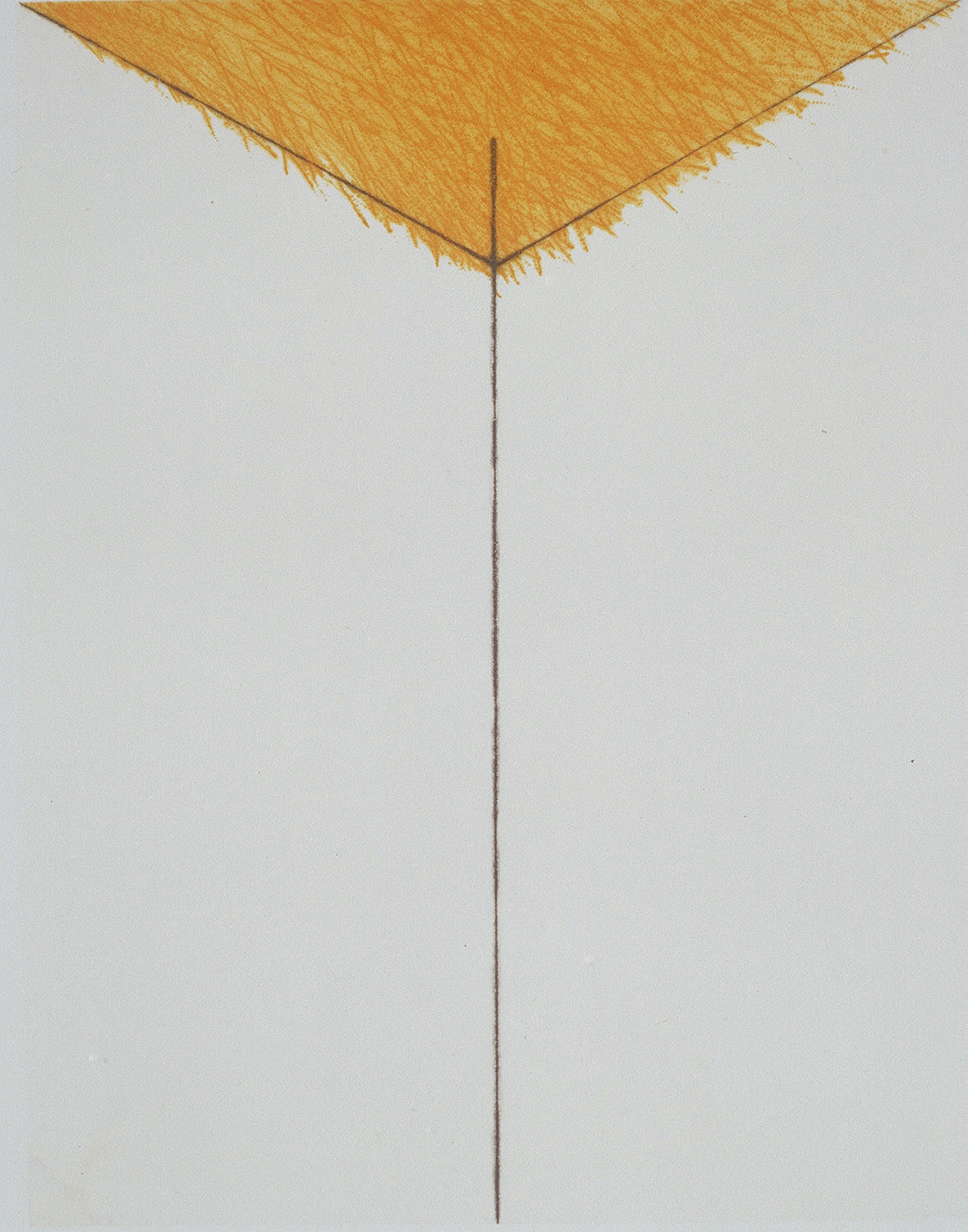 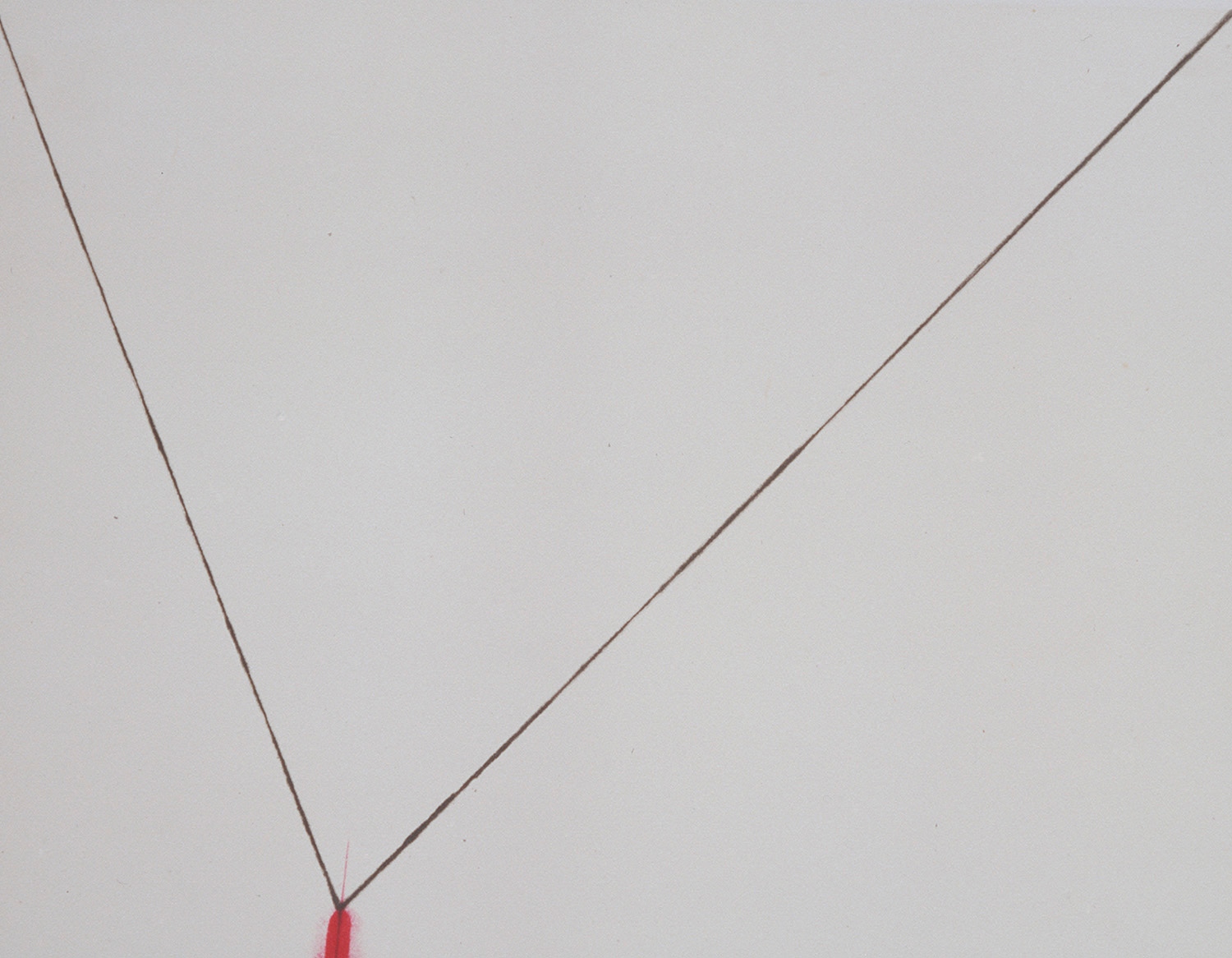 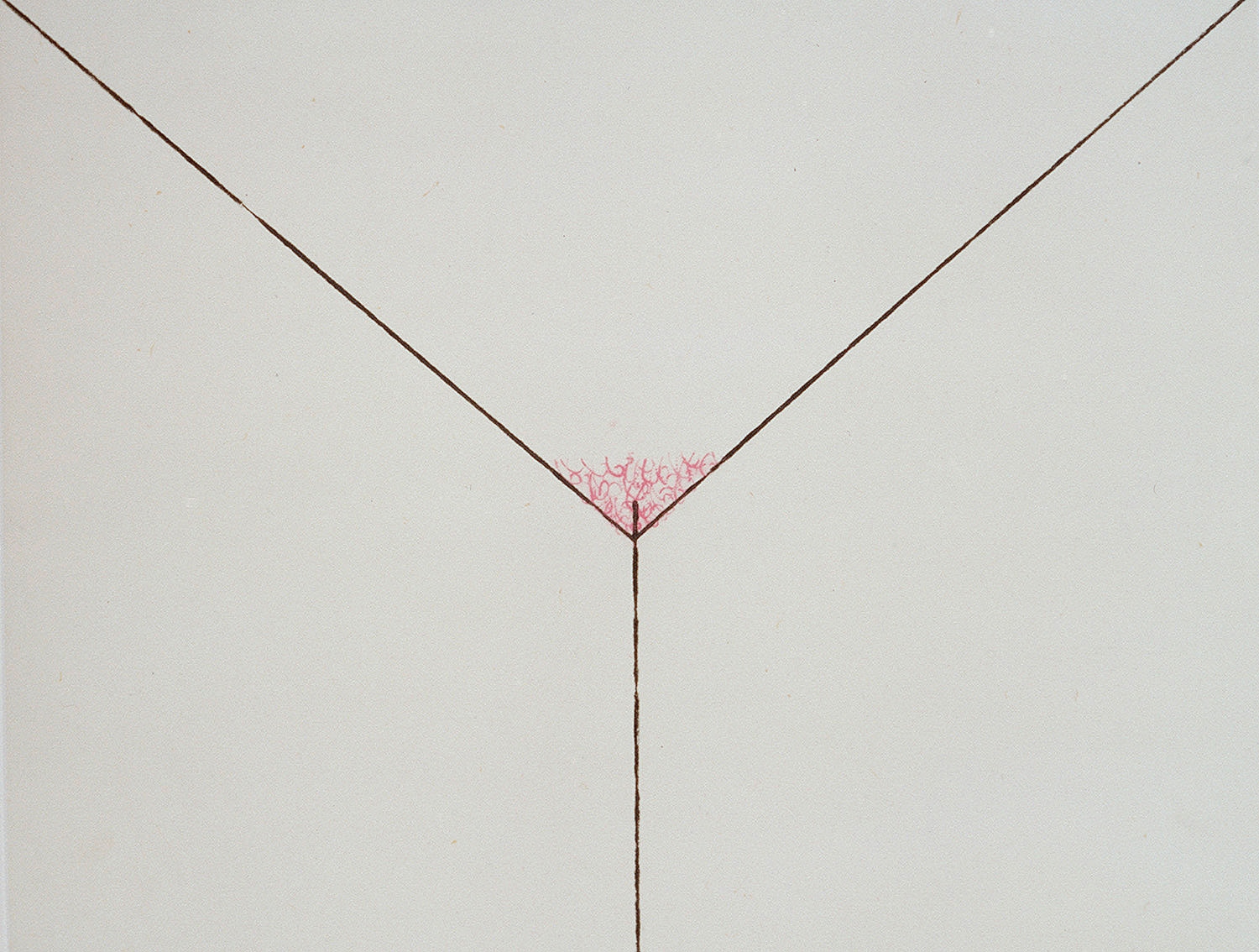 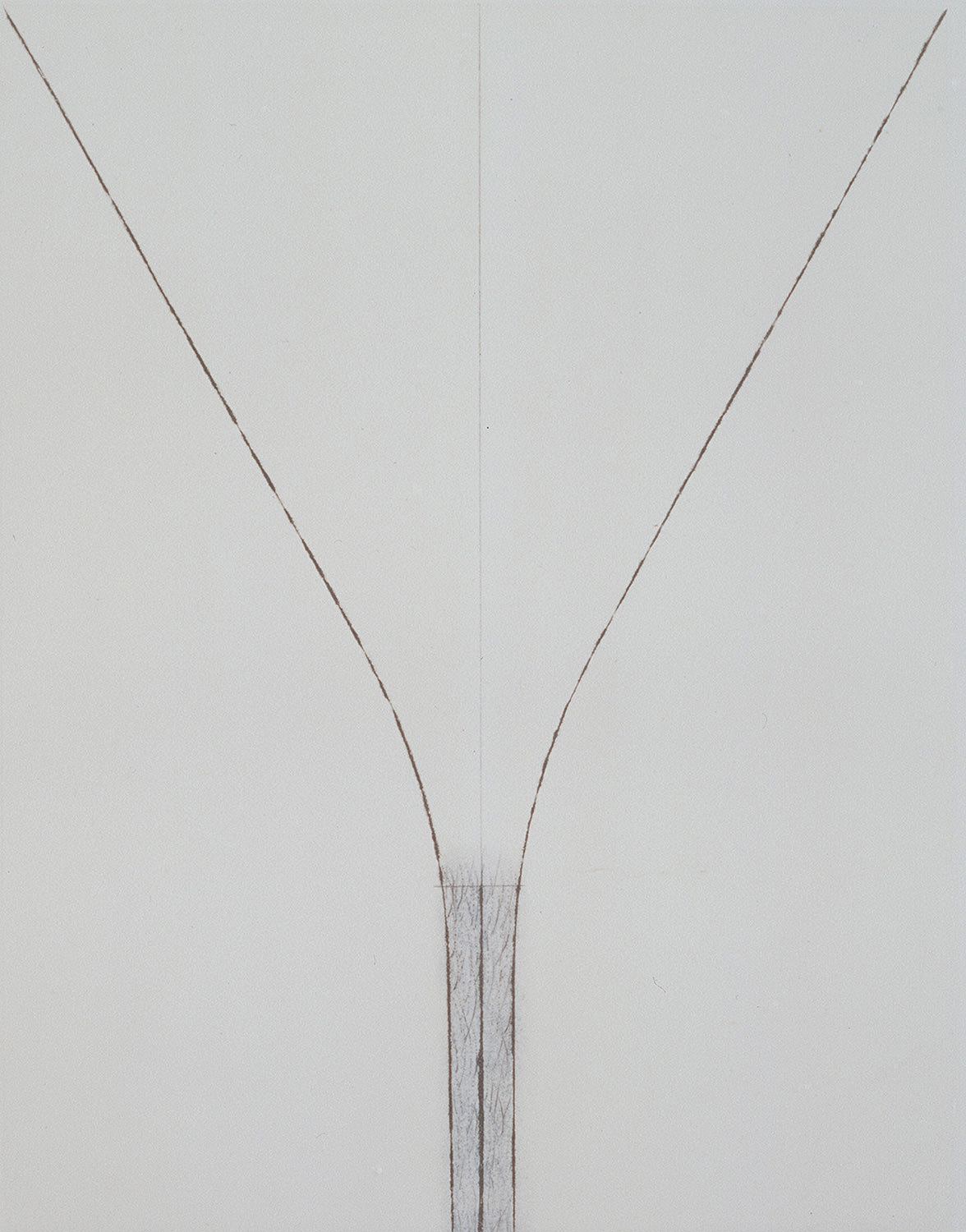 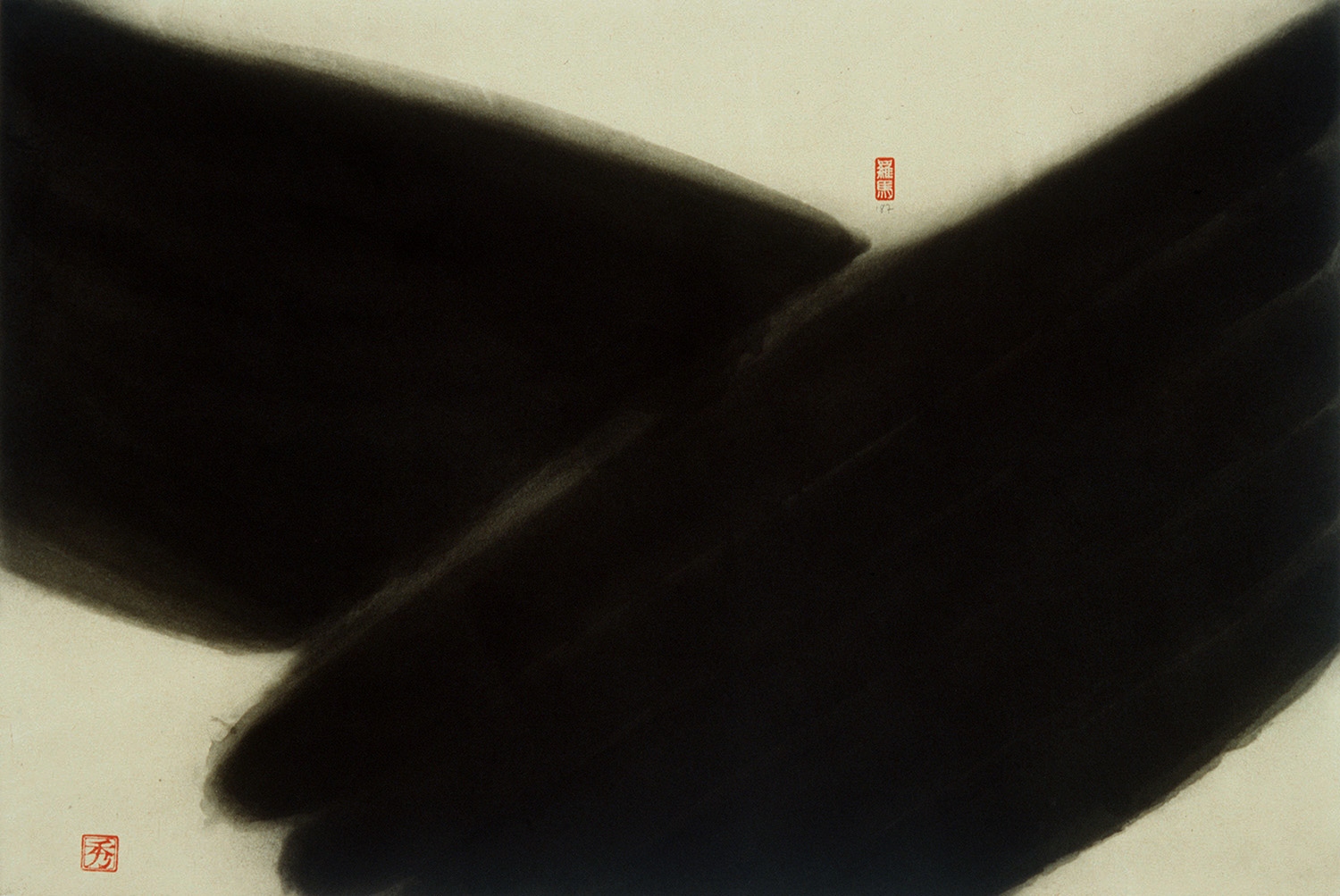 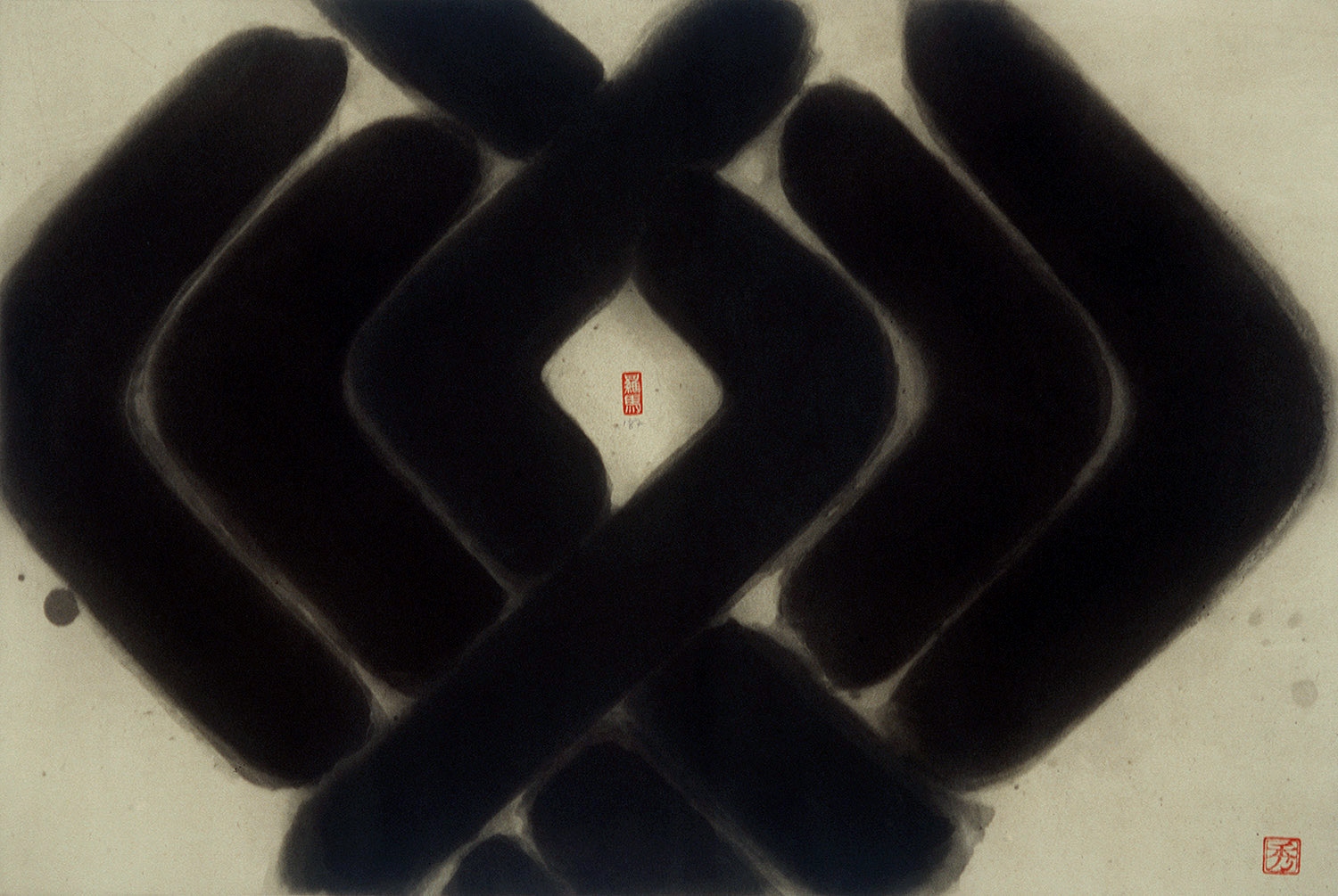 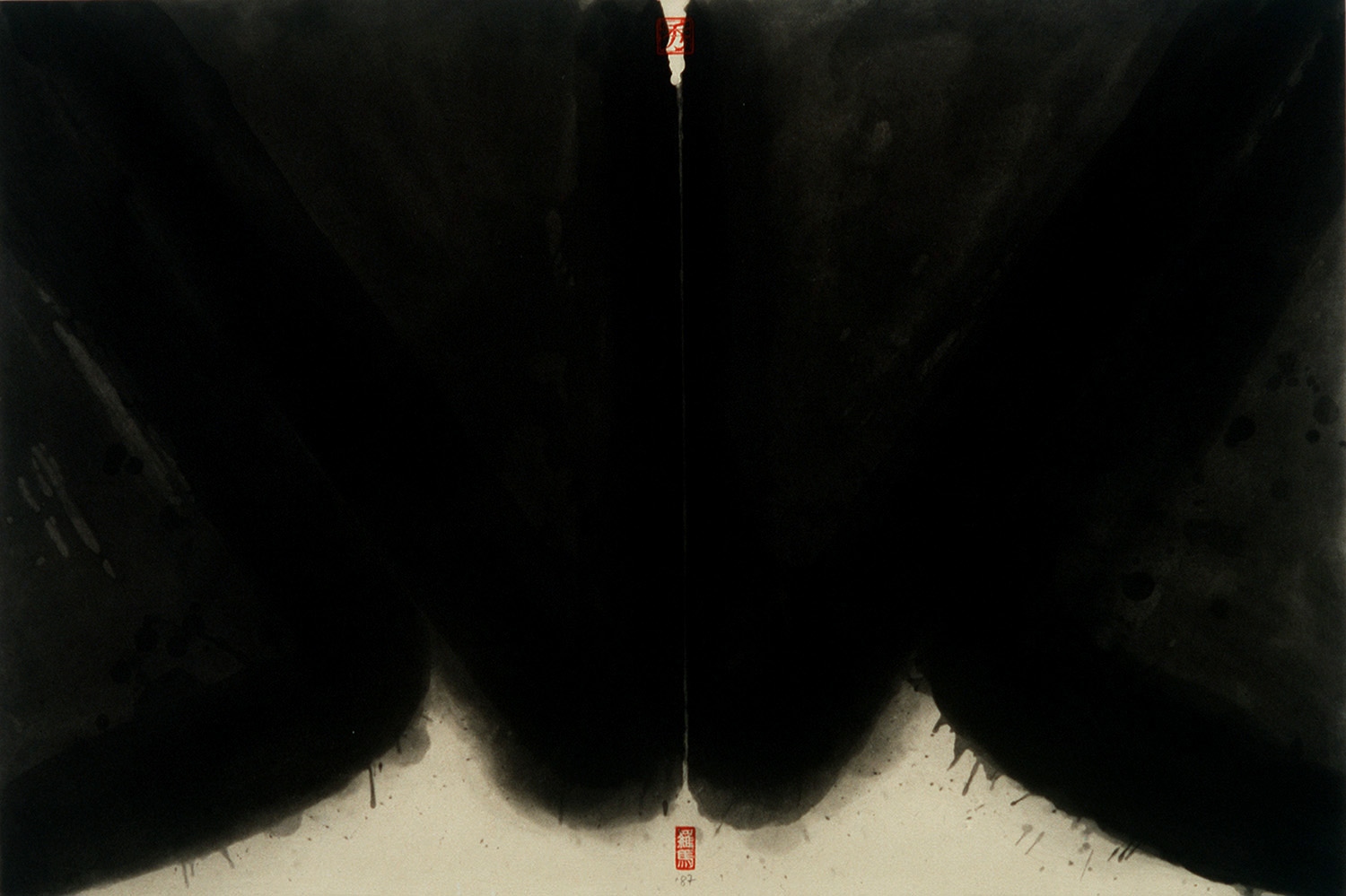 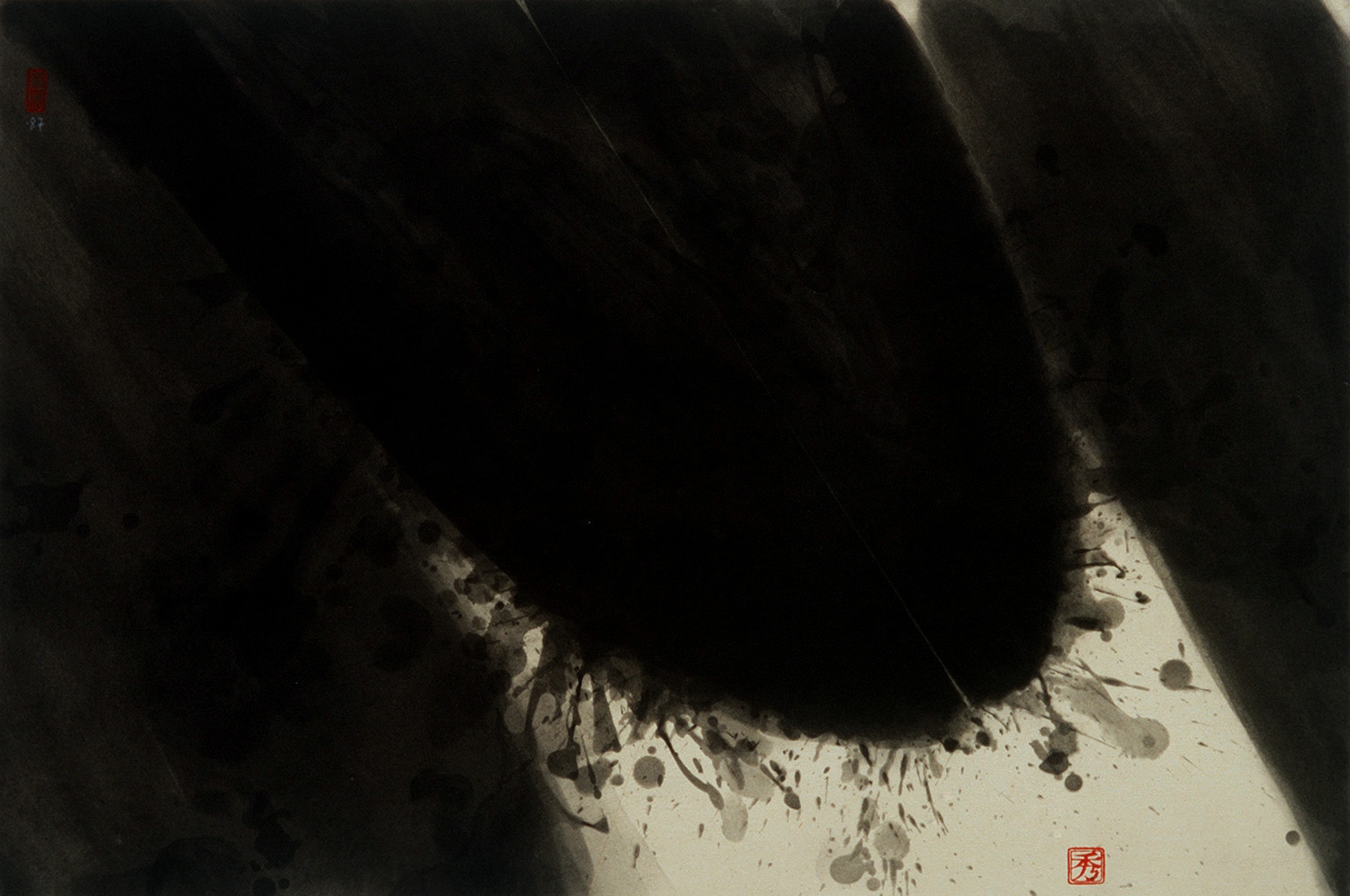 I will see the oriental parts

flow in the western

and the southern ones in the north

thus enveloping itself for the universe

with great fury, hot and trembling:

that will flow in the west.

We are "oriental", thinking of an oriental "painter" who elaborates data, gifts, to recognize, with a meditating breath and a tense impetus, we would say "tantric" (of the Buddo-Japanese "tantra"), the line as a Mater Mundi line: and Takahashi he is such a meditating artist that he deprives the written line "of its fragility and topological fiction and returns it to its imaginary substance, glassy filiform homogeneous radiant, to its curvature developed precisely in Linea Mundi, as a fading: that is, the indistinct total, and very delicate, but striped and as scratched; continuous achievement of organism, of spatial organicity, of "ideal kinship" on the one hand, and on the other the problematic mental filiation ", of which Bergson spoke, meaning together the original active situs, and the denial of transparency (again Leonardo sentences: "No white or black is transparent - because white is not color, but it is in potential receptive of every color"). And we see the work, in itself "oriental", as a spirit, as a wind, as an advent, of Shu, with Western guesses, our own: and therefore its soaring evidence against the paralysis of the "form", of the "format", of the "formal", as syntropy, as it would be in Eratosthenes; or hypertropo, as Plotinus says; or tropophagy (or also topophagy), as Timaeus of Locri seems to assert, when he praises the "white" consubstantial with the color of death and the color of life. Like an alarmed secret behind the hedge, or the frontier, or the cyclical horizon of the mater-line: the individual curves, the irrepressible implosions tending to zero-space; irrepressible pressing acute omens of the angle, of the tip, of the cusp, of the blade, of the sublineature, of the subliminal parabola: like the motions in the heart of fish, like the mythical sickle in the zodiacal tangle, like the delirious precision of the air: slopes distanced, or by nature deviates between the unknown where and when; trajectories gathered, leaning, hinged, marginal or vanished.

It is a genetic, generating, genetic line: neither rational nor irrational, neither logical nor dumb, neither spasmic nor ordered; but it envelops, tightens, covers the geometric synthesis of migrating, erratic tensions, and intimate to the schematic experimentation of fields and limits of enunciating itself as a principle of fluid or uncertain action, between flight and equilibrium, between stasis and fall; as, or perhaps a principle apparently similar to what operated in quantum science half a century ago, when it was seen that particles behave like waves: that is, of a particle it is not possible to know (or "see") at the same point the position and the momentum, the expansion and the measure. Placed inside a principle, that is, inside an intimate organism of unlimited degree, the figuration of motion, or tracing energy, on the signals impressed by Shu, configures an image devoid of mass, but illuminated by a charge; with direction to infinity and to zero quantity. Its imagined reality, existing and simultaneously indefinite, consists in the simple iteration, in the continuous "proof" (what the alchemists called "reprobatio"), in the approximation, or absolute concordance of the elementary signals, or the sum of all probabilities: again, the alchemists said design of the wedding with space, Coniounctio. Therefore it is the writing-painting of the great, of the greater Line, that scissipar, in the pursuit, as towards prey or ideal target, of the inaccessible model, always in the distance, of the describable world: the very slight shimmering Line sign, or spark, of what it is the Pondus Mundi, the weight, the gravity, and the Grevezza. The Line which, intuited and sown, allows (or promises, in visible compromise) to foresee in figures, as co-efficiency and periodic vehemence expressed by the pulse, and in the disessentiality of the world. In the dispersion of the analytic / synthetic game, in vibration and oscillation, the Line becomes a chord or trace or uninterrupted segment to recognize the seed of the figure, or of the fiction, fictio, which does not give an end to its explicit declination. In the cadence of the thresholds, of the boundaries, of the contemporary limitations to the results, conducted under the impulse of quiet and pressing drawing, the tumult of the expiring Density, of the free and unaware project of the subtle air, of the pangeometric revelation is exercised; the suspicious revelation of the autonomy and antinomy of the "continuous", the lucid energetic sounding of the very intimate area of ​​our seeing, of the power identified in the intimate.

Thus is attested, then, it is asserted, the pensive anecdote of Shu Takahashi's paintings. As a spiral of the existing, as a drift tympanum (a sound, or flavor, as the breath of the metaphysical virtue of the Vairocana, symbol and energy in the central nucleus of creation, the Japanese Roshana; the bronze toll in the air of a stupa) ; as a fascination, almost intoxicated, of the grace of limiting and of the memory without a body, as a blow to the greater latent balance of the oblique purity of the great myth, of the ancient antiquated archaic echoing presence of the "logical space" (the Aristotelian communis: where, however, precisely , the artist-painter may prefer probable impossibilities to improbable possibilities; that is, what we would define ímmunís), and instead as ìncreated, as a perennial migration of every anecdote.

Its surface is absolutely thin, it is given subtilítas, in the sense of velarium or Iisionomic membrane ", and relatively undisturbed, like the window of the other - where, of waiting for vision, of indeterminate simplicity, of desired suggestion, distilled and very high intensity of light: it is generated only by the displacement of the symmetry spectrum-screen (valve to conjugation, to push, to scalar prerogative of the synchronous, of the polarized, of the graduated, of the simultaneous, of the dynamic encounter and of the friction, of the cue, of the con-location with a selective, contemplative and almost liturgical role ("Shinto", as a fluid scene, as a vein and precious recreation): bed of homogeneity, scanning and extension of the shot; equivalence of the freshly irrigated continuum of "row", of memorable color , limpid subdued threshold of mental color; with even news, (sic vulgus inquit), of elegant invention, which starts from the backdrops of a superb stylistic civilization of, in fact, extreme- Orient. Where the surface engages and welcomes, like a swarm of instincts or exhumed polarity, the enigmatic coincidences, in amalgamation and contraction, in tendency and tangle, in knots and in absorbed relaxation, in fluid reading, almost dripping veil, the correspondences, now immemorial, between symbol and symptom, between muted sublimity and plain ideography (sublimity in the prospectus, ideography in evocation): like these (which we find throughout his work) indications for hendiadys: the dome-abyss, the eye-vagina, the trachea-ianua, the heart-parabola, the eyelid-pagoda, the humerus-parallax, the pondus-podex, the axillary-asindetum, butterfly-cloud, cell-transvulus. For which we ask ourselves, from memory: will they be signs of love? impenetrable essences of revelation? signs of the vacuum-continuum? of the six cosmological comparisons? paradoxical degree of the identity of the world with its own silent, incessant catastrophe? or salvation of involuntary memory, daughter of the corpus incertum, of the os infirmum? coexistence and indifference of originating characters, and dimension-privilege? radiant theme and incarnation? iteration and diversity (Proust: Ia méme et pourtant autre ")? incarnate doors, and flames of angles as from reincarnation (avatar) of Sigla, of Seal, of Orma, of Character: the bottom of a cup, a porthole on the abyss, the embryo of a cosmos, the shadow of a transit incessant, the collapse of a drapery, an exhausted, submerged thickness, certainty and necessity, immanence and firmness, essential climates marked by peaks, blades, spirals: this animates the surfaces of Shu, which offer, each one, the soft and enchanted injunctions, oaths or conjurations, thesis against the lump of apocalypses, against the deleterious game of eclipses: the spectacle of hypotheses and tensions, traces and implosions, which transforms into an oracle and transforms the "theater" of painting into a natural measure emergence; in the giving of shots and movements, similar to the tears and sprints of the bee, or the sparrow, or the lightness of the petal and the springboard branch: from petal-altar, from branch acrobatics: in the form and scent of ancestral, ancestral dark circles loopholes, of ancestral horns, of free-falling profiles, with emotional bending of all the elusive, which is wave and area, which is footprint and norm: as in the triangle with apex and vertical incision from the top to the base the Lower Part still runs of the Present in One, that is, Space Delimited by Signs of auspice and perseverance; and hope in the End of the Night: all this anxiety written in the triangle-symbol, triangle-emblem, so fundamentally cultivated by Shu: a triangle that in Chinese writing (I remember the ideas of Ezra Pound) flows as versatile as notion of union of assemblage of a junction, and come heaven (t'ien), and come the end of the night.

The shortest way between two line moments is the way of the longest moment: which is the atavistic moment of the certainty of appearing, of nascent and evanescent borders, the integration of the suitable in the slight definition of the shadow that is matter and color: therefore “figure”, so clearly accentuated in Takahashi's work, as an area of ​​connections and intervals of the absent, integration of the vacuum, network of radicals, variances of perceptual intimations, process and temperature.

And there is even, among atavistic insinuations, a light of a “Mediterranean” as an archetypal sea, not maternal, but androgynous: an acute parable, rightly dominated; a prelude to the infinite sweetness of the nest and wave soul; torments of unexpected orientation, acrobatic marriage of capture and transposition, ethereal brawl of fragmen foeminae; trophy or rose or migration heart outlined in unum; genesis of sore and laceration in the absorbed mind; obolus of uprooted meteor, filed and parched meteorite; valley and whirlpool and tunnel for future icons, for paleo-bosatsu (or boddhisatva): in short, in the painting of Shu, mature ecstasy and simple contact of ridges in probable surrender towards the mythological Apsu, towards the intimate abyss: that is, the maps isomorphic of a cosmos emptied and left free to its free trajectories, to its prominence consumed waiting by the heart, as in shady monasteries with long syllables murmured in the throat, with a problematic parable, with un withered piety: the flowering mulberry of the soul disturbed by the chirp of ultimate silences, borders of a forgotten food to its ripples of holocaust, ashen, incense. Limb-limbs from a triangle and the inverted triangular pyramid, the wedge-shaped triangle-phantom sectioned into a magical and hermetic confluence, as of centralization of energy, of accumulation of force in pure seeing (of mandala type): so to know or guess of what the complex / perplexed conception (or image) of the world is made: that is, the unity and vanity of the immense image.