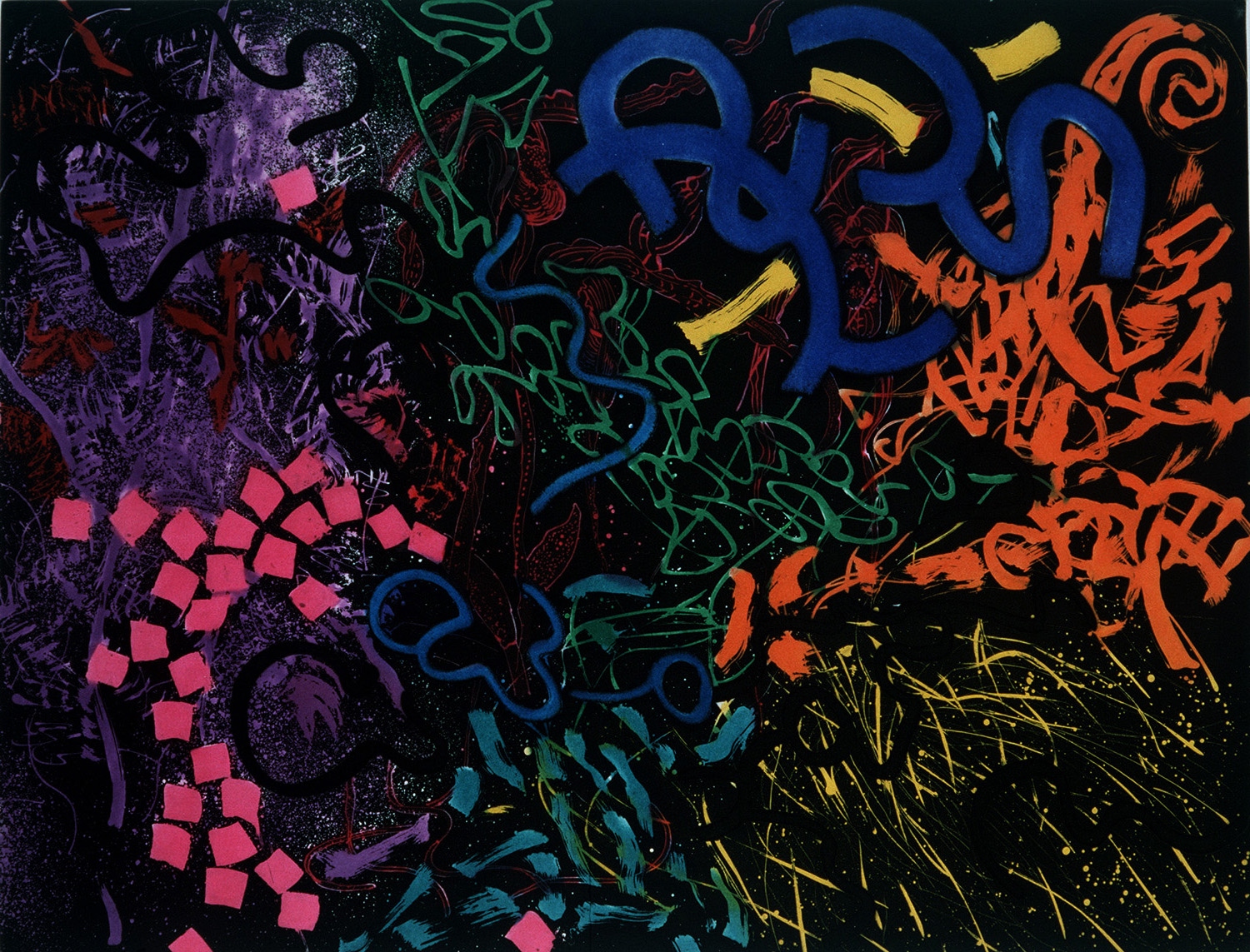 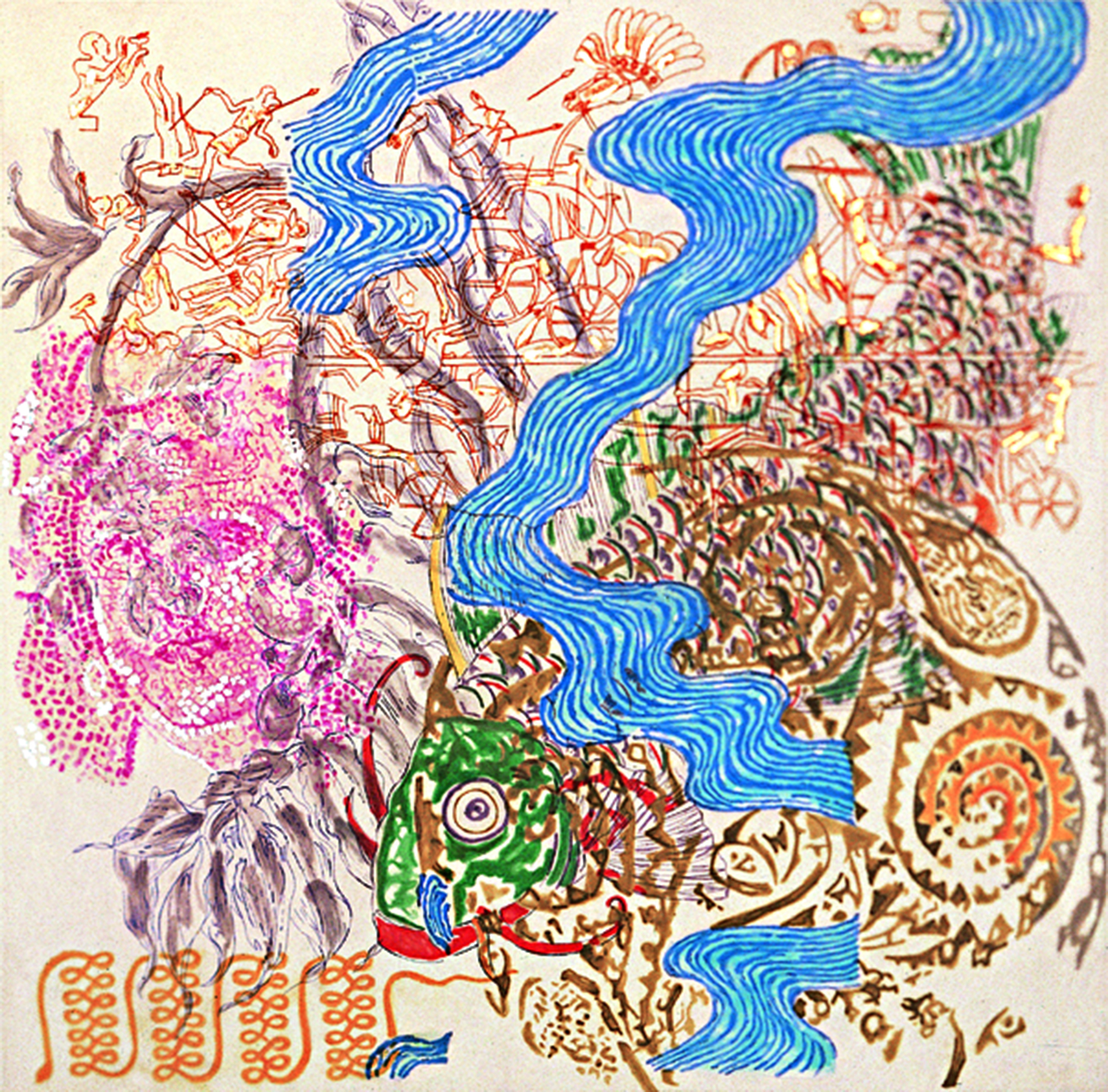 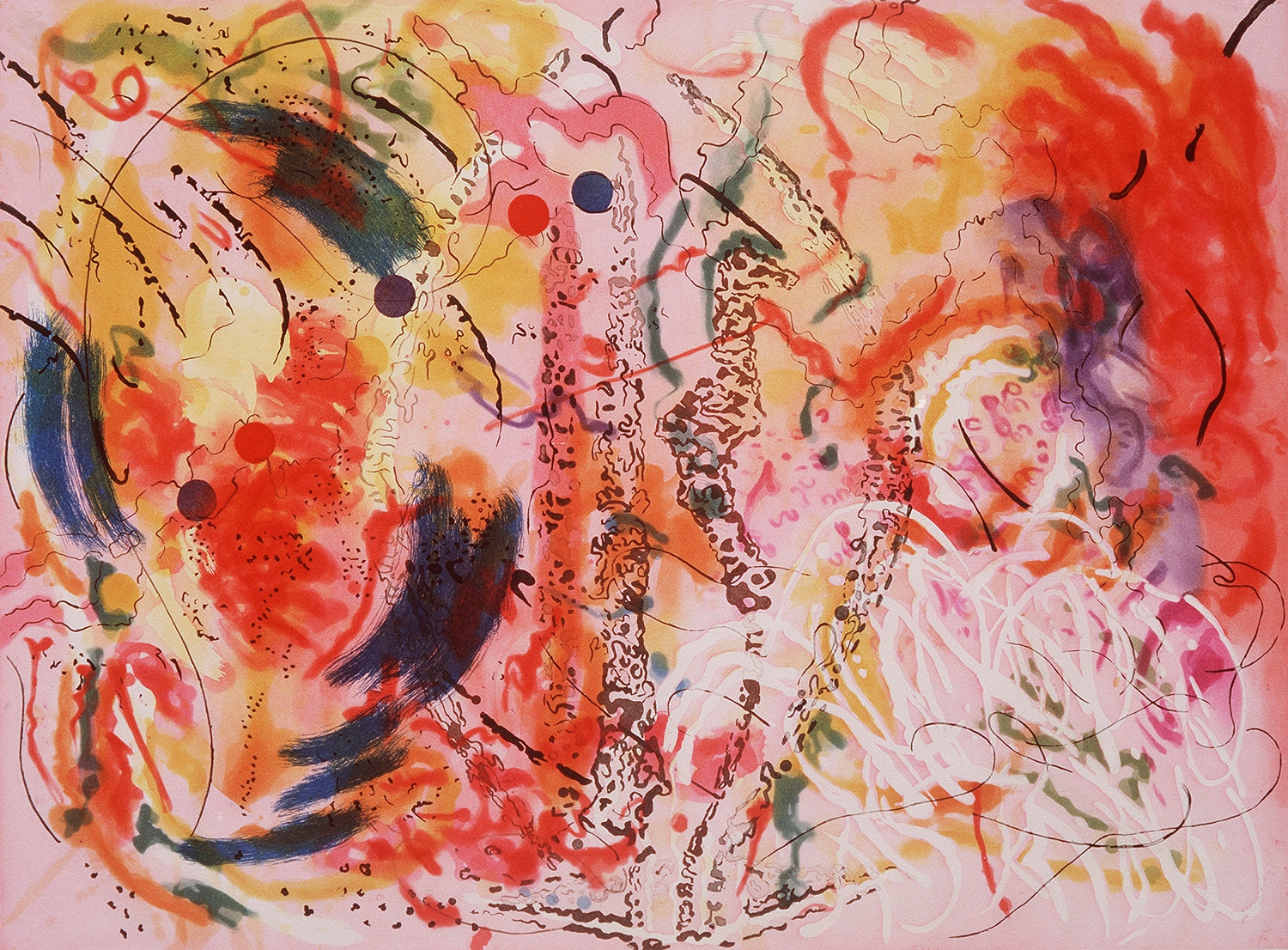 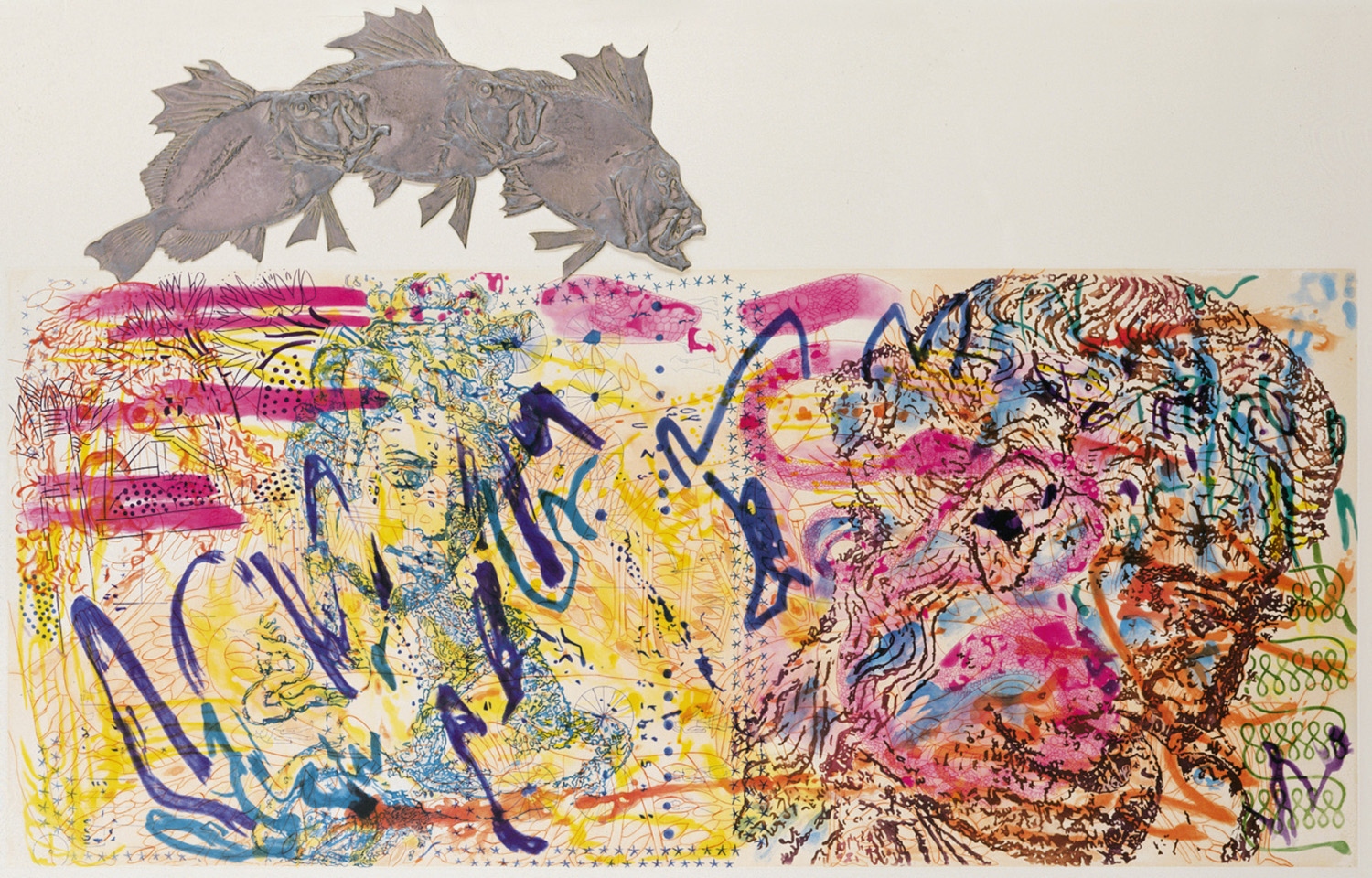 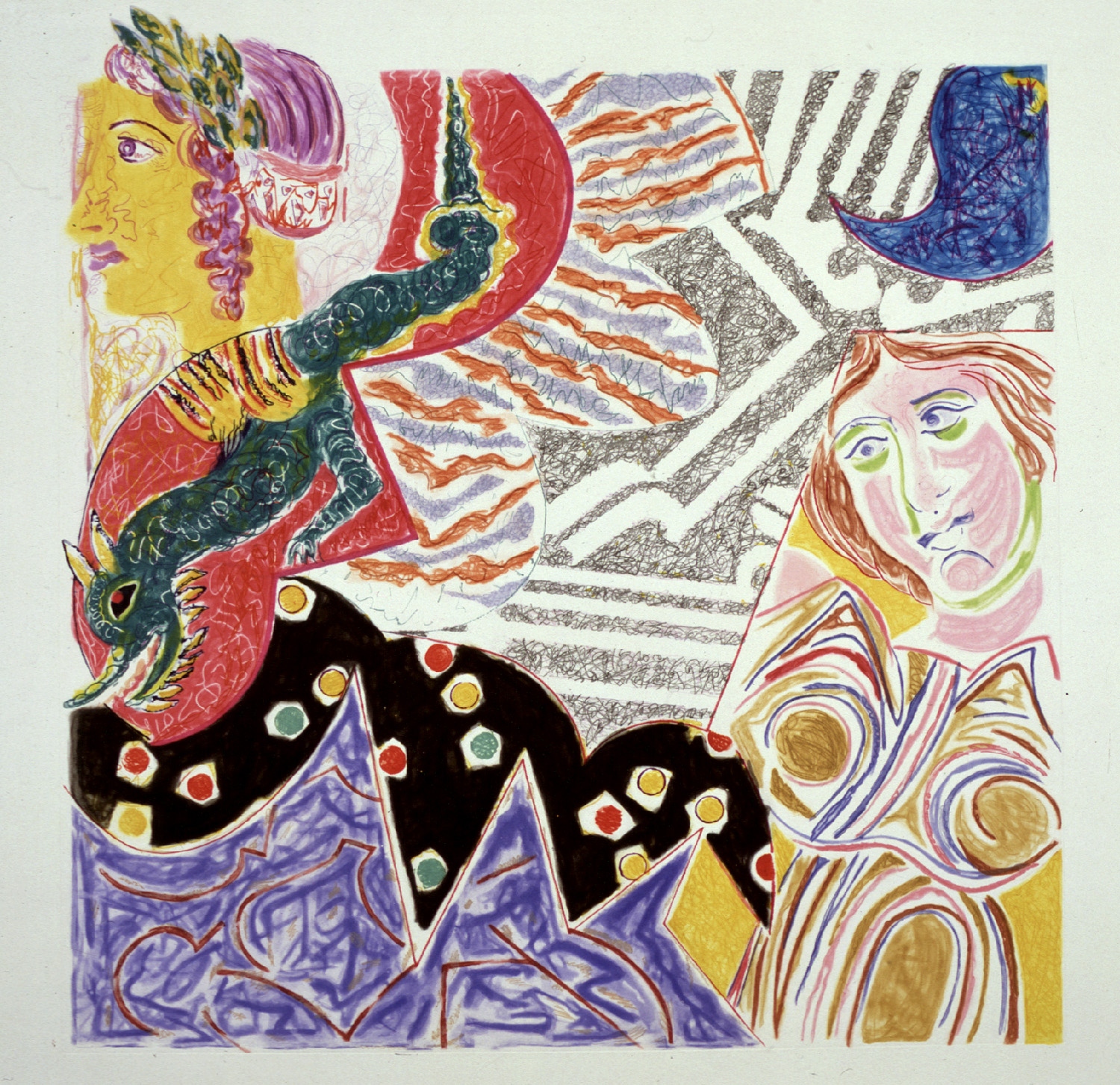 Danny Berger, after having worked with us for many years at the XNUMXRC Gallery in Rome, returned to New York and resumed directing the Mezzanine Gallery, a department of the Metropolitan Museum.

Taking into account the printing experience he had had for years, passing all the graphics we had produced up to that moment into his hands, he did not take long to introduce them into his circuit, organizing splendid exhibitions and presenting the various prints that we published gradually.

The Museum itself proposed to print artists with whom they had relationships on their behalf, one of these being Nancy Graves.

Nancy Graves, sculptor, known in particular in the world of American museums attentive to quality, very shy, very refined, on her own like a wild cat out of the den and a very hard worker.

Her father, Anthropologist Paleontologist, had strongly placed her in a very complex and, at the same time, formative space of fantasy. All nature, from its origins, including man and his habits, was present in each of his works, to the point of representing even useful objects, as found and assembled, removing them from their use, as if placed in a display case.

I must admit that working with Nancy, having her on a continuous basis as a guest in our Ara Coeli home and studio, was a real pleasure because she knew how to organize herself and, with humility, tested the technique I suggested with total optimism. He practiced for hours, with considerable physical effort, which did not surprise me; having seen her work in her studio as a sculptress, I knew how much dexterity she was capable of.

Already with the very first recordings the results were evident and exciting, to the point that with the second experience, we faced a great dimension entitled: "Paleolinea" 1979. I understood, with that engraving, how deeply rooted the idea of ​​origins was in her, so distant in time to represent them as a colorless graphite where the smell of time remains.

It was Nancy who introduced Eleonora to tropical botany when she began giving her pieces of her beloved plants that she grew in her New York studio.

The feeling was not that they were there for aesthetic reasons, but as models that she often used in her compositions.

Despite having a studio in New York, two blocks from our loft, Nancy came to Rome every year, where with Eleonora she took long walks in our garden and in the adjacent wood, and returned with seeds, leaves and all kinds of insects and useful things. to his imagination. By now she was convinced of the need to use the two studios in Rome and New York which gave her, in addition to the continuity of work, the feeling of being part of our family and also enjoying the intimate aspects of a sincere friendship.

The creative stimulus for Nancy came from far, far away. Then the work, as it grew, was enriched with precise elements, mostly organic, which were part of that famous research. Research that did not stop at concrete objects and things but often with texts, symbolic words, images captured by books, codes and the famous school of his father.

The large copper plates were born with a certain destiny of having to be transported, or rather, sent several times from New York to Rome and vice versa, because, even if dedicating whole days of work with an almost maniacal methodology and constancy, they could not be finished. in days but, due to their complexity, in months. The work resumed in the next location, without leaving too much time to complete or advance the technical creative process.

"Stuck, the flies buzzed" 1989, begins in New York, but the Artist almost feels the need for his plates to go to Rome, and here he enriches them with an infinity of strongly Greek-Latin contents, then they return to the United States where, with Eleonora, Nancy finds the colors and, on the basis of the first tests, feels the need to add other elements to balance the unfinished composition.

At this point the slabs return to Rome where the work is finally completed, adding a bas-relief obtained with leaves and flowers from our garden.

We were able to make two other large magnificent engravings; always in the spirit and climate previously described, we were projected to reap great satisfactions in the years to come and, certainly, Nancy's journey would not stop.

Only his sudden death interrupted our magnificent journey.

Davide, my son who in those years lived in New York where he was attending university, had taken on the responsibility of filming the artists who worked in the studio with the camera.

In those shots there are moments of great intensity and richness of Nancy's expressions at work, surprising. Especially his breaks after a feverish physical fatigue because for hours he used tools where it was necessary to put strength and tension.

His young and beautiful gaze in the close-ups that Davide was able to capture, confirms his mood in those moments, and it is what remains in our hearts.