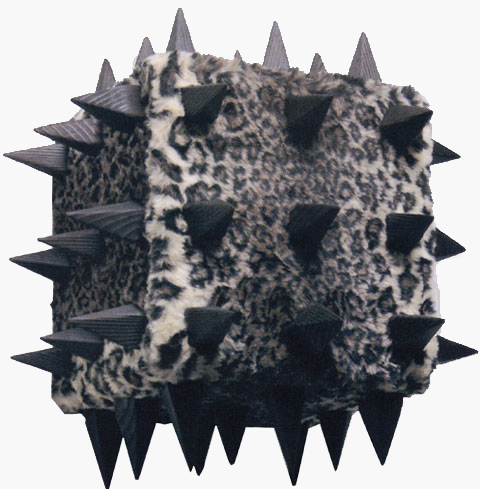 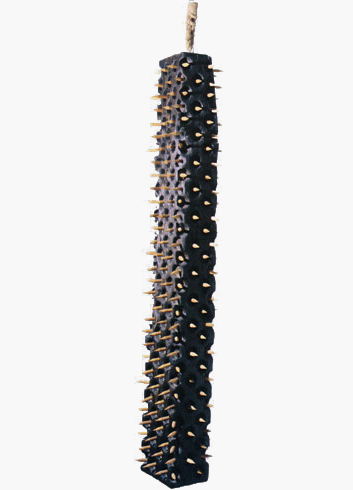 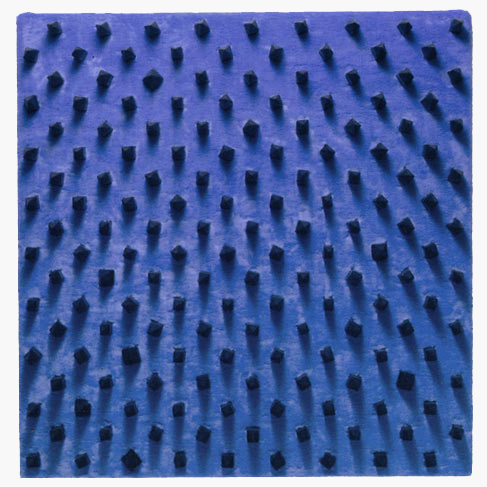 Thought. Manualism. Visible ambiguities, tactile ambivalent. Ambivalence of forms and their plausible meanings. Objects that work on our senses, on primary drives. On thinking. And that act in us through a primitive and cultural mechanism. What comes out of it? An unclassifiable project, synthesized with mature ideas and decisive manual skills.

The works in question can be admired on the following pages and in the live-set of the gallery. Their author is called Simone Lucietti. He comes from Veneto to “bite” Rome together with his second solo show. Also this inside the space of the 2RC. Under the guidance of Simona Rossi. And (today) of a undersigned who sniffs the creative ambiguities of flowing (and unclassifiable) thought.

What comes from Lucietti's head (flowing thought)? In the 1999 exhibition he inserted the danger of death tags between surfaces of colored plush, between aluminum studs or between optical design grids. Today the sharp spikes are one of its central (s) punt (on) i. The large wooden thorns cover projecting structures, cubes or voluminous panels, vertical elements such as the impassable staircase or the stalactites that descend from the ceiling. The thorny shapes often emerge from (fake) spotted furs and from other surfaces with soft presences. Colors candy pink or bright yellow, misty gray or relaxing blue, caress white or deep red. A range that affects the warm form of those erotic fabrics, warm by nature, snug.

But this is where the short circuit begins. From the moment in which every tangible certainty crosses its opposite and the appearance of its opposite. By opposition we mean the connection of the hides with the hardness of the wood and with the sharp quills. You will immediately perceive a deadly screech: soft beauty that attracts, violent hardness that rejects. In fact, the ambiguous form creates only an apparent contrast. We sense conflicts that actually arise from our gaze, from social habits, from various historical impositions. Lucietti combines pleasant and repulsive elements. It signals the danger mixed with tactility, the instinct to approach the reason for distance. It invites you to relax while it warns of a hypothetical alarm. Contaminate pleasure with pain, good with evil, beauty with strangeness. It makes what we usually fondle or avoid abnormal. In the end we don't know whether to be afraid of the spike or the colored skin. A state of total confusion follows us, of events that are no longer in control. And here our instinctive models of beauty take their place. Where fears and satisfactions fluctuate. By fueling the strength of the most authentic decisions.

Lucietti teases the fetishism that leads to colored, soft, welcoming things like perfumed caresses. At the same time, it reminds us how violent entities can satisfy the dark sides of the human species. A continuous contrast between elements that repel each other while attracting each other. A project which, similarly to human conscience, feeds on unnatural but inextinguishable nonsense.

Fetícism has always been desire, the drive to possess what our head makes precious. We alone decide the rules of fetishism. Sharp high-heeled shoes, stockings and feminine feet remain known forms of male passion that sublimates sex within some absolute details. But fetishism goes much further, towards unexpected and original selections. Towards a colored fur or a thorn. Towards tickling or pain. Towards a hand that caresses or leaves burning marks. Fetishism is body and spirit in a perfect connection. Fetishism is ambiguous by its nature.

Ambiguity and ambivalence. Two terms that Lucietti weaves around the volumetric physicality of the pieces. "Ambiguous" becomes a crucial term for our electronic age. IT progress is growing dramatically, changing the perception of time and space. Conversely, digitization and microtechnology connect with more elaborate urban architectures, fast transport, meat modifications and more. New technologies act on the body of things, on pliable matter, on the truly bloody. There would be no need for electronics aimed at one's own virtuality. Computers improve our work, plastic surgery helps beauty, new materials safeguard health. In short, every evidence always works in its ambivalent logic. The ambiguity of e-electronics lies in the material dependence on heavy bodies. Similarly, physicality secures a better future through the contributions of the latest technologies.

Ambiguous is anything that holds an epochal complexity.

An ambiguity is a necessary implication for applications to be evolutionary.

An ambivalence belongs to every ambiguous form of our present.

The ambivalence is about the best contemporary art. The one that is born with many questions and no answers. One in which the opposing forces generate a conflict.

Lucietti represents a subtle border between sculpture and painting. His world mixes painting and volumes with inventive intelligence, sensitivity for materials and depth of content. His art remains ambivalent in the mental path, ambiguous in the form of the works. Consequently, ambiguity arises with thought: and ambivalences lurk behind every aesthetically ambiguous aspect.

However, handle with care.