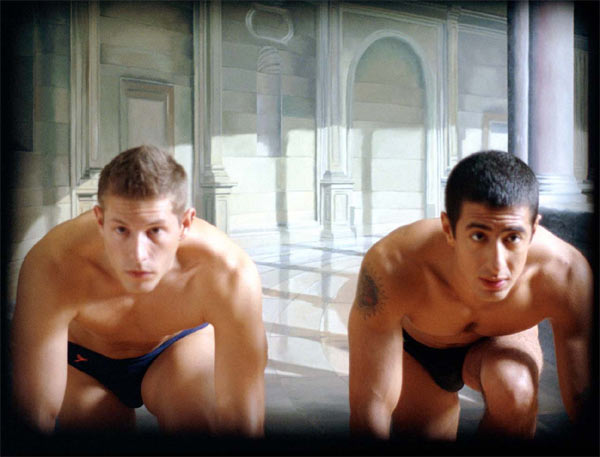 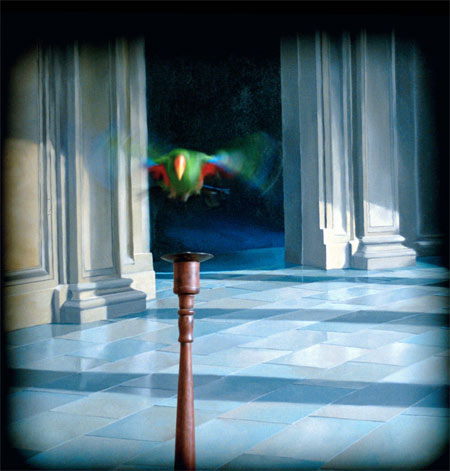 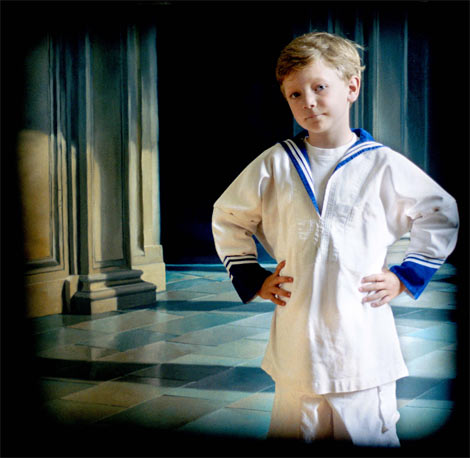 In this exhibition of two large oil paintings on canvas and a series of XNUMX linked photographs, the Dutch artist Max Kreijn plays with the senses of reality, theater and beauty. His recent works describe the fine architecture of the rotunda at the Alhambra, the ancient palace of Granada, Andalusia. Stone columns cast long shadows across the polished marble floors, curved arches and deeply recessed doors. The light is penetrating, the colors bluish and the atmosphere mysterious.

Alongside these paintings are photographs of nudes, a parrot and a boy dressed as a sailor, posed in front of the same backgrounds, and in the paintings. A couple of athletes are shown before, during and after a run. In a single image they appear frozen in victory as they reach the finish line. In another series, partially inspired by the character of Tadzio in Death in Venice, a young man shyly returns his gaze to the observer. Her expression is shy but self-confident. Meanwhile, a brightly feathered parrot takes flight from its perch, flapping its wings in a hue of flamboyant color. Like the narrative behind Kreijn's imagery, similar to a film, each photograph is a work of fiction, based on his idea of ​​capturing what he calls "the intimacy of the unknown".

Initially, the models are photographed in the artist's Australian studio, posing in front of Kreijn's very realistic oil paintings. Although the paintings become mere backgrounds, the figures are credibly part of a grandiose European scenario. One of the models, Lee, wears an amlia white shirt, standing comfortably like a noble at home in an empty mansion. Another of the models, Ali appears in a sequence of moving silhouettes. Her blurry, naked body looks like an expressionist brush-stroke painting, while the background appears to be solidly constructed from ancient stone. This is Kreijn's conceptual reversal of truth.

Since the XNUMXs, Kreijn's works have been exhibited in galleries and muses in Italy, the Netherlands, Ausralia, Spain, Belgium and the United States of America.

This exhibition, with the support of the Dutch Embassy in Rome, is Max Kreijn's second solo show at the 2RC Gallery. All the works on display will be reproduced in the forthcoming book “Double Tke”, which examines 25 years of Kreijn's paintings and photographs, which will be published next year in Berlin by Jovis Verlag.

The exhibition also clearly reveals how the works of some contemporary artists currently defy any nationalistic classification. In this case, two models, one English and the other Lebanese, were photographed in a Sydney studio in front of a painting by a Dutch artist representing a Spanish palace, and now on display in an art gallery in Rome.