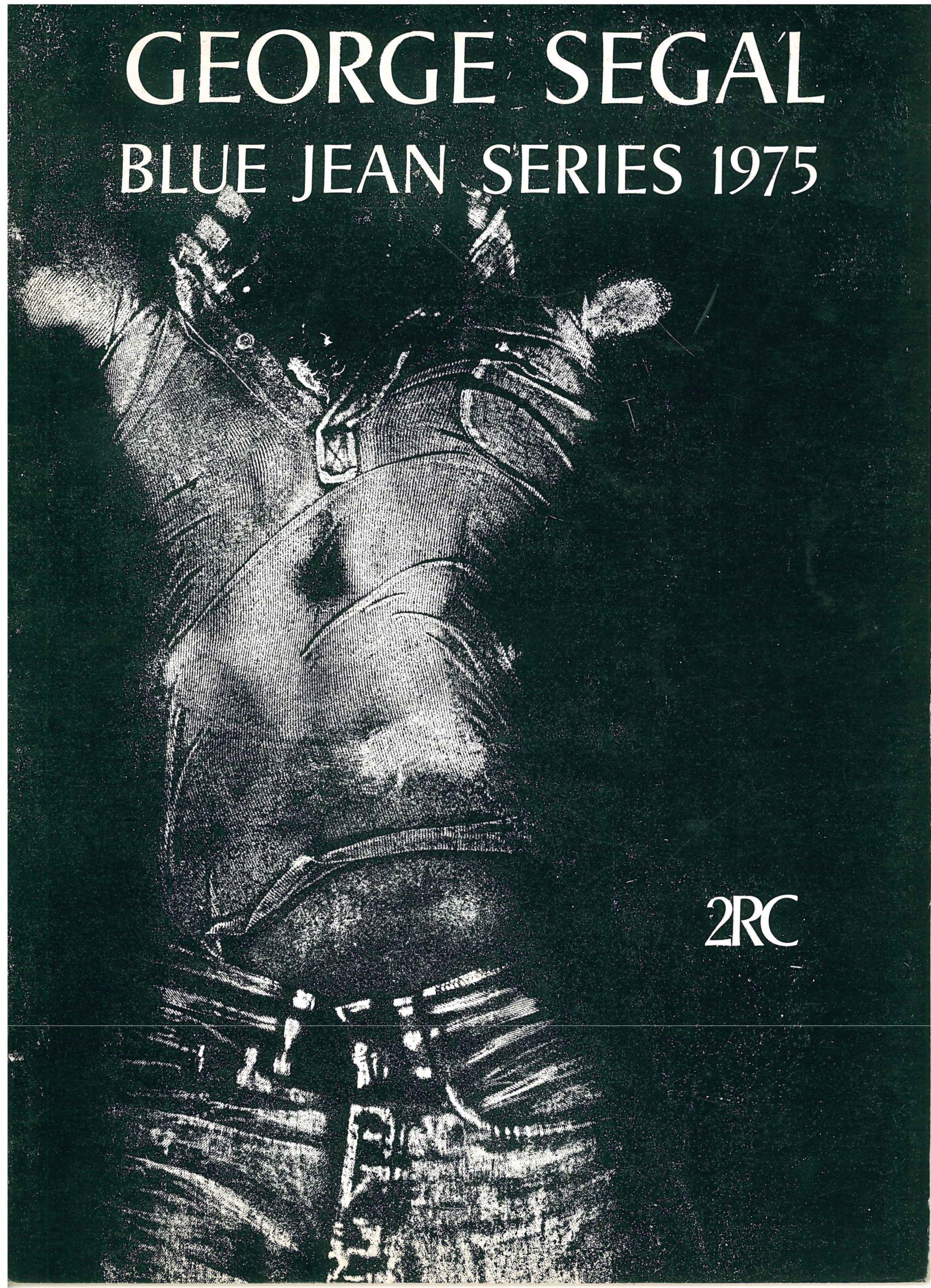 Nhe last fifteen years, George Segal's plaster sculptures of individual figures or groups in environments have intrigued and perplexed viewers by the juxtaposition of the literally real with the technically and aesthetically transformed. Using everyday situations and familiar, even mundane patterns that he usually knows personally, Segal has developed a visual language characterized by a fondness for embarrassing, bad taste. A painter dissatisfied with the limits of two-dimensionality, Segal, however, highlighted in his sculptures distinctly pictorial concerns, especially in his evocation of a space that is perceived both frontally and three-dimensionally, inducing some historians to place his work in the context of the pictorial tradition of '"American Scene". Until recently, his interest in color was mostly limited to the choice of real elements in his sculptural settings, or expressed in pastel studies.

In 1974 Segal's interest in fixing the bodily attitude led him to create a certain number of relief fragments that made him partially renounce the theatrical character of the previous environments and allowed him a greater focus on the particular in opposition to the whole figure. Last June Segal arrived in Rome at Stamperia 2RC with one of these fragments. He had previously done several screen prints, but these were essentially replicas close to his brightly colored pastels he had been making for a few years. Indeed, the sculptor repeated that he had never been interested in the reproductive process itself until he visited 2RC and realized that printing would provide the means to harmonize the different aspects of his work pursued independently, realizing sculptures from casts of the human body and figurative drawings in bright colors.

A complex, time-consuming process ensued, which in a sense paralleled the original sculptural process. From the plaster mural fragment a negative bronze matrix was melted onto which strips of wet paper were pressed, and pressed under the press. When these dried, they produced a relief that conveyed the original anatomical information, but projected the tactile properties of the paper, thus invoking the kind of existential paradox that Segal seems to enjoy.

The creation of the eleven etchings further involved Segal in the techniques of printing, allowing him considerable possibilities to control the expressive movements of the bodies that rolled or were pressed against the copper plates. The artist believes that, by changing the means of expression, the greatest benefits should be taken from the new characteristics and potential. In soft wax engraving, the paper or fabric is pressed against a highly absorbent background, the texture registration can be quite noticeable. In these prints, the bodies of the "models" (all the workers in the studio) were smeared with grease and the prints of the cotton shirts, blue jeans, skin and hair were fixed as they came into contact. with the bottom. Furthermore, unforeseen shapes appeared when the underlying anatomy became evident in relation to the timing of the pose and the twist of the body. The engraving process also allowed Segal to keep some representative forms and to cancel or modify others. From the decisions derive conflicting testimonies: while some models are accurately, almost photographically, accurate, others are so distorted that the original identity transforms as another formal witness speaks.

The consequent "relocation" of fragments, like much of Segal's sculptural work, abounds with physical and psychic ambiguities.

Certainly one of the most striking features of these engravings is the degree to which they proclaim that spatial tension that Segal has constantly sought. For this purpose, the function of color is decisive. Intense, and sometimes harsh solferino, orange, animate the slightly threatening forms that stretch forward, while the generous and resonant blacks envelop, define and hide them, suggesting a dense and limitless space that can induce the observer to meditate on what it does not see but which, anxiously, perceives.

"DCome on, George, ”I said with a half smile, sitting in their living room in New Jersey. He turned to Helen, who was already leafing through her diary. She looked up and said, "Well, it's either before Zurich or after Israel."

With these words began the Blue jeans series. It had taken more than two years of persuasion, reassurance and harassment to convince him to agree to come to the Rossi's studio in Rome.

They arrived quite tired from Tel Aviv and went straight to the studio. Their daughter Rina, a little tired from the journey, went up to the Rossi's apartment.

George wanted to inspect the preparatory work that had been done on the bas-relief of the Female Nude. He had sent us a plaster cast from Zurich and a bronze matrix was cast while he was in Israel. He was pleased with the results. While in Israel, where they had just inaugurated his sculpture, "The sacrifice of Isaac of Abraham," he had experimented with body prints, using the stomach painted with the tuche of a sculptor friend on a lithographic stone. The results were interesting, but not so successful. He had ground the idea over and over in his head and talked to Valter Rossi, the master printer, about it.

The next morning Valter rushed to the printing office and said that in the middle of the night he had come up with the technique to use, that is, copper plates prepared with soft wax on which to press the models, fully dressed. The copper plates were immediately prepared, the models pressed against them, and that morning the first black and white proofs were pulled.

The results were incredibly beautiful and evocative. The tremendous strength of the human body was captured in two-dimensional images.

George kept the blue jeans theme and black background as a constant and experimented with the colors of the shirts. Eleonora Rossi, who is an expert color mixer and has what I would call a "chromatic eye", worked closely with George, under Helen's watchful eye. Nodding, approving or negatively, he was always present as one of George's most severe critics. The interaction between printer and artist was quite evident.

The Reds and George worked at a feverish pace, as if they were "cooking something". All that week they pulled out the proofs and worked on the colors.

A fortuitous airline strike, which George suspected I had planned, kept them in Rome two more days, leaving just enough time to finish the proofreading and sign the print slip. The work with the plates and proofs was now completed and George, Helen and Rina returned to New York.

It was interesting to observe the reaction that George had in Rome, his people dressed mostly in blue jeans, the blush of the walls and the political posters. Everything has had its effect. It was as if he were a little tipsy, like with good wine, after drinking the delights and visual stimuli of the fascinating, chaotic, seductive city that is Rome.

These prints are Segal's document of that period in Rome, and as written in the introduction to the Murals from the Han to Tang Dynasty, Beijing, 1974: "A given culture is the ... reflection of the politics and economics of a given society . "

I thank Barbara Rose for the transcript of her interview filmed with Segal, which appears among the citations throughout the catalog; Jan van der Marck and Harry N. Abramas, editors, for permission to quote their book, George Segal; Daniel Budnick, who gave us the photographs he took of Segal who works in the studio; Diane Kelder for her introduction to the catalog; Carrol Janis for his collaboration; and Lois Roth for her support.