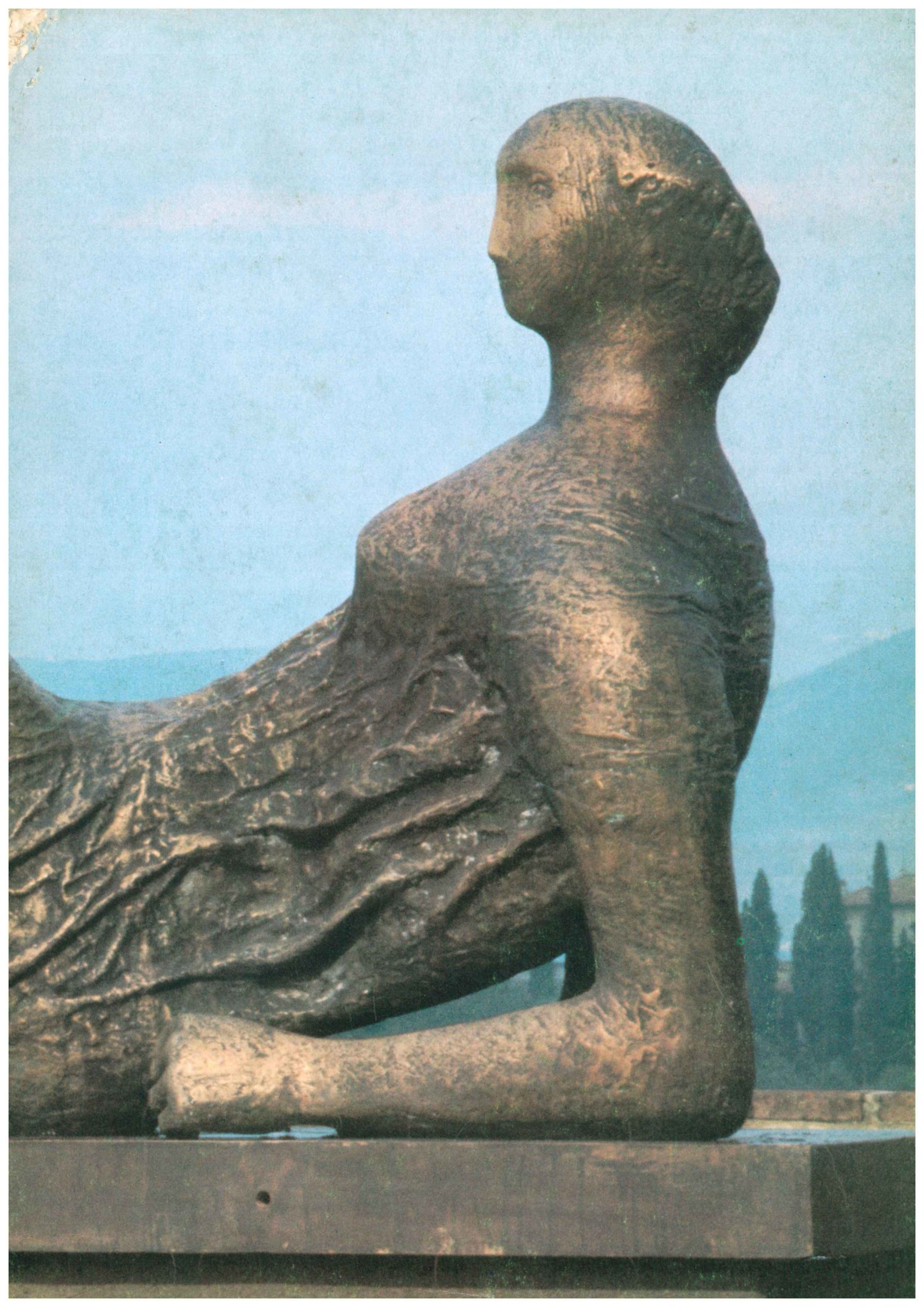 Note by Henry Moore on his sculpture and the human body

Almost all my work, both sculptural and drawn, is based on my fundamental interest in the human body.

It is no wonder that all my work is based on my predilection and study of the human body, which, in my opinion, is the basis of all sculptural work. It is from the human body, from our bodies, that the sense of shape and structure, weight and size come. We cannot help but put everything in relation to our body.

From the first moments, we learn from the mother's breast what is round and soft. From our knees and elbows we learn what is hard. We acquire a sense of measure and dimension from the fact that the average person ranges from one meter-sixty to one meter-eighty. We relate the big and the small with our measure. We capture human emotions and feelings by observing others and understanding facial and bodily expression. We understand, in fact, from people's bearing, their anxiety, their mental tension or their calmness, etc.

All these human emotions can be expressed in sculpture through form and structure.

Moore is a classicist, who while living the drama of his own century, evokes in both memory and imagination the kingdoms of Saturn, the epoch of origins and great mutations. He is a statuary sculptor, considering statues perfect, only when they assume the nature and essentiality of the sacred image, not as something created, but as having existed always, in places whose magic and cosmic qualities make them reveal themselves.

They are large solemn figures, erect or supine like the dolmen and menhir of prehistoric times. The small bronzes too, so often inspired by tribal maternity cults, are anthropomorphic symbols of mythical places, votive offerings left in primitive sanctuaries by tribes which have come to celebrate a moment of intimate union with nature.

The statue does not necessarily copy the apparent, but always retains the essence of the human form, and it is this figure, this form, which achieves the perfect equilibrium between its own singularity as object, and the universality of the cosmos. The living form becomes a figure, just as the indistinct form becomes nature. Moore's conception of space is not one of geometrical entity, but an experience that is lived: distant yet near, a horizon but imminent, a vision and a contact. It has different qualities of what is solid and what is atmospheric, qualities of light and half light. The statue is a centrical nucleus; the void complementary to its masses is a visible landscape. Its reliefs are like mountains, its depressions valleys, its outlines horizons. Moore's mythology lies in this primary and eternal relationship between nature and mankind:

Every mythology demands a rituality. The statue-images are more the instruments than the objects of the cult. Their rounded modulated forms, sometimes polished and mirror like, unite with large luminous spaces, but the surfaces bear the signs of physical contact with man. Foremost among those faithful to the sacred image, the artist himself cannot avoid touching, caressing and polishing it, or suddenly, as if irritated by the image's indifference, hitting it, chipping and scratching it. Many of Moore's graphics are a complement to his sculptures and already constitute an interpretation and a comment, attempting to reduce them, and place them in a human dimension.

As a draftsman, Moore does not plan sculptures, but he collects together an extraordinary quantity of material to feed his three-dimensional imagination. He has filled many tens of exercise books with chiaroscuro and coloured drawings. They are figures in an embryonic state, or cells which one tests for their vitality in coloured atmospheres of greater or lesser intensity. The same marks that could be seen on the surface of the sculptures can be found again in the drawings: evidently, sculpture and graphics are all part of the same creative and technical cycle. In fact for this reason, Moore, through his graphics, searches for an intimate and deep relationship with his sculpture, by trying to recreate the porosity of travertine, the variegated stains and sugar-like transparency of marble, the unavoidable impurities in the fusion of bronze, the grain in wood. Drawing therefore is also an expansion and extension of matter in space. Moore wrote, « People think that a sculptor's drawings are diagrammatic studies without any feeling for a background to the object, or the atmosphere around it ... on the contrary, the problem of space is as important for the sculptor as it is for the painter. It is the problem of a totality which exists only in a unitary vision of form and surrounding.

The real graphic work of Moore is a necessary link between drawing and sculpture because the mark is more strictly linked to the action of the hand and the tool on a material, and also because the pressure of the printing press accentuates the density and transparency of the coloured atmospheres. But there is a new element: the large aquatints which surprisingly call to mind Bartolozzi's « mezzotints >, preserve and augment the statuary dimension to the point where they must be considered real statues, though not three-dimensional. There is not the projectional reduction of bas-reliefs: the graphic impression entirely preserves the nature of the form in the round. The white parts of the figures rise, spread and dissolve in the spaciousness of the backgrounds which come closer and become heavier and more embracing. The background to the statue, no longer complementary, has the same substance, and in his life size drawings, Moore, now in his eighties, has finally realised his most hidden and deepest intent in his research into sculpture, which is to express in synthesis the limit of the human form and that of the natural horizon.