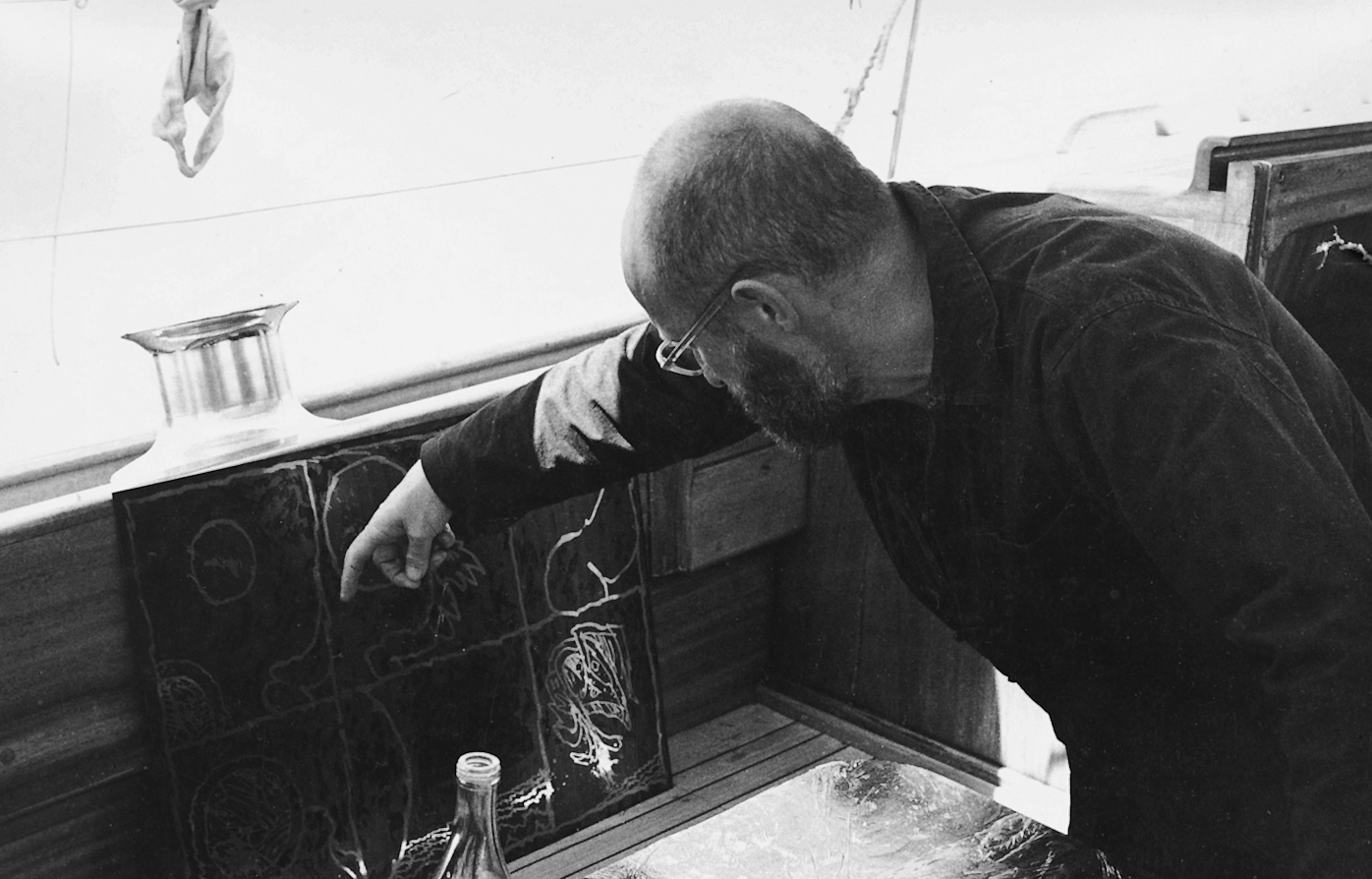 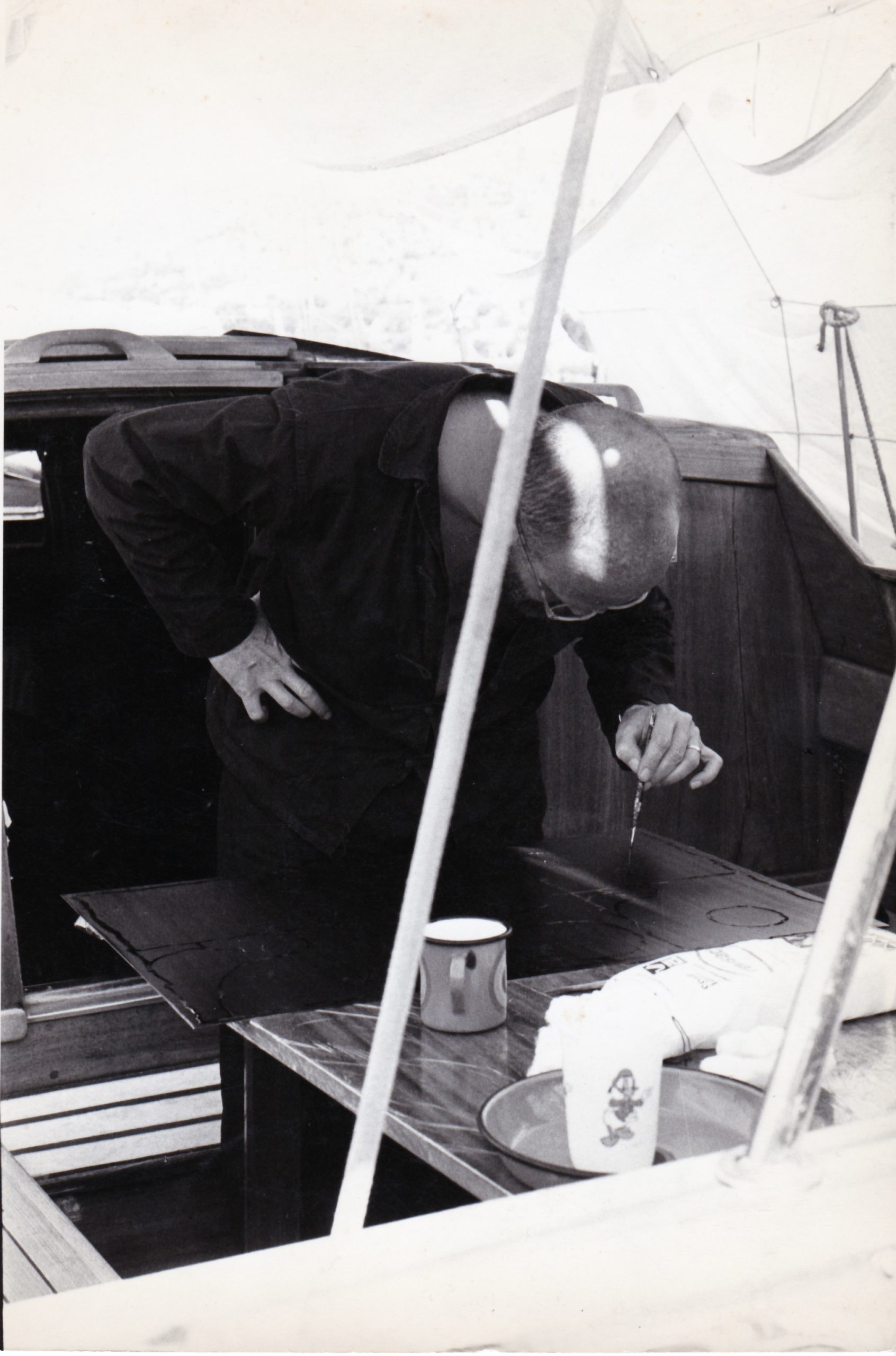 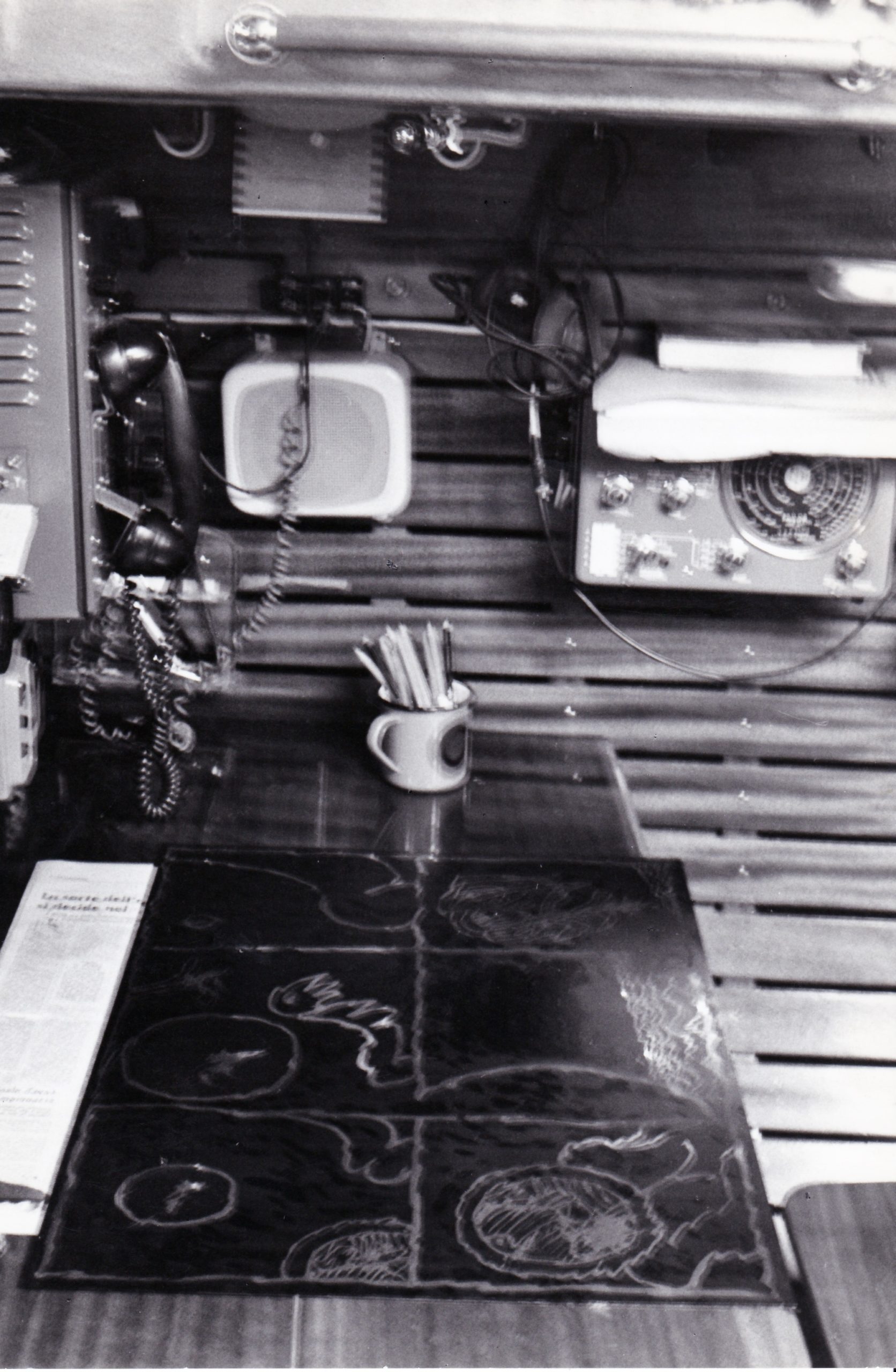 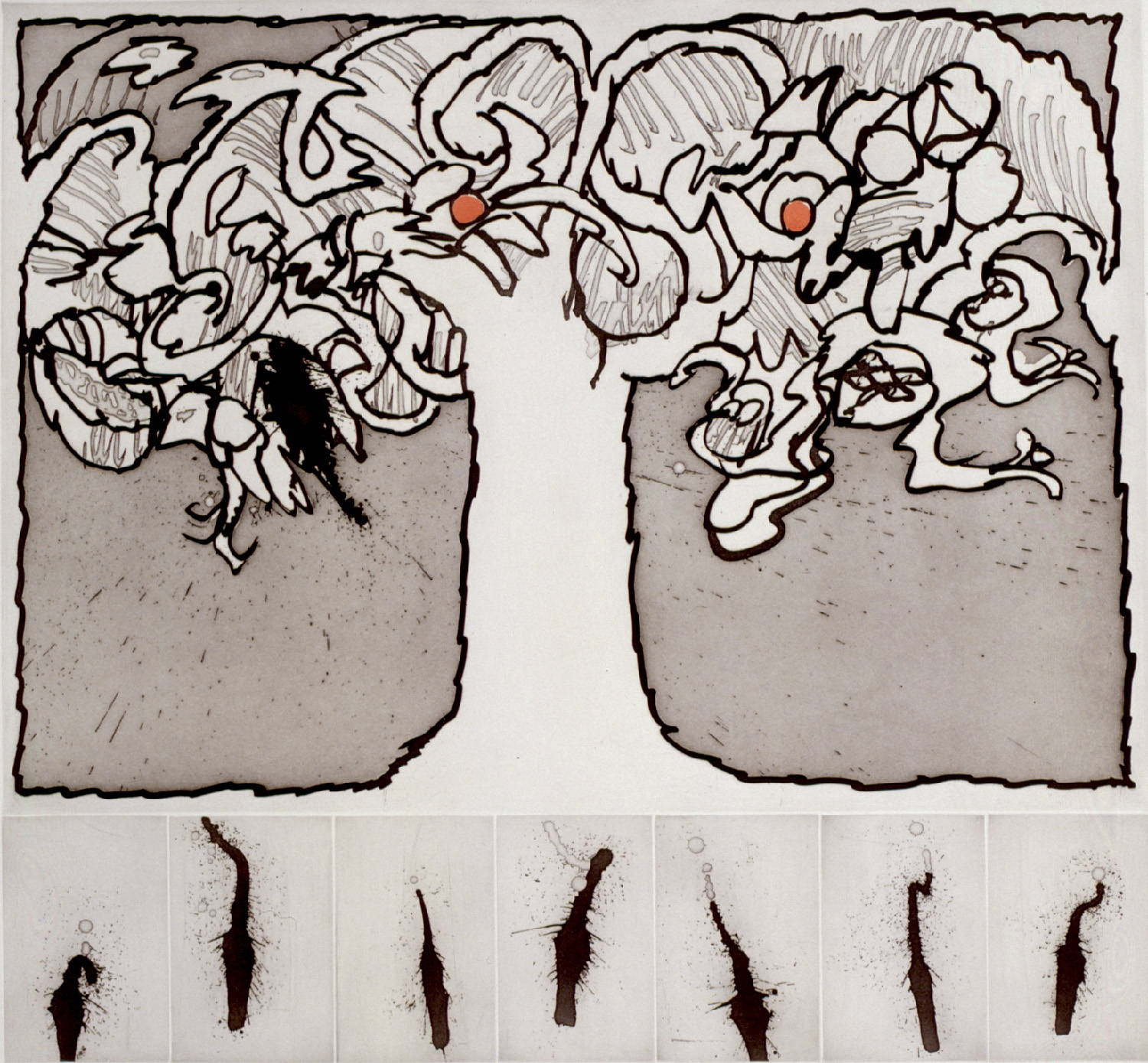 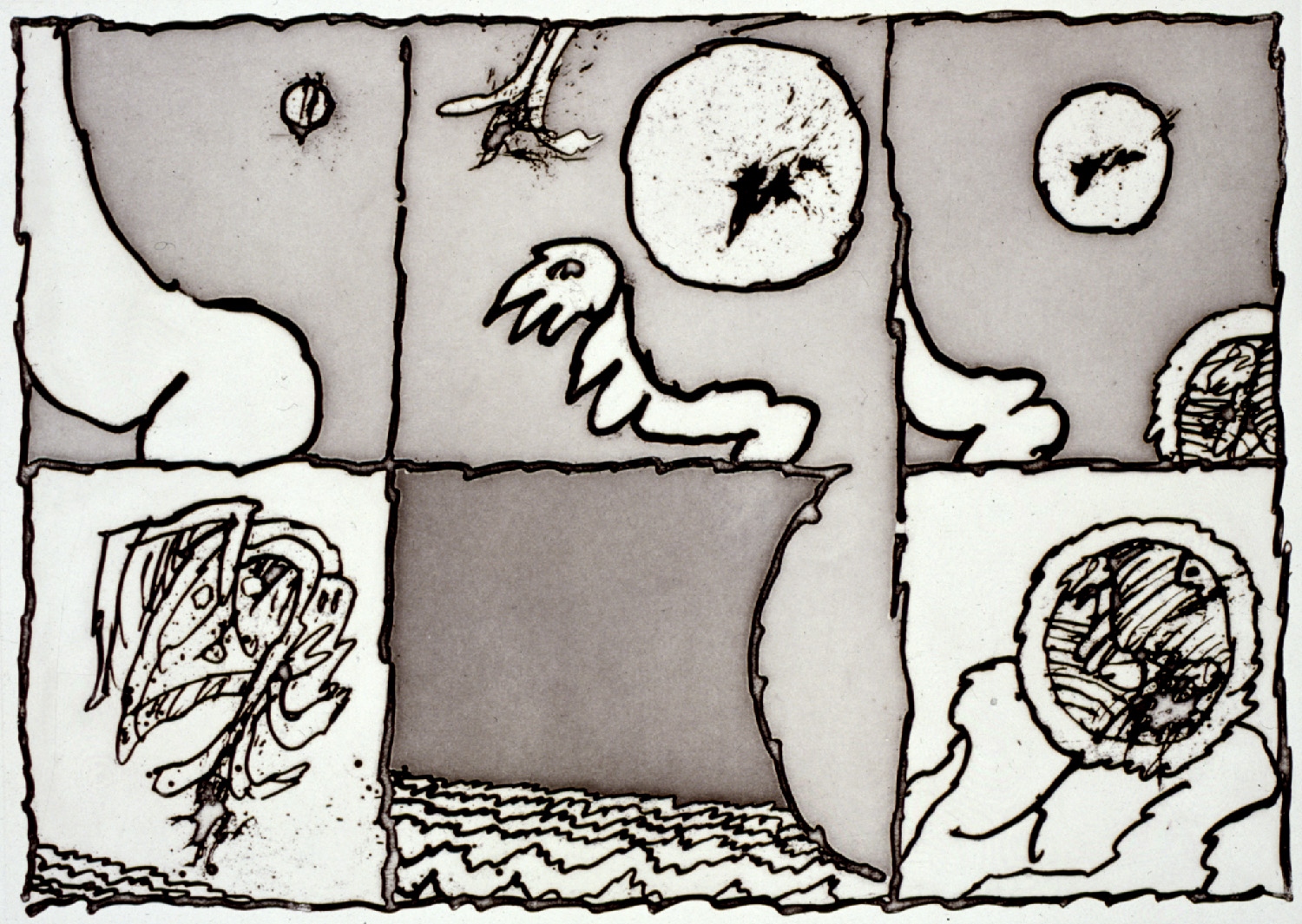 Text by Valter Rossi from Life is a sign

They made us moor under the Castle, between a warship and a strange boat with the Dutch flag, moored near a Canadian sail. Then only a few small fishing boats remained, for tourists, with large Turkish flags.

By now we got used to undergoing the usual questions: “where do you come from? what flag is that…? ”. Then, a lady, with a fluid French, a sun-struck face, very expressive, asked me if we were from Rome and with my assent she said “So you are Ives Rivieres's friends?”. "Sure!" I replied. At that point he introduced himself: “I'm Miki Alechinsky, we didn't think you'd ever come to Bodrum. For us, arriving by car was a real problem, but the place is so beautiful and different that it deserves all the hardships and troubles suffered ”.

After two hours, on the SIDA, there were eleven people: Pierre, with a hat like a foreign legion to prevent the sun from destroying him, was immediately amicably available. Ives had certainly informed him of my intentions to meet him, but he did not imagine that I had brought all the equipment necessary to make some engravings on the boat.

In addition to Pierre and Miki, there were Nicolas their son, Ives Riviere and his wife Niki, Jean Clerté assistant and printer of Pierrre with his daughter. Everyone was housed in a small hotel on the harbor, decent for that time, very suitable for Pierre because his room opened directly onto a huge terrace overlooking the harbor. This was his studio where he could work.

The atmosphere from that location was fantastic. The castle opposite, although large, ended up being like a passer-by in a colorful crowd.

The history of Halicarnassus had left no visible traces but was all present for the spectacle of the surrounding nature, immersed in a clear and intense light that made us grasp details and details usually out of focus.

Such a vast composition is still in my memory. Even outlines of mountains at incredible distances approached, with their silhouettes, like wings upon wings with an unimaginable range of colors. On the other side, the islands in succession left little room for the sea because you felt that other islands were ready to appear.

In the following days we drove to visit Didima, Miletus, and Ephesus.

Our little caravan moved around those ancient areas, urged in all of us by old loves and student memories awakened as our eyes rested on this or that settlement.

For the first time, with Eleonora, we realized that, even if the Romans had succeeded in destroying the beauty to establish their urban model, in those sites, in the lethargy of the centuries, only the joy of Greek beauty, because Roman architecture, having lost the function for which it was born, remained a metaphysical appearance.

The way of reading of the French friends, on the other hand, was detached, with less emotion, as if they were still undergoing Roman domination. We faced critical roles objectively, aware that Greek beauty, for the Roman invader, had to give way to their domination.

A large number of works came to life on that terrace, which Pierre created immediately after each visit, between sea and mountains and such different civilizations. He was thrilled with the countless ideas he could capture. His only concern was to have enough paper with him to satisfy his hunger for paint.

Pierre knew that we had brought some copper plates to the SIDA and that, if we wanted to, we could make some engravings. He began to talk about it the day we decided to go to Knidos, a peninsula full of antiquities, accessible in those days only from the sea.

The first difficulty, arriving in the small bay, was that the military prevented us from landing with the tender. You could only go ashore by swimming and for a very short time.

Here Pierre's fibrillations began to surface because it was the first time he had such a drastic and intimidating contact, right there, where a man of culture like him had the right to be received with respect and with the utmost generosity. All this, those armed soldiers, were certainly not able to understand.

I had heard from Danny Berger, who at that time was collaborating with us to open the gallery in Rome, that the excavations in Knidos were directed by a friend of his, Iris Cornelia Love, an American archaeologist who had worked there for some years for Long Island University.

The first thing I did, landing swimming in the bay was to look for Iris, who had already noticed the Italian flag waving on the SIDA from the ground and was waiting to meet us.

She was a passionate lover of our country. When I called her by name, she hugged me affectionately and there I knew that Danny had warned her of our probable visit.

The cult of Aphrodite in that peninsula had been the reason for that settlement and that was the research they had set out to carry out with that excavation. Iris had begun the excavations, as early as 1967, with some young American researchers, helped by about fifty local Turkish workers who worked with great enthusiasm on this initiative.

At sunset we had to swim back to the boat where we hosted Iris and, in rotation, some of her collaborators for dinner. With the imagination fueled by the various discoveries that took place daily, one came to imagine how much the Greek period, on that site, had left a legacy. Pierre was interested more by the stories he heard than by the findings.

In that bay, one morning, Pierre asked me to face the copper plates, he felt ready and charged. Thus were born, on the SIDA, the two engravings: "Mare nostrum" ( Feticcio 316,) and "Arbre de vie" (Feticcio 227,), astounding all of us, including Iris. A cognitive synthesis, in that space saturated with history, recovered in the reading "Cobra".

The color, in that part of the Mediterranean, is so exasperated by the sun that it is reduced to black and white; in one of the two engravings there was only a very small note of red, a presence, which enhanced the light-saturated value of the “Phicus” engraved on the copper. The large slab was supported by seven small metopes which contained as many roots engraved.