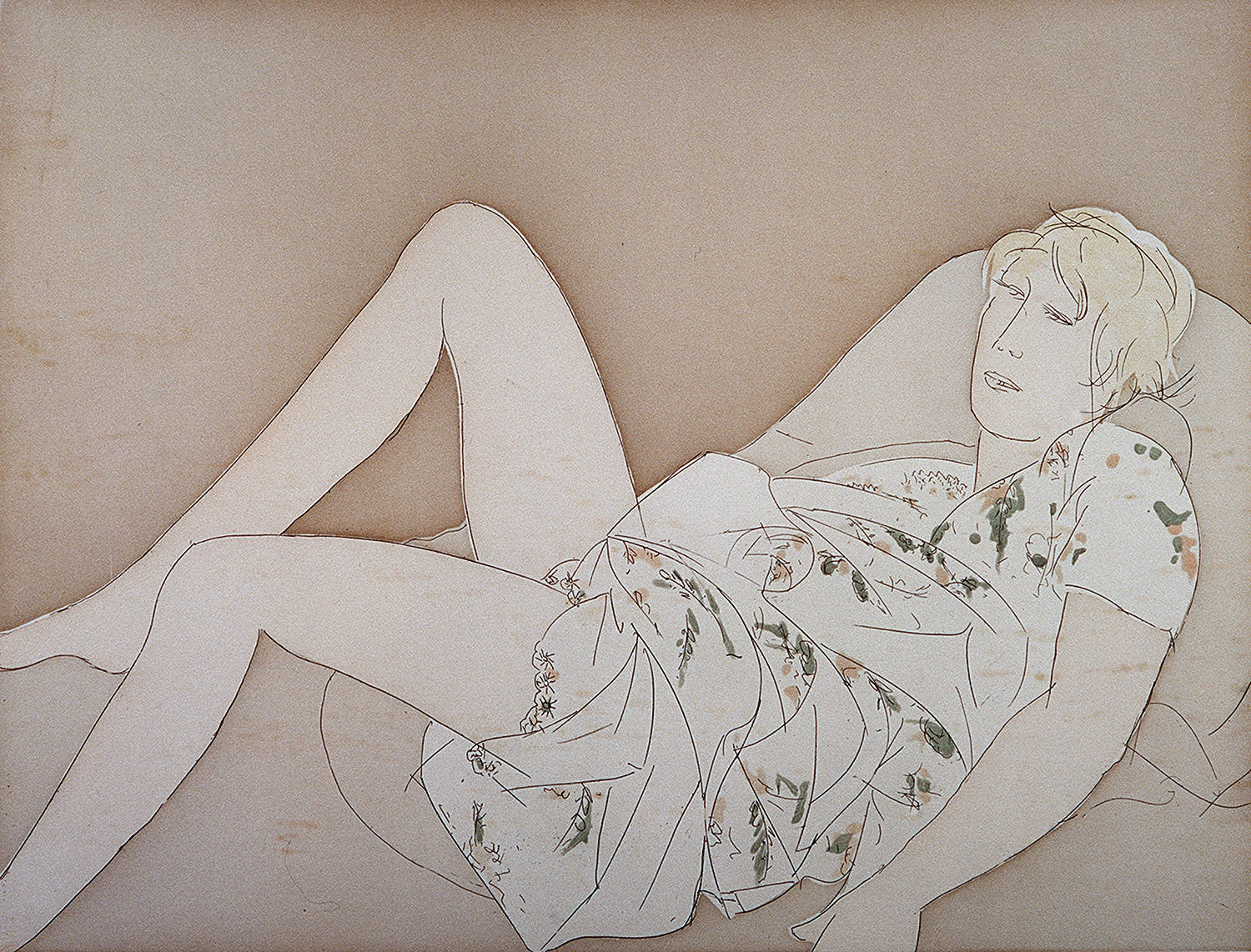 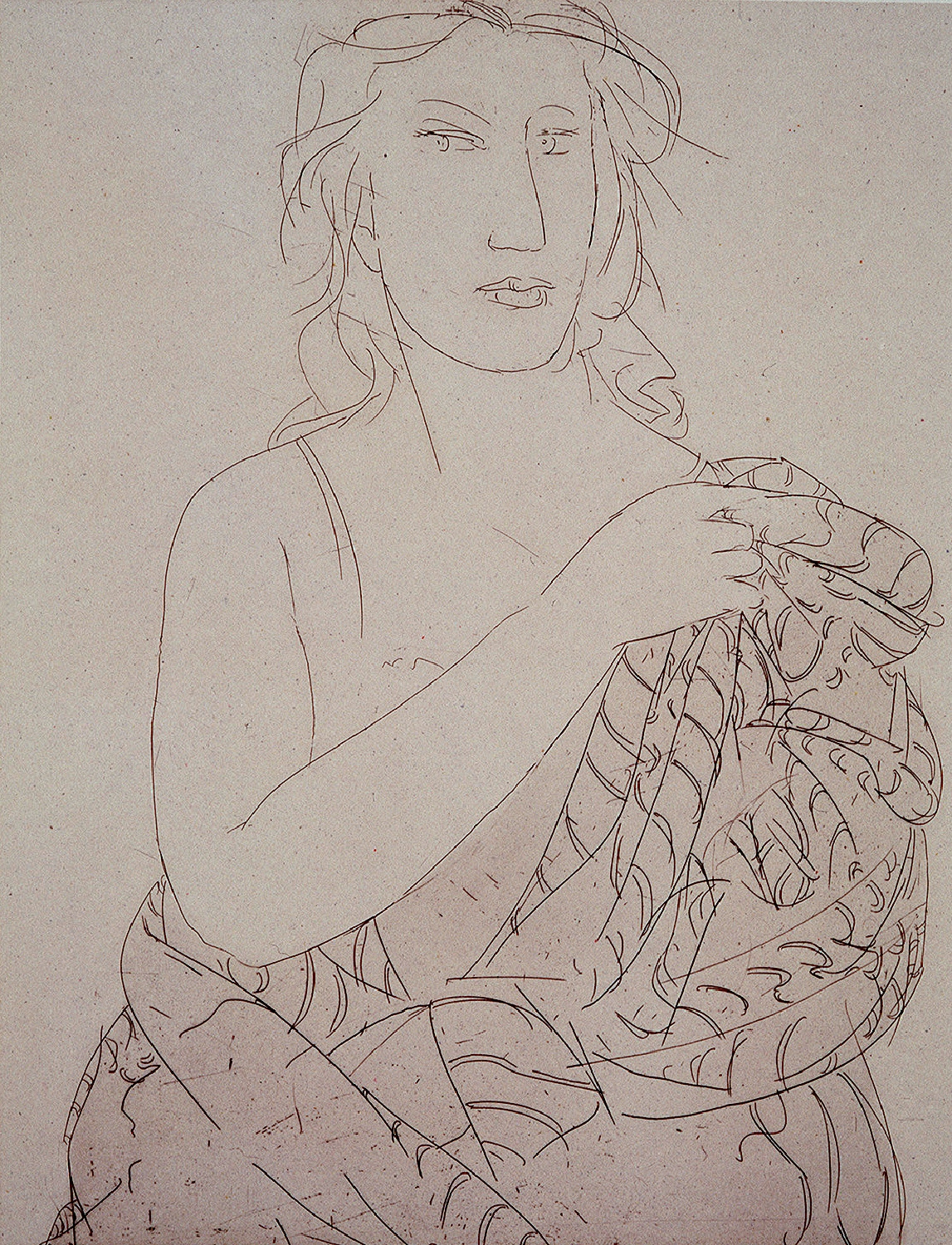 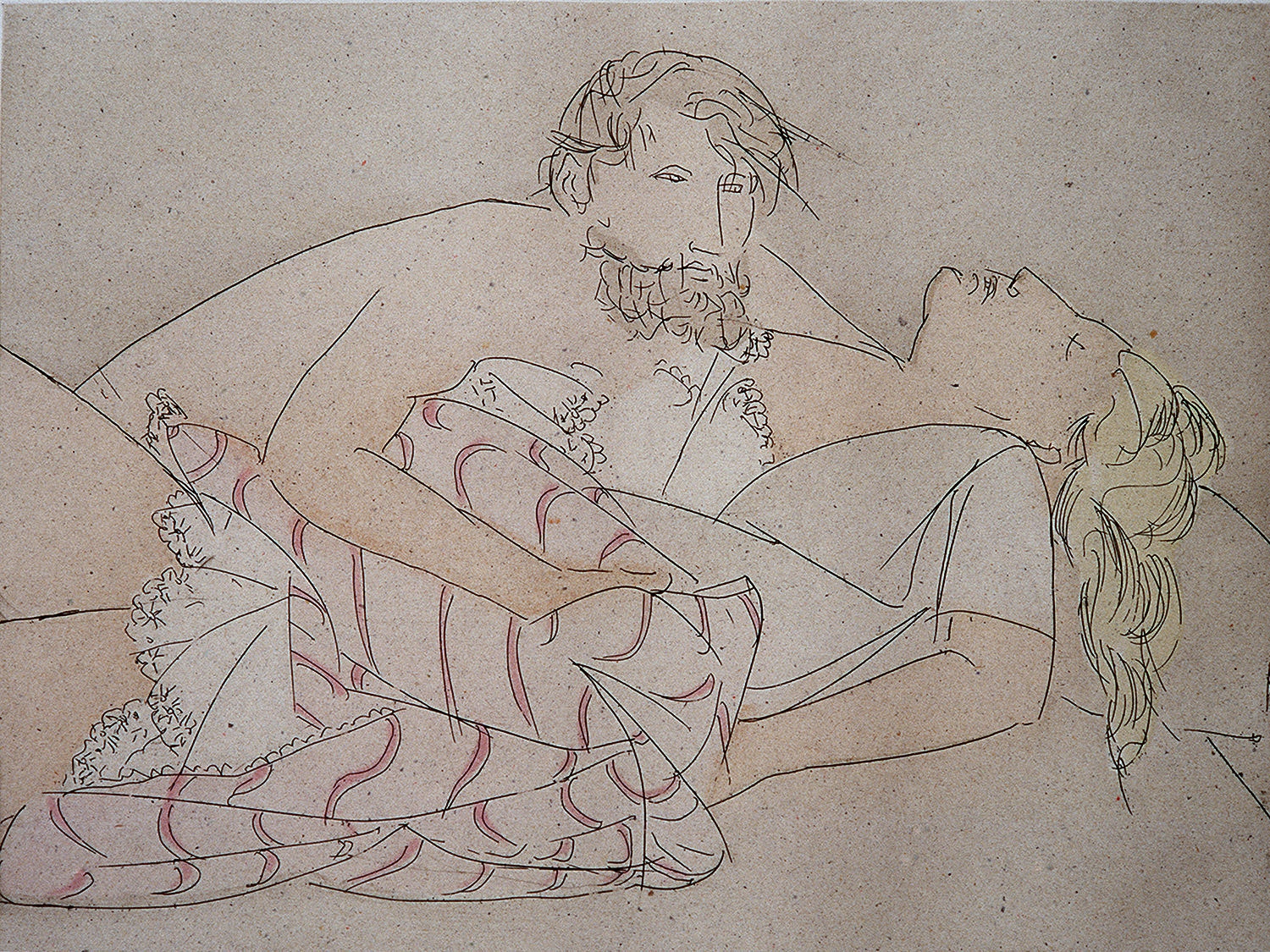 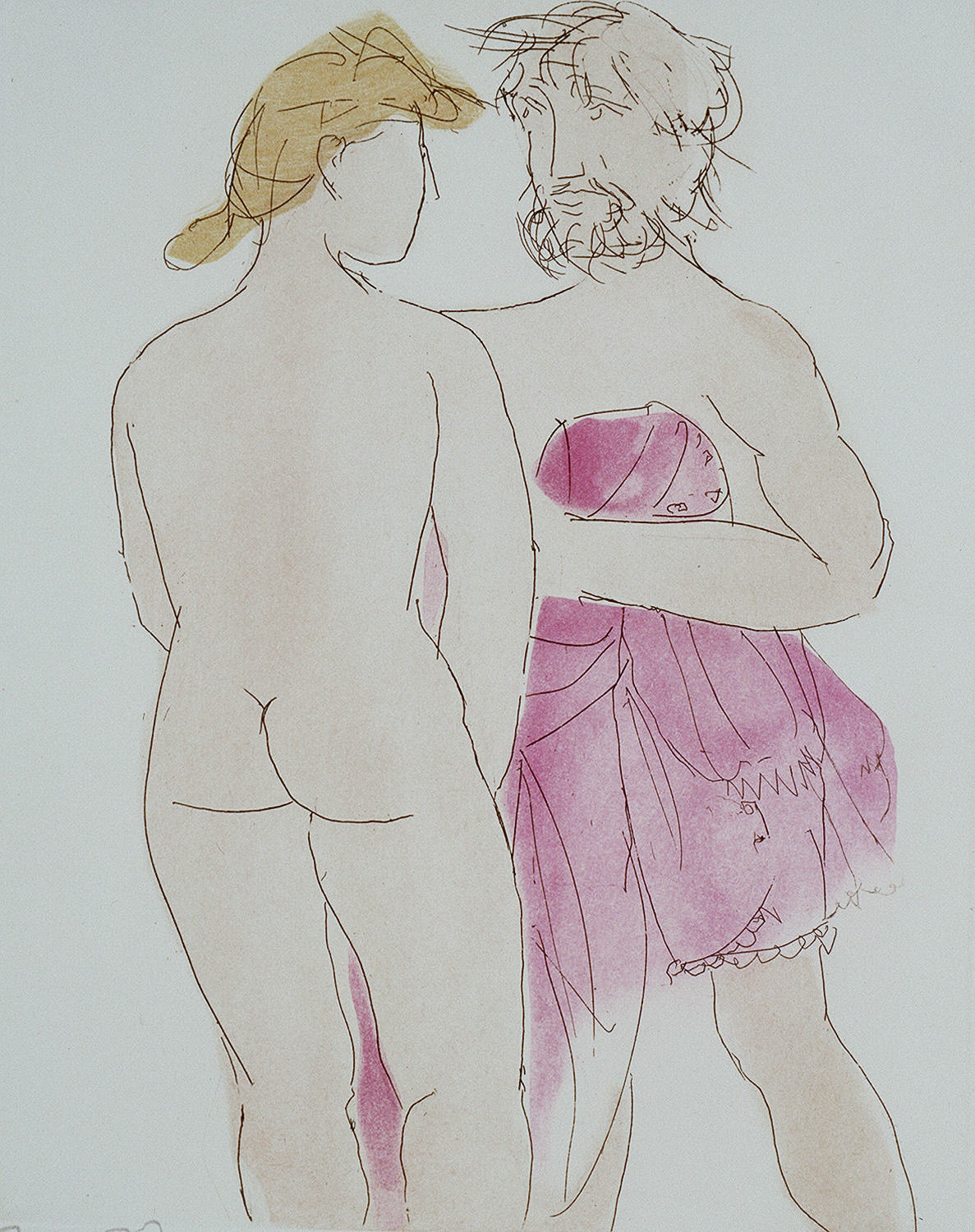 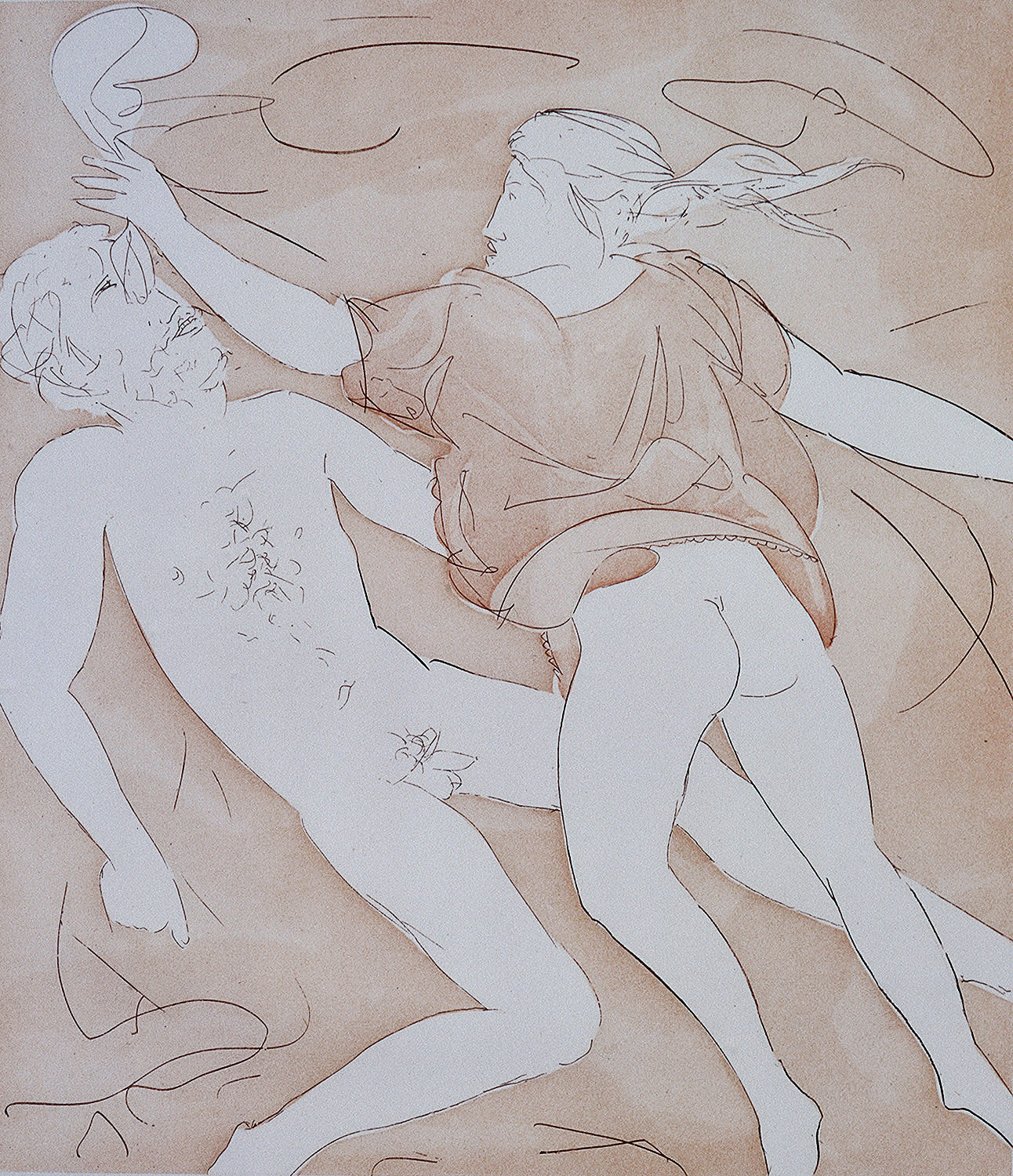 Drawing has always been a prime moment of Manzù's activity and therefore, indirectly, so has etching; there is no profound difference for him between the two, as we shall later see. For that matter, sculptors have always been amongst the masters of drawing from Michelangelo and Bernini to Rodin and Giacometti. It is not mere chance that drawing is the visualization of the form, and to visualize the form is to understand it fully in its very structure, its volume, its rhythm. The sculptor's drawing therefore, is eminently constructive but it is also an irreplaceable means of filtering and decanting the more emotive components of the form which often are one and the same as substance or matter. One therefore, sees in the drawing, how form lives in the spirit first, and then in space which is embodied by matter. On the other hand, this «life of the form in the spirit» is not exclusively abstract. We recall Focillon: «L 'idée de l'artiste est forme, et sa vie effective prende le même tour». This same process is very intense in Manzù who has always thought, day-dreamed, remembered, rejoiced, suffered and contested, - in short, has lived - for forms, precise forms, not images. In fact, I believe that this constant loyalty to few images, iterated throughout these many years, be the very proof of how this great champion of the «figurative» is precisely, a master of form, or better yet, a master of the «life of the form», as meant in the overall extension and complete sense of the word.

Well, this process is very intense in Manzù who has always thought, fantasized, remembered, enjoyed, suffered, challenged, in a word lived, by forms. Precise forms, not images. In fact, I believe that the constant fidelity to a few images, iterated for years and years, is proof of how this great champion of figurativeness is precisely a master of forms, better a master of the "life of forms", understood in all its complex extension. If the artistic vocation was very precocious in Manzù as well as unstoppable, so was the conquest of a style, of an autonomous language. We will not return here to what was written in a masterly and exhaustive way on the importance that Maillol, Medardo Rosso and Rodin had on the artist just twenty years old, we will list the external convergences that converged to form and mature him. Suffice it to say that his prehistory, which goes from around 1929 to 1936, although so promising and anxious in the "natural bud of life" and in which the most specific qualities were all potentially active, demonstrates how much trembling, obstinacy and effort Manzù he sought not himself but the style of himself, as he seeks a second finer and more sensitive skin to adhere to that thick and warm temperament, of instincts. Style that for him could never have been born through exclusively intellectual or lexical research and experimentation but precisely from that varied exchange, from that incessant transfer between art and life, better between the life of forms and forms of life. Manzù was not born a "virtuoso" and for this reason he never became nor could he ever become a mannerist, continuing today as yesterday, albeit now with the razor-sharp tools of a portentous craft, of a technique that has itself become a creative activity, to doubt, to to seek each other, to find each other. And here is the "praise of the hand" of Manzù, a faithful ally of his daily creative labor, seismographic capturer of the idea of ​​form and executor at the same time wise and lightning-fast. Proof of this firm alliance can be found in the artist's recent drawings, defined by Brandi as "a surprise" due to "unparalleled finiteness, but not at all academic, and an impetuousness of sign that detaches the image from the paper". Well it seems to me that the same surprise is repeated now for these very recent engravings.

It is above all the clear will of the form, so direct, fresh and yet firm, reasoned, that constitutes the captivating charm of these sheets. Out of the uncertainties and whims of the etchings, everything is resolved in the sign, graduated and modulated by the support force of the hand. Now short, aggressive, cutting, now flowing, caressing, light. Accurate in accusing volumes with constant mastery, boldly dynamic when the urgency of saying is more impetuous, feverish. In general there is a tendency to synthesis, to the dazzling compendium, even when one indulges in detail: the ruffled frill of the petticoat, the small flowers of the soft dressing gown, the grains of the necklace, thus become as many perceptual accentuations rather than narrative indulgences. The same delicate color, close to the transparencies of the watercolor, has a simplicity, a lively scent like freshly cut grass. And it is precisely this color that brings us back to certain drawings by Rodin of young, "morning" bodies of women in motion stained in their hair or in their robes of red, brown, blue, pink. But while one feels that Rodin traces those attitudes almost without taking his eyes off the models, here every pose or gesture appears mentally retraced and relived, giving the image its own mental abstractness.

To engrave Manzù uses a soft tip, similar to a nib, and faces the plate with impetus, without correcting. He explicitly comments: "Little cooking, no oil, no butter, and when it doesn't work you start all over again". However, as also happens in sculpture, some rare unused lines remain, imprint of an energy, of an operative ardor.

The themes of these engravings are all well known. Manzù has always carried them with him, he can leave them but he never "dismisses them" completely. They were born with him, with his maturity as an artist. Here, for example, is «The painter and model», whose prototypes date back to 1935 and the «Lovers, I» also a recurring theme for years. In the two cases it is a question of the same formal problem, that of two close figures, and it is precisely the fusion of the bodies into a single structure, the interpenetration of the volumes, the tangle of the garments that interest Manzù in both cases but, on the other hand, the forms would not have this exciting poignancy in this shot if there were not the fuse of a deeply lived, enjoyed, suffered reality of feeling to load them. And here are the "portraits of Inge", sharp yet sweet images that Manzù could do with his eyes blindfolded so lovingly and firmly that he possesses them. The most beautiful (the "Bust of Inge, I" and the "Bust of Inge, II") are extremely essential. Manzù takes away, does not impoverish. The figure emerges solemn but not mythologized as a languid Elizabeth Siddal, even if wrapped like the heroine of the Pre-Raphaelites in copious robes; in this regard, see the difference in the draperies so modernly resolved, always "inhabited by the figure" as Leonardo wanted, never a cold copy of ancient models.

For a long time, Manzù's engraving work was little known because it consisted of one-offs or very limited editions, in fact the artist has always destroyed the plates. Exhibited for the first time in Venice in 58 at Bevilacqua La Masa with an essay by Giorgio Trentin and, then, in 64, at the Nuova Pesa in Rome and at the Drawings and Prints Department of the Institute of Art History of the University of Pisa with an illuminating presentation by Ragghianti (cataloged by Giorgio di Genova), has found a wider notoriety in recent decades and has been the subject of repeated exhibitions in Italy and abroad. But above all with the results of these splendid etchings and aquatints that it is even more closely linked to Manzù's design and plastic work: certainly less fruitful but no less intense expression of an identical creative fervor.