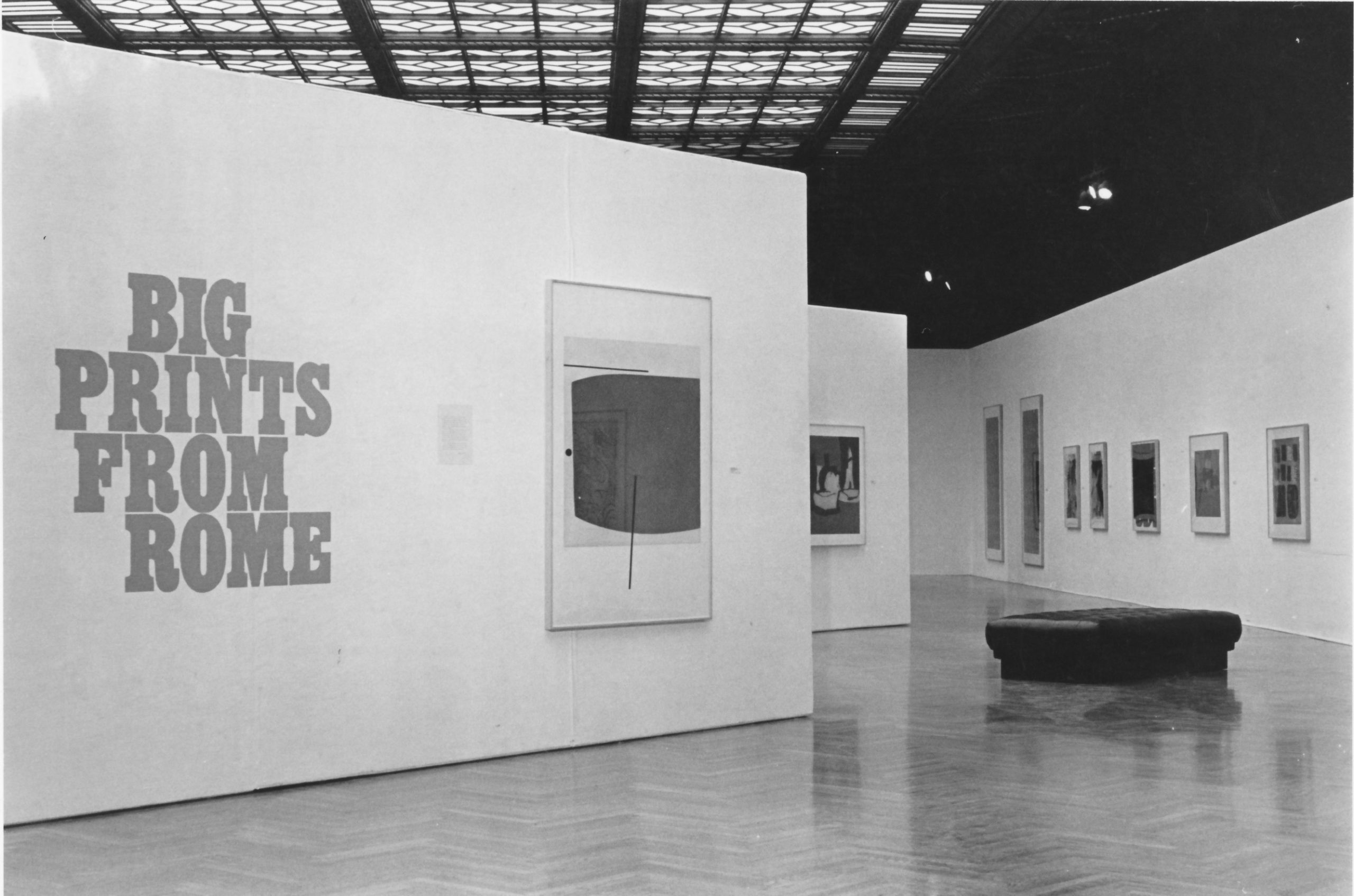 That contemporary printing is an international activity is not a new observation. But Western prints have historically been an international commodity since they first appeared in Europe on the verge of the XNUMXth century, with their inevitable spread as the most wearable of artists 'and culture-bearers' models.

While, as is to be expected, sculptors often approach printmaking largely in terms of the transportation of dimensionality, painters generally tend to extend their style in prints according to their own personal idiom. Thus the seemingly improvisational calligraphy of the COBRA painter, Pierre Alechinsky, continues motifs of his vivid gestural expressionism. In contrast to this aesthetic is the formal restraint of Piero Dorazio, one of the founders, together with Pietro Consagra, of the group, Forma Uno. Dorazio's newest works are printed on long, narrow sheets like streamers. Through their luminous levels of transparency, achieved by several applications of aqua int, the now overlapping, now separating bands of pure color move with an intriguing visual rhythm.

Giuseppe Santomaso, Afro, and Victor Pasmore work in the tradition of XNUMXlassical abstraction. The Venetian's plates are superbly elegant, the sensuousness of their serene field worked up by restrained, delicate passages of fine aquatint. This process was employed in the prints by Afro to articulate outlines of his abstract shapes; three bitings of aquatint were required for the darker accents. Rather than expanding the composition over the entire picture field, Pasmore evolves a more compressed image, its central component seemingly growing organically out of the enclosing element. In contrast, the American sculptor and painter, Alexander Liberman, has completely departed from his severe geometric style of the past decade, into painting. The bold slashes of color of the paintings are transposed in the prints into an equally vigorous personal and formal statement.

Some of Sam Francis' latest prints show him looking at the world as through a lattice, composed of various depths and definitions, interlacing with and segmentalizing the realm of his intensely hued myriad of membranous, floating forms. Francis made his first intaglios under the aegis of 2RC. It is not unlikely that the experience with the relief creating effects of these processes had some influence in directing him to his most recent work in the medium of monotype with or without embossing.

As these prints from the 2RC Workshop demonstrate, refreshing diversity, complex technical procedures and new aesthetic horizons are among the features contributing to their appeal. Their large presence challenges the domain of painting, their intaglio methods the sway of planographic processes. Whether focusing on a single element such as the gestural stroke, the spread of a large stained from, or the energizing of the surface in various ways, the multiformity of graphic invention and texture of these prints reflect the many faceted visual poetry of our time. The availability of such creative works to· all art lovers today is a fortunate circumstance, resulting not only from the artists' continuous exploration of the potentialities of the print, but as much from the existence of master printers to realize them.

Founded about eighteen years ago in Rome by Valter and Eleonora Rossi, the 2RC Workshop has been instrumental in furthering artists' use of intaglio techniques both in Europe and the United States. Although the present exhibition presents a selection of the work produced at 2RC, the accompanying catalogue is designed to provide documentation for the total output of the shop to date. In this way, the history of prints whose editions have long been exhausted is preserved, and a compendium of 2RC's accomplishments and contributions to the art of the contemporary print is made available as a tool for research and enjoyment.