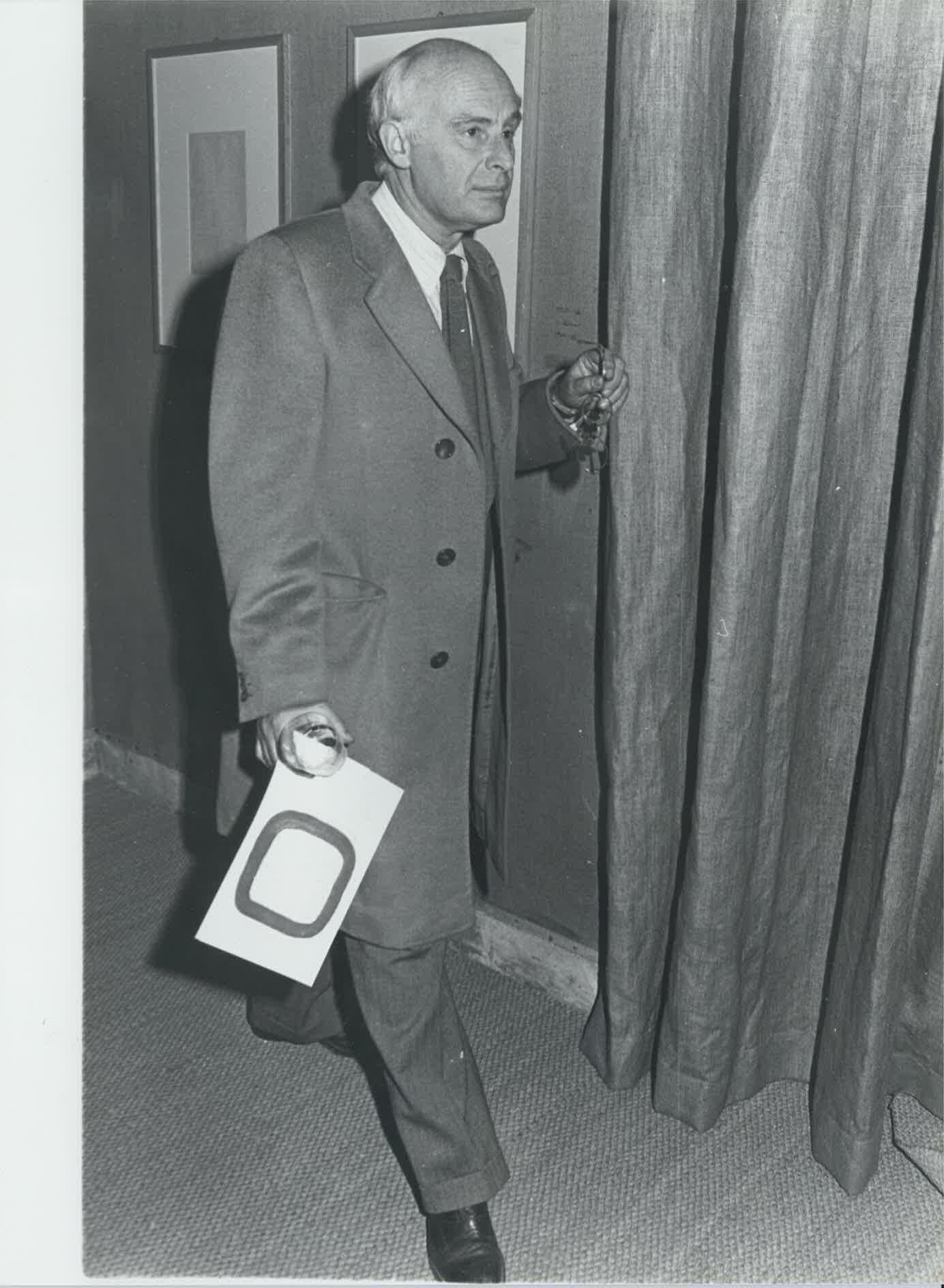 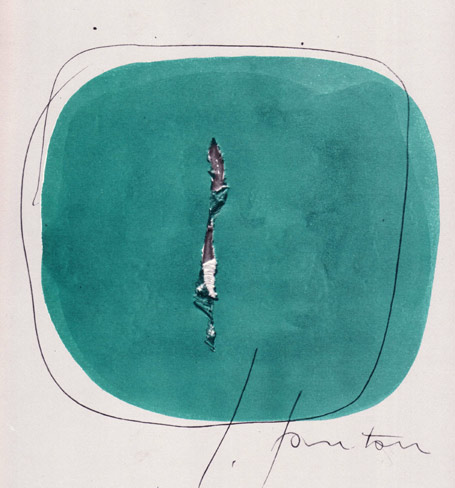 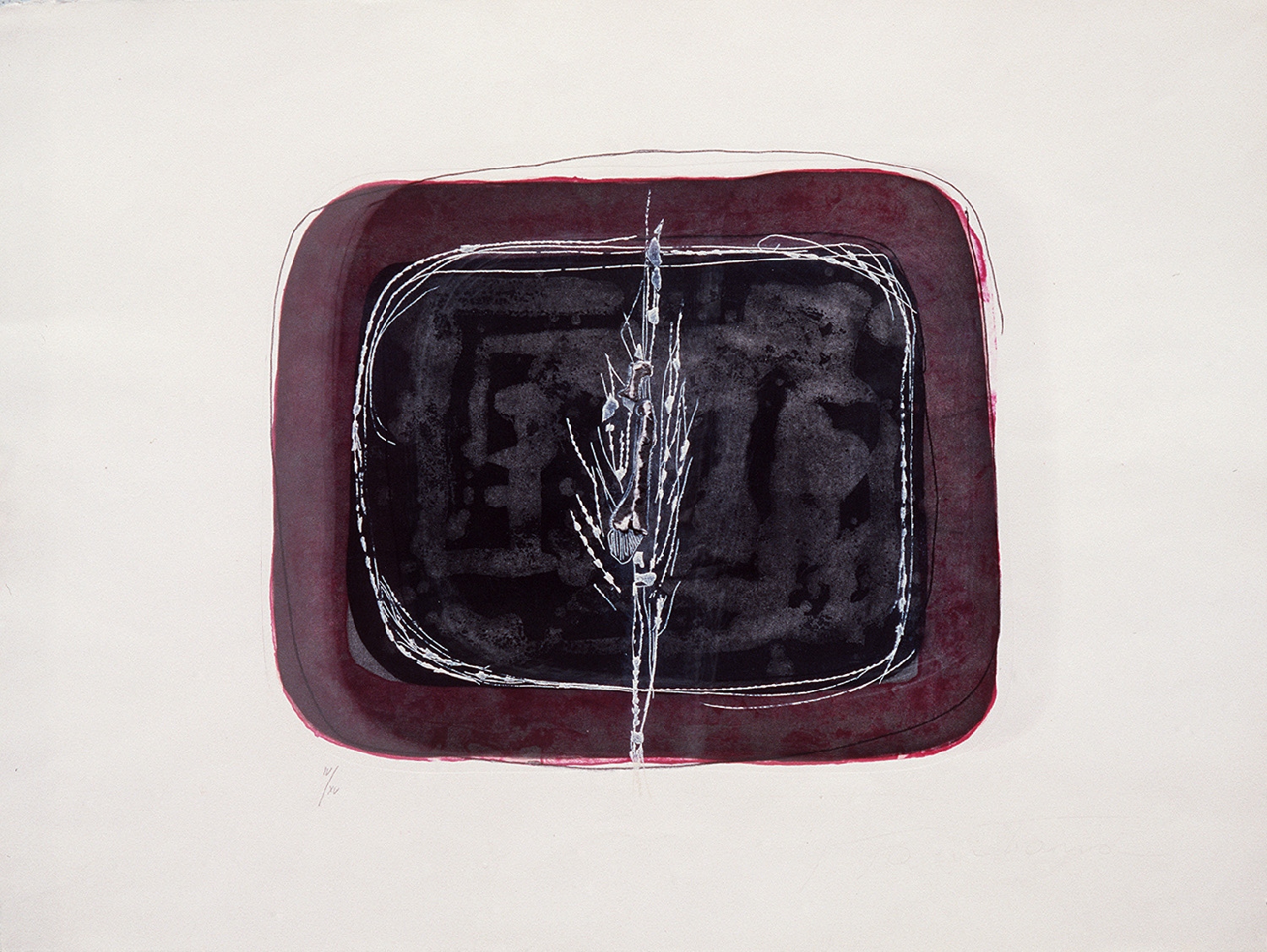 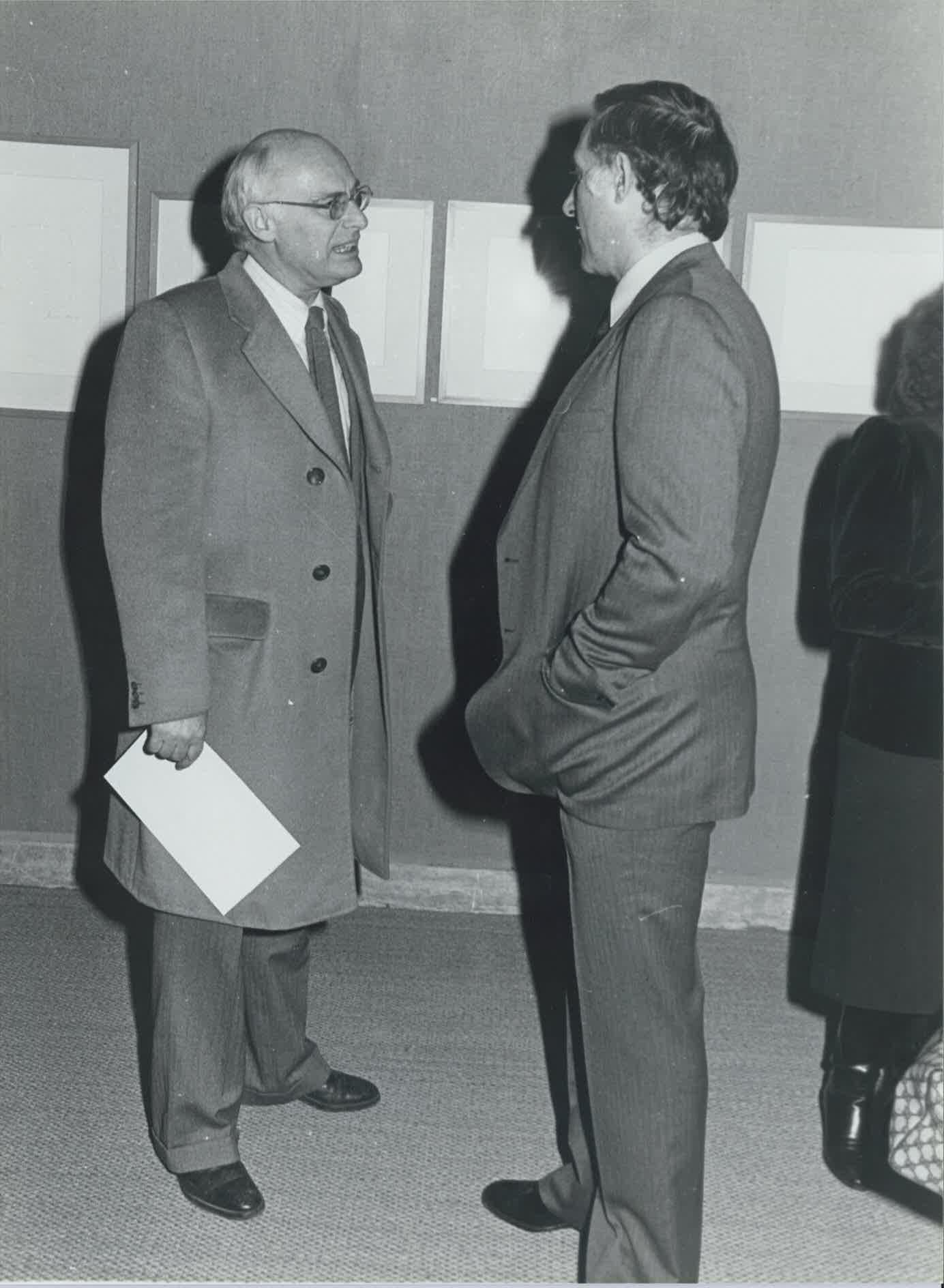 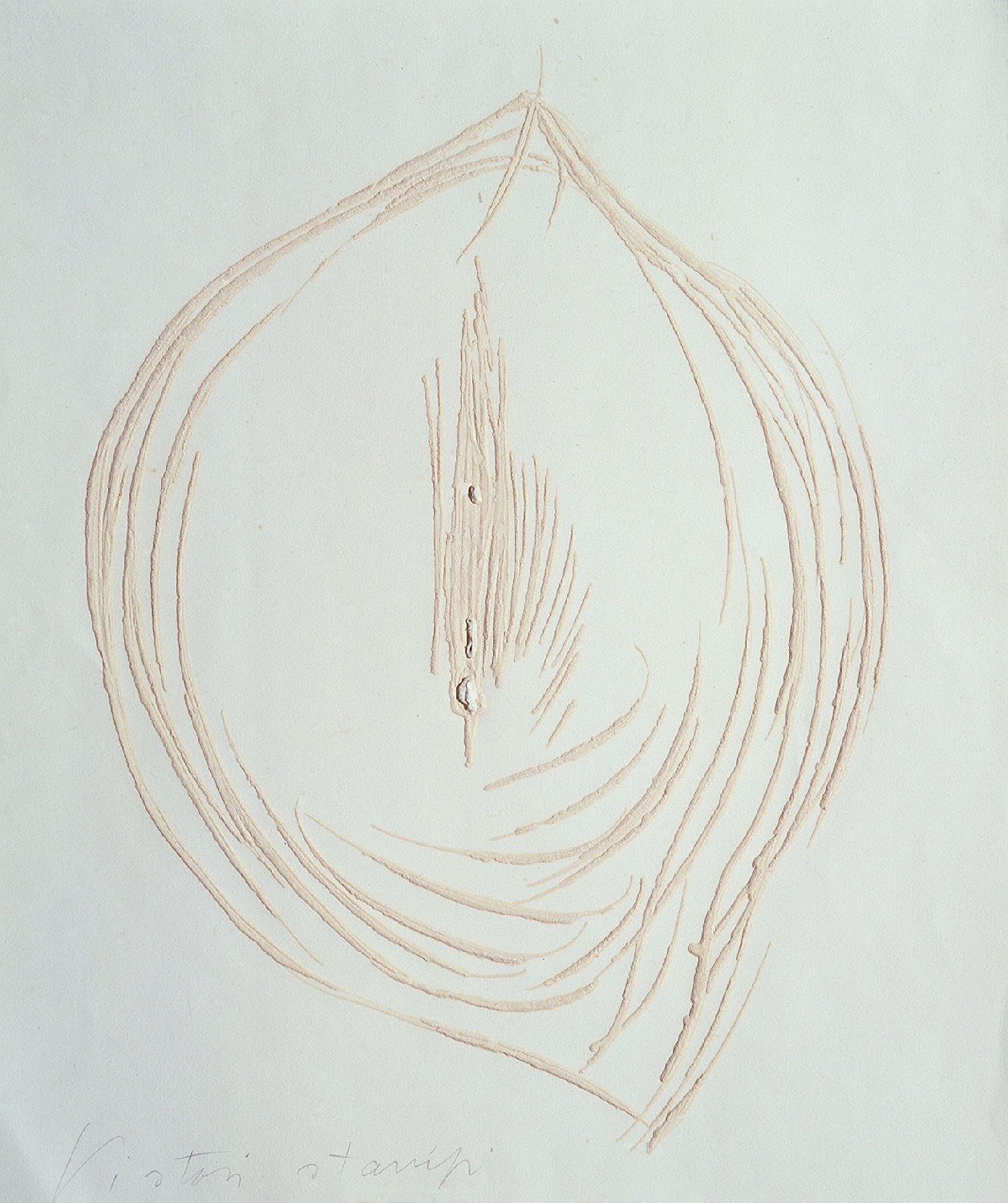 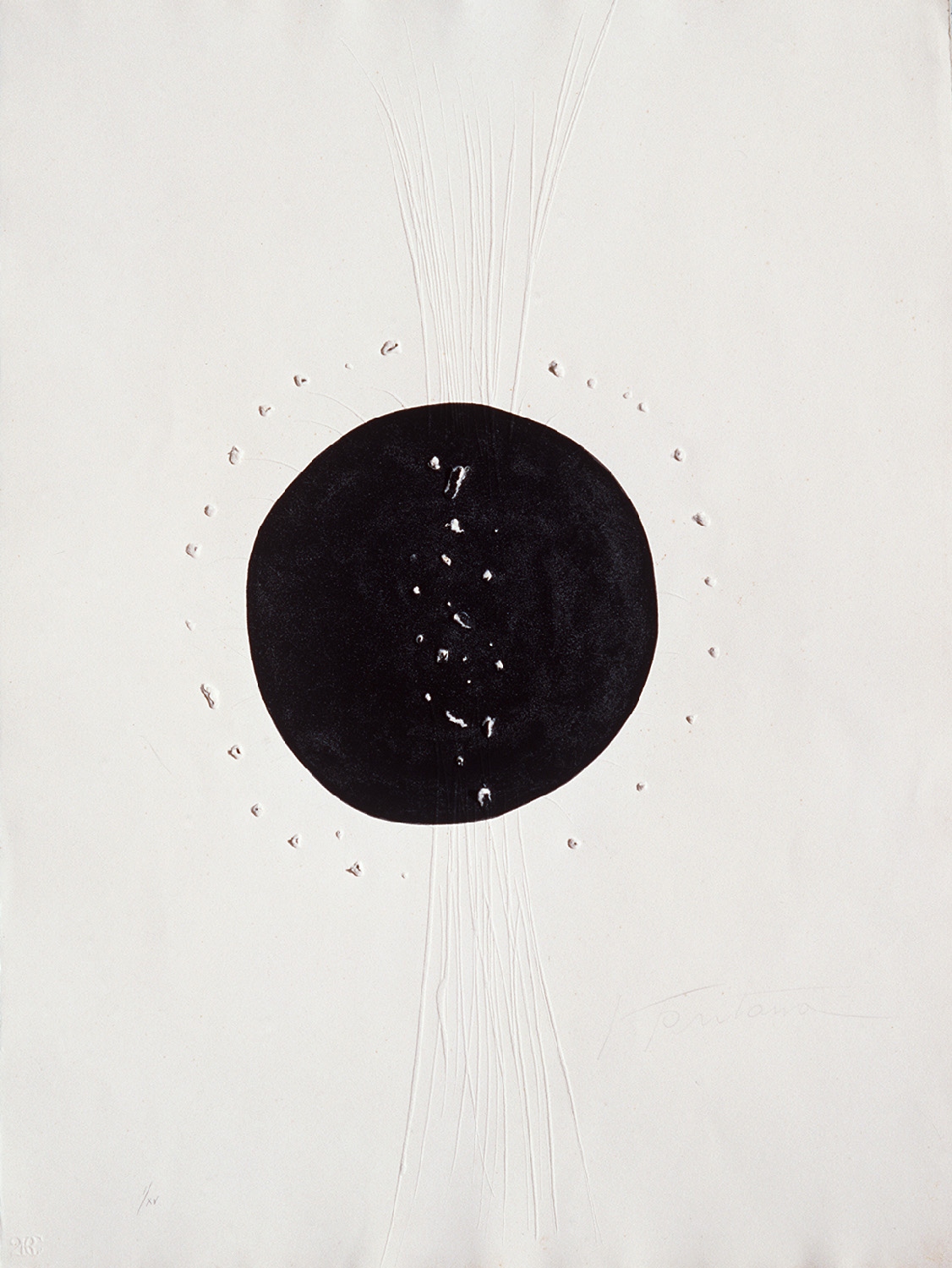 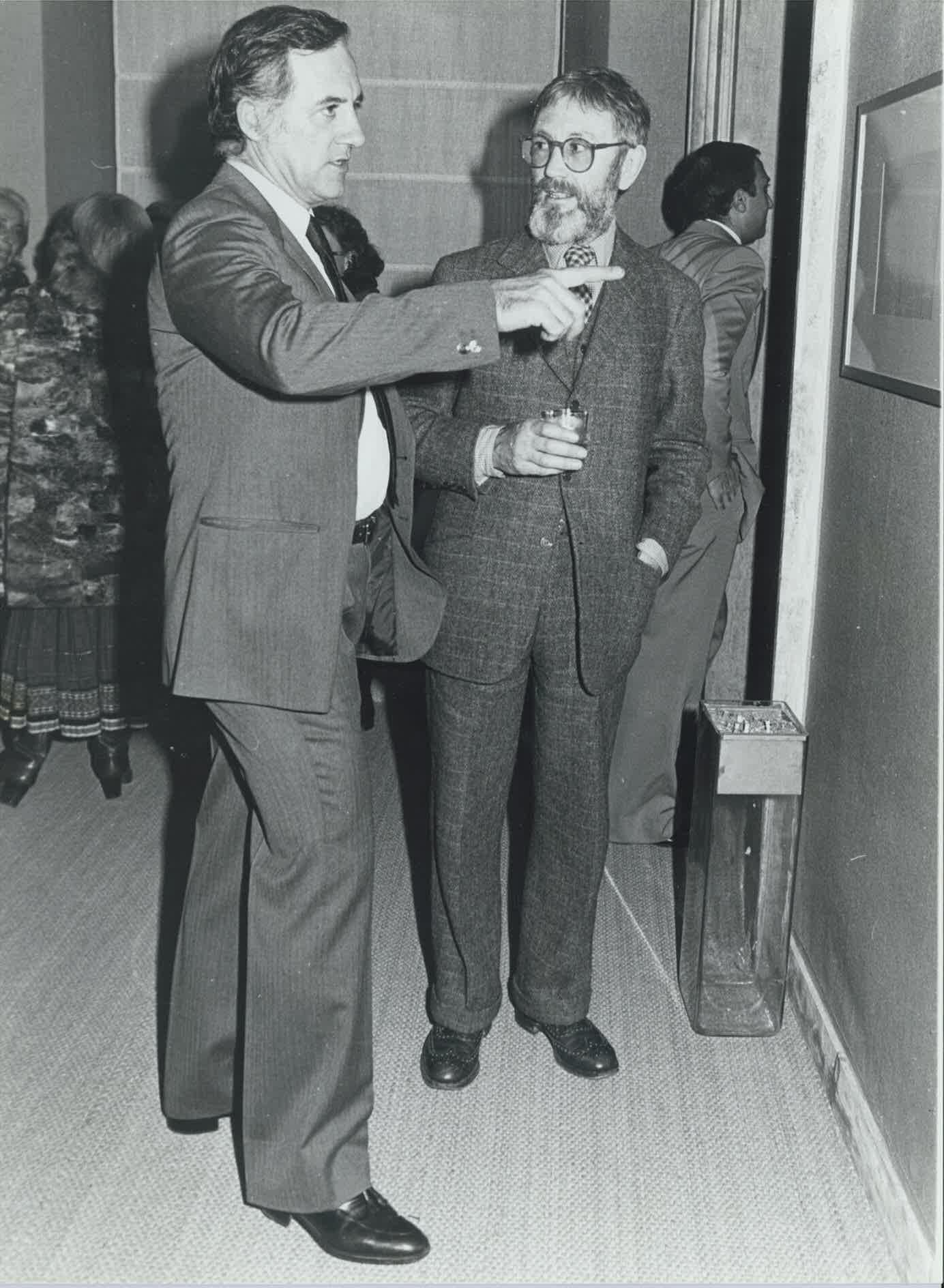 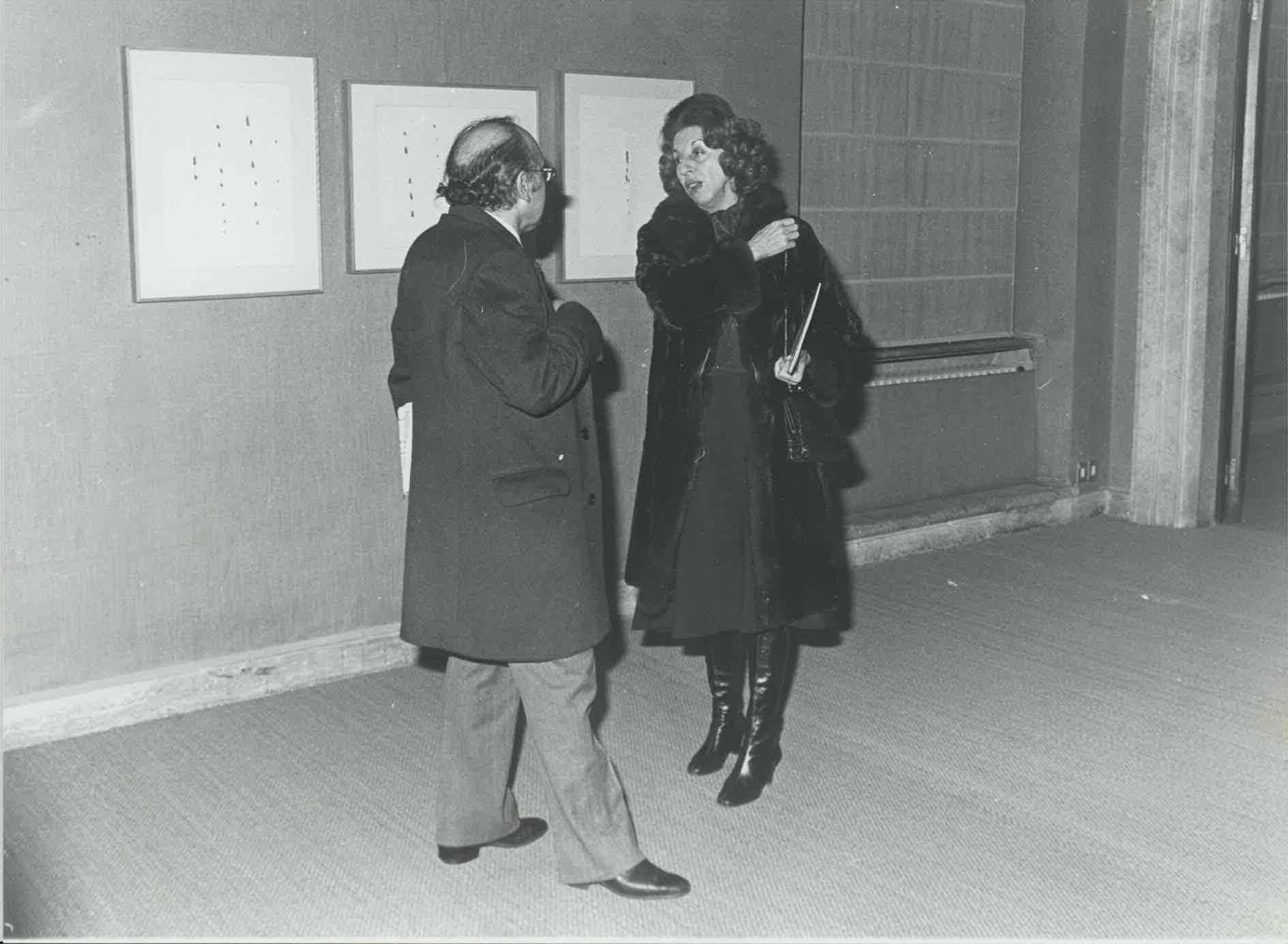 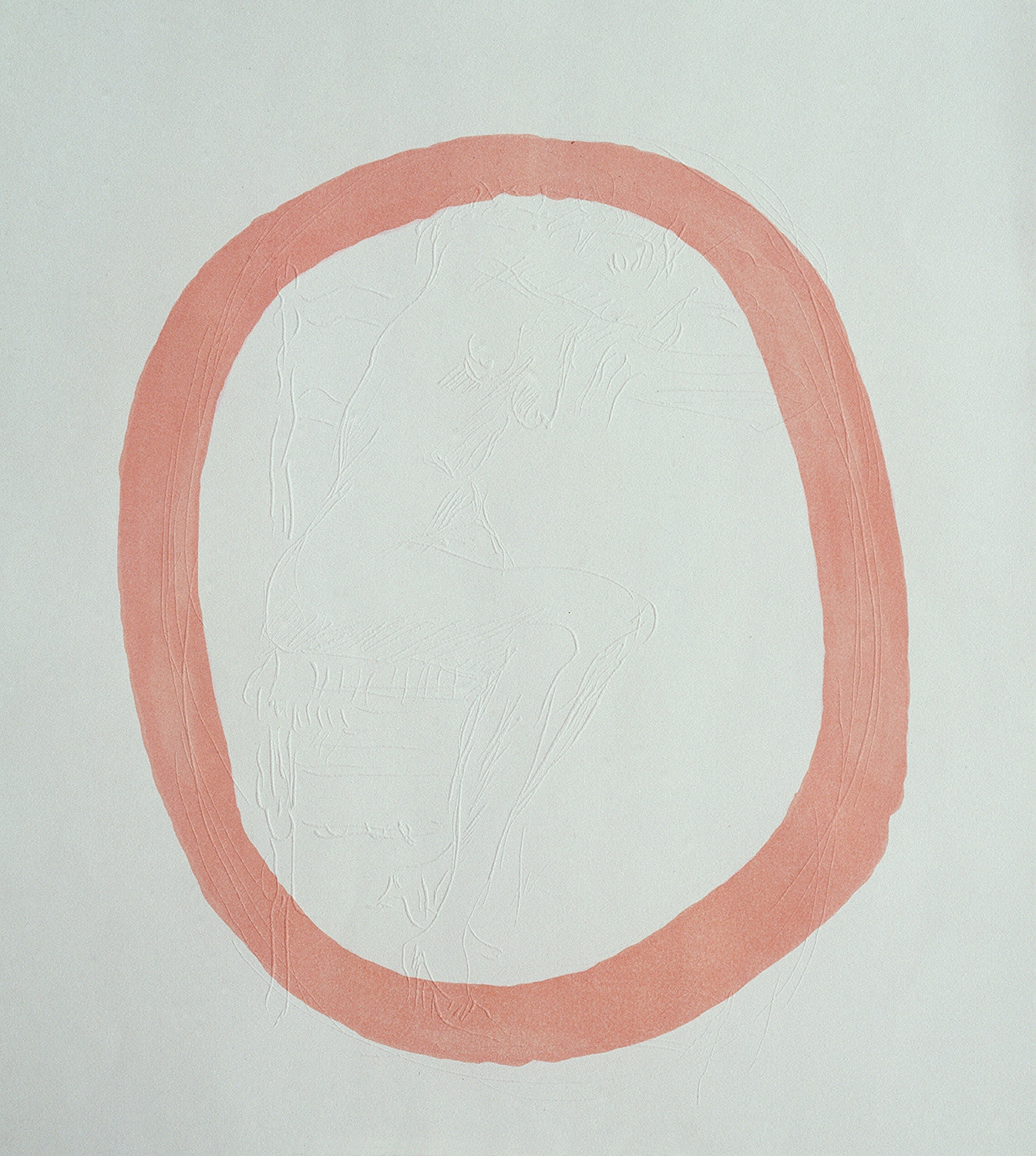 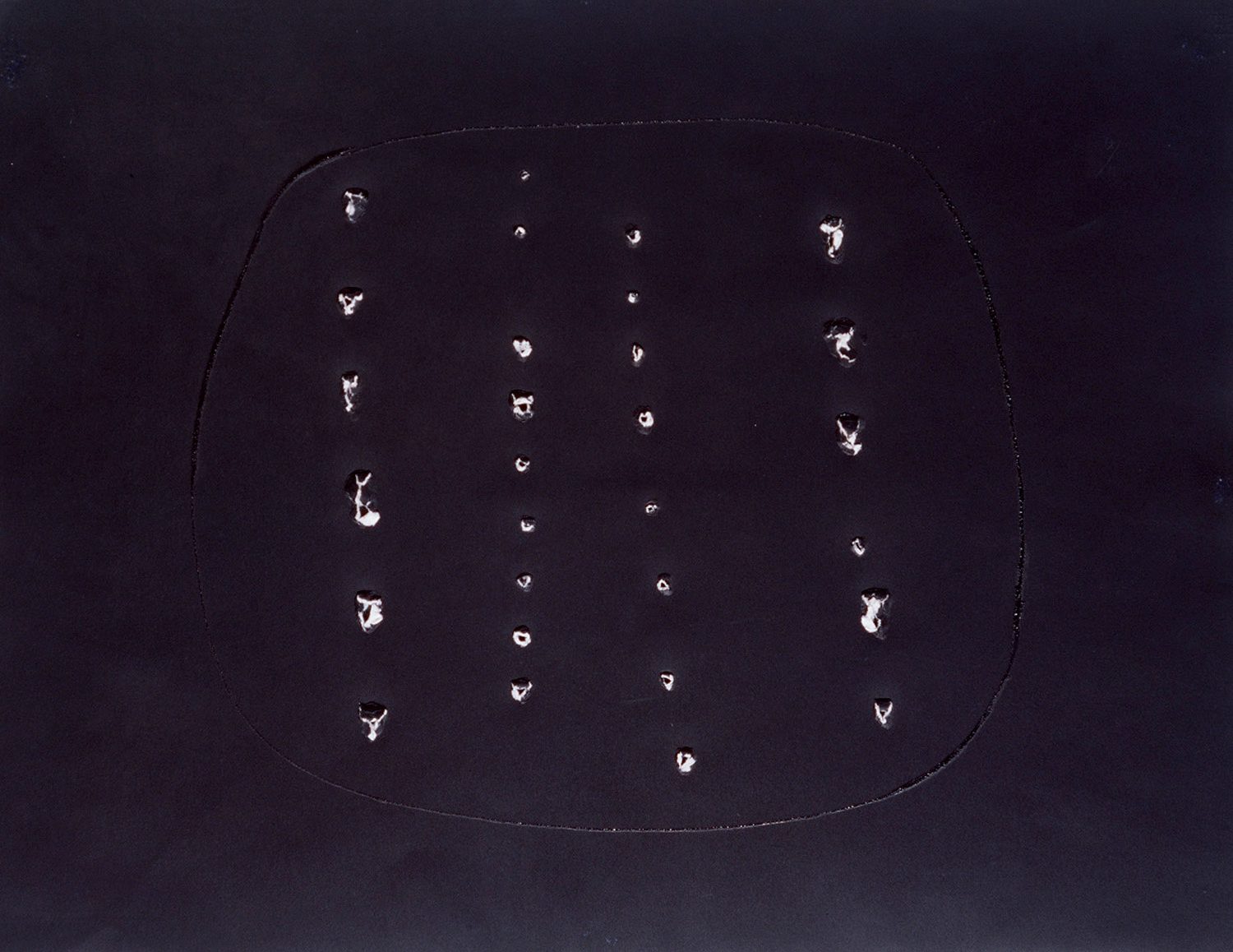 An adorned crown of white shadow drawings by Lucio Fontana, from ancient to more recent date, returns to the light; and in a special way a part so devoutly, with veneration, protected by another sweet shadow, Guido Le Noci, his friend, who has restrained - from dispersion, and with anxiety, the light, frail bodies, so rich in existence, as, in the long descent of foliage, of the prophetic tree, comforted, absorbed and enchanted by the beats, the ashes, the dark flashes, the ephemeral sleeps, the incessant marked shots, the rich censorship of the pulse; in short, the witnesses of life and anguish, in the contemplative state, nourished by Lucio Fontana, with his stubborn and severe joy, memorized and homiletics, white; proprio kerygmatica, the announcement, the utterance, the cadence, the lament; as a conjuncture, conjecture.

We ask ourselves: how does that point, that affects, that stroke come into being and grow? Which they call a backdrop, a bottom, an aura, from an abyss. It is the source of not knowing. And we, moreover, do not even know how a blade of grass is born and grows. There are many and many, daily, pages populated with roots and shadowed reflections, with inaccessible perspectives, with tiny eternities, circumscribed, raised and sunk; connection, conviction, conventus, gathering. Let every "point", every sunk, therefore be this; and also something else, silence, distance, loss of eye, and nothing: naive space between fall and phenomenon. Each sheet, each waved leaf, is an ideogram, the fetishes, the figures are dead. the elements dead, a panorama in embryo. Once the object, Gegenstand, ob-jet is dead, the person remains to divide the elementary into sub-transparencies.

The object is transformed into a mythogram, which engages instant existence, and accelerates its constitution in a warped, univocal and simultaneous order, and the entanglement, passionate, coherent, as a molecular, biomorphological repertoire, one would say; radical advent, the epic of the "spatial concept", the invocation, or prelude thus arises. We do not know how to correctly understand that very particular and very individual "spatial concept" which is that of Lucio Fontana, conceived and lived by him. That lightning-fast run around the groups (group, ensembles, summations, coronaries, corollaries, concordances, apparatuses, alignments, subtractions, dispersions) of holes, fringes, scratches. Apparently the continuous field boundary is the horizontal section of an improper spiral (dented, quadrate); horizontal, which then lays down and rests on the wall, which obviously becomes frontal, due to an obvious anatopic deviation. Flutter, rabesque, calligram, limit, in a mute condition? Hence "field", "point", "cut" in an uncertain meaning; and it is this condition, mute and even blind, all sensitive, thought, excited, that gives the impulsive, pulsating, existential and contemplative projection of this monotonous and at the same time so varied initialing and punctuation, its time of trepidation, its phrasing, its metric reason for doubt and contention: it is the tension proper to a great decision, each time restarted, each time repeated and initial at the same moment, initiative: and we define "anamitic initiative", that is, absent from myth. Certainly its surface of "spatial conception" will be portrayed as a decisive defeat and tenacious rejection of the geometric, the multifaceted, the axonometric, the perspective, the solidified, the polymaterial, the asperity of the jolt, that is, of the conventional antiquated symbolic regulations. : this poor little angry shadow of the pierced on the surface is one of the great etymological operations carried out by painting today.

Being able to settle down now in these very pure, brachylogical and intensified areas of elementary projections; projections multiplied by an unstoppable determination, we will be able to find the key to the slender and glaring metaphor that the genius of Lucio Fontana has given us. Space, in Fontana, emblematized the impulse and devitalized the deception, resurfaces and is only a single and coherent image of the woven imaginary, a pre-agonistic and agonistic stop of the voids of the soul at the root and without centrality, without center; is the search for the very abbreviated measure that coincides with our, human, inanity: minimal unity, minimal identity, in a supernal and parallel plane of slight asceticism, as if nuanced. Thought always concise and agitated, full of aim and emotion, as in sight of prey, objections abolished, in a visit of austere ineffable spelling, the tabula, the insignia of Fontana contain in their simple glow, the reverberation of a free happiness, and at the same time an unreasonable, inexplicable, obsessive happiness. They contain periods of superlative silences, devoid of comfort, arid and shady, shadowed-in naked dispute; paths of dreamy knowledge of transparencies, of dormant and idle (deus otiosus) creative insight (precisely the deus otiosus walking in Eden, taking in pure coolness, and no longer "doing" or "imagining" what to do); and infantile dungeons (infant, who does not fabula, who does not speak) procedures huddled within the gesture (the anatomical motion, of course; in itself revealing) of the nameless seal; the charged animation that moves what must remain inanimate: therefore I point and dig, scratch and trace of living nature, the shot released where we can read the strength of the weak, the innocent, the far-sighted.

Convinced of the vanity of art, Fontana translated the pure paratopic evidence of the world into signals of reason, into beats and tears of white, shadowed cognition, in re-thrust refluence: the fragment of time, the fragment of life, as verbum urens, a vibrated point, punched; the hole, we have said, as a summary attestation of the depth, the absence of the desert, its inheritance, as the inheritance in the promise of the pact between God and Abraham, distance, extensio, escape: the point (the wound), the tear (the slit ), is comparable to the great ancient, linguistic and cosmological intuition of Grace in its wandering, according to the Gnostic conception, as Verbum sub sabulis, 1ógos bypò psámmon (in the 'Oracles', psamathedón, that is "in infinite number, like the grains of sand on the beach ", with already the attestation of epigea without end, as in the Abrahamic pact) and the cutting, (caro sub sabulis, sarks kypò psámmon) flesh under the sand, flesh under the facies of the world, the becoming of the world itself contracts in a gesture without shelter, of zeal, illusion, dexterity, love of life in the void that holds it, as an undeciphered testimony of evoking the homogeneous under the given surface: chosen as deserted by blood and memory, and only signaled, obsignated, the surface you ask for ere, capture, kidnap in rapid aggression, precisely the homogeneous, the unspeakable, the perennial dictum, the 1ógos aiónos, the thinking of time, according to the Gnostic mind.

But the sign as a blow, which ceaselessly moves and renews the ancient pure model, the model of Fontana's "spatial conception" proposes, with animation, the analytic encounter of the desert of the inner fantasy with the power of the eye, surprised and identified from the unit of measurement: the linear motions of the mind present in acquiescence, in pauses and arrests, and before the eye meets the world; our falling, our judgment, our rightness: a point, a crack, a trap door, a loan of unknown freedom, of innocence, of validation, an Autophysical journal. Each note is a punctual moment of amazement or pitfalls, repeated and in itself unrepeatable; the hollowed out and removed point evokes with an ancient confidence, with purified imagination, a cosmogonic percentage: like the right of a flick of the eyelid to signal, signify, a text, a plot, a system of trajectories, a habitus of vehemence, a myth of hidden energy, a call, a nailed archipelago, a nailed galaxy, a multimillennial paradigm of a simple, instantaneous, simultaneous universe. Short suspensions, short parentheses, attracted into the minimal void of free leap, into separation, into the equilibrium of immobility, into the stubbornness of duration without number, reassuring and restless in the contested phase of revelation, the absurd and the real freed from necessity and from mimesis, from pressure and from normation: therefore, with this synoptic table of interior acrobatics, so close to death, the empty hope of regaining a future soul as a pure desert spectacle for a universal party.

We look, with a mind free from the falsehoods of figuring, at these white boards with holes: trying to imagine the distance that separates filitura split hole from their miraculous truth. The dominant tones, the summons and aberrations, thuds and accumulations, recurrences and layers, stops and fluctuations; the start-up and magnetic table distribution, with multiple flexions and meanders; with refusal of centrality and frontality, with the Gnostic notion of "field", where "imprint" or "compute"> "punch" or "forget", corymb, constellation points, as isolated, definitional sentences, anatopic syllables and molecules samples; very delicate, histrionic handwriting with a pitiless bewilderment, in the process of abandoning itself to limiting shadows, of rejected thresholds, a calculation similar to celestial calculation; the drop with the idea of ​​weight and the saliens gush in vitam; atmosphere of exile reluctance to useless homeland, mental roughness where superficiality and unfathomability are identified, the uninitiated and the last (èschaton) singular.

For this reason, we accompany and greet, without saying or repeating, the light shadow reappeared by Lucio Fontana.