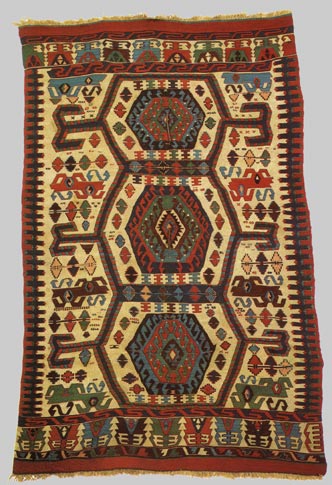 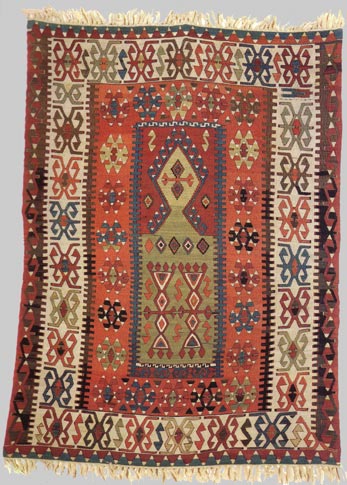 2nd Half of the 19th Century

IThe term "Kilim" (from the Persian "Gelim" and from the Turkish, "Kilim") indicates a flat type fabric and, unlike rugs, without frizz. Today in use in European languages ​​without variations, except for the German "Kelim", the term was mostly unknown just fifteen years ago. Similar fabrics are also obtained with other techniques such as Zili, Soumak and Cicim, but in Anatolia Kilims are prevalent. They were produced for personal use by nomads, and were the only furniture they could use in their travels. The concept of European furniture did not exist and utensils, clothes and food pantries were stored in sacks and bags of fabric. Kilims of small or large format while adorning the walls and floors protected the tent from the inside, others were used for praying. The curtains themselves were often woven. In southern latitudes it was sufficient to work them with black goat wool while in Central Asia, towards the north, they were seen in the shape of a dome covered with felt.Kilim is a popular art that is disappearing and perhaps for this reason that for some years now growing interest in fabrics is accompanied by serious studies on their origins, which obtain surprising results. It is probable that the origin of the designs on Anatolian fabrics can be traced back to the beginnings of the Neolithic in Asia Minor, and that already a few millennia ago flat type fabrics very similar to those of today were made in Anatolia. And it is also this past of history that makes kilims an art object and that clearly distinguishes it from the carpet.