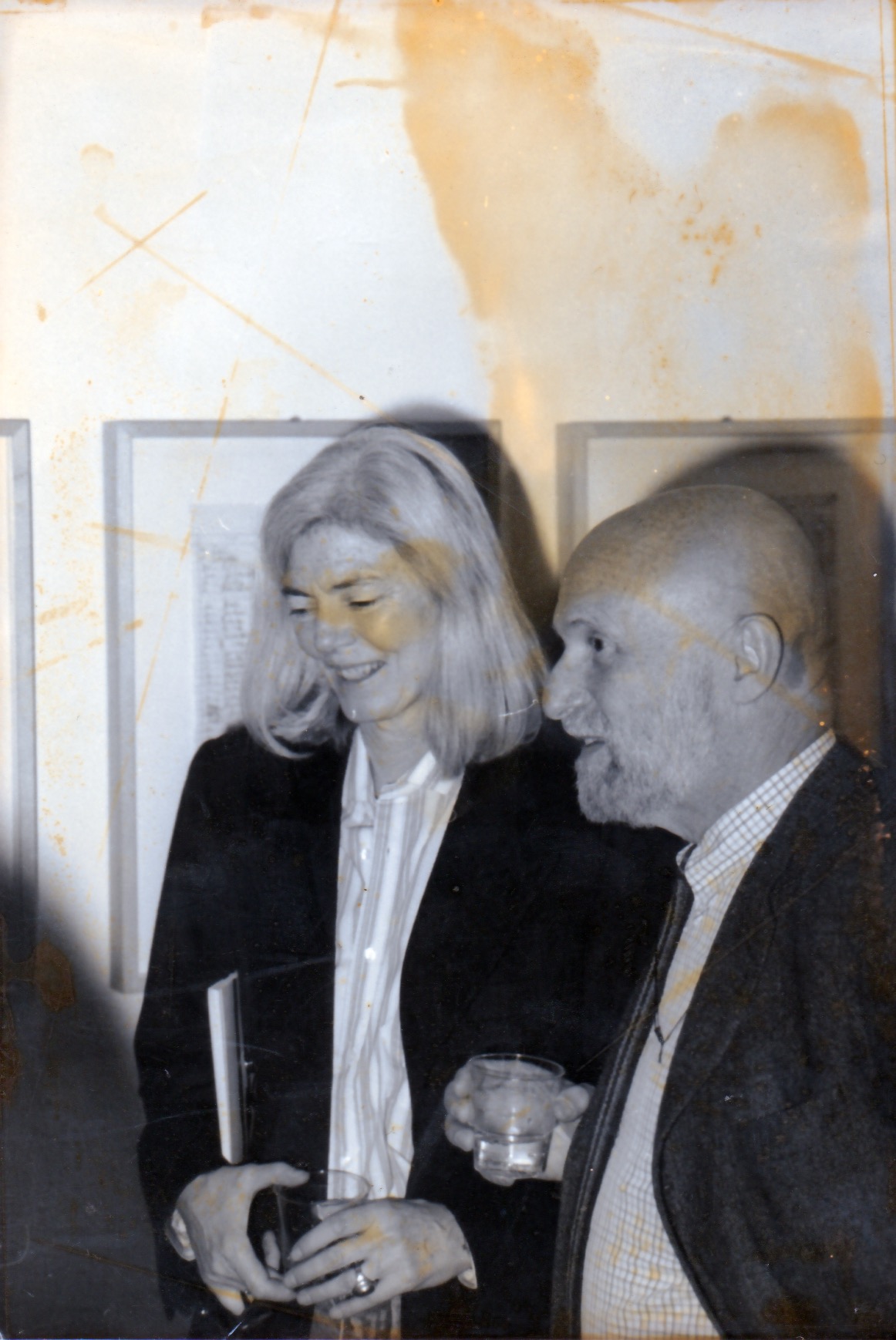 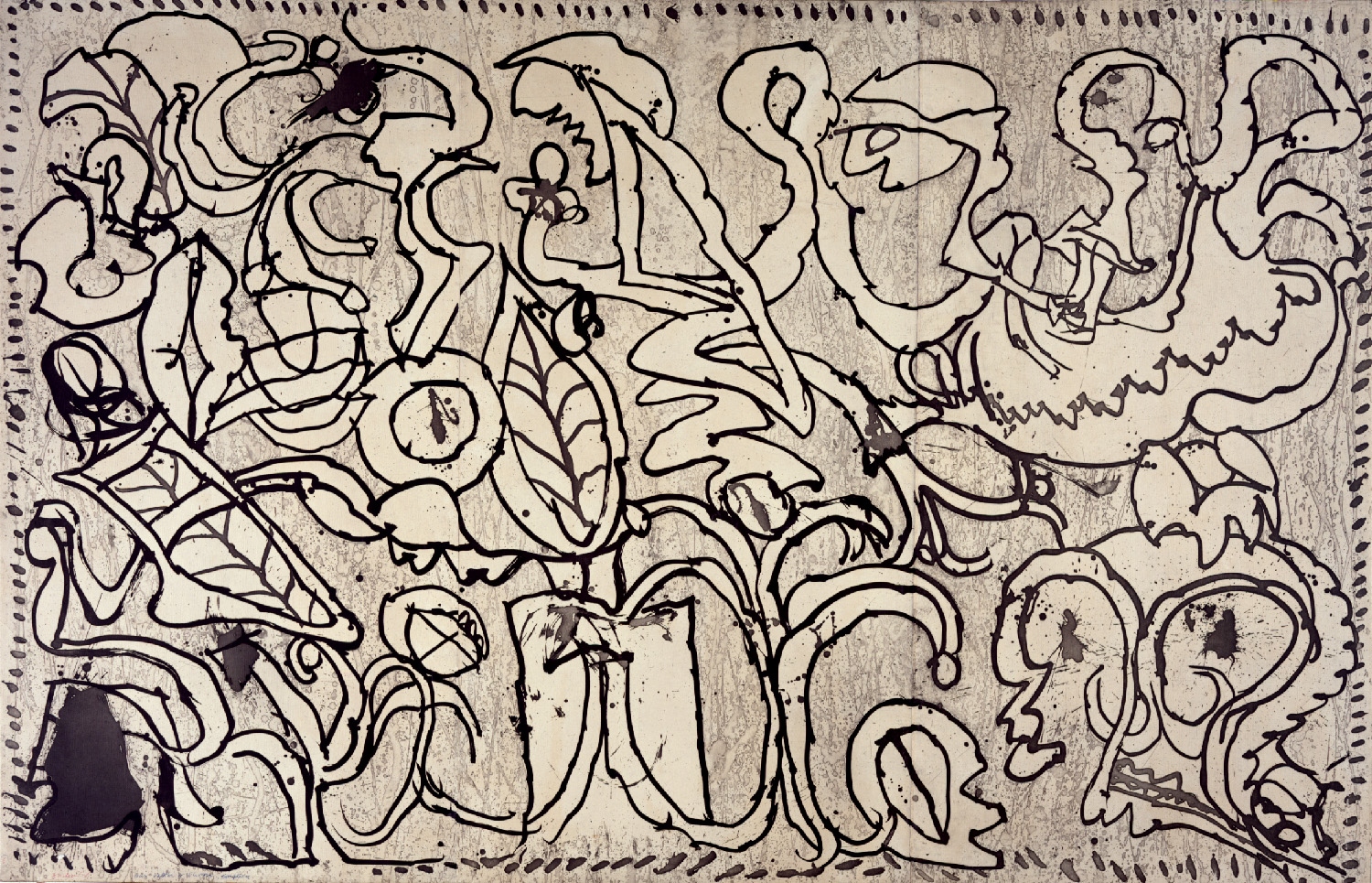 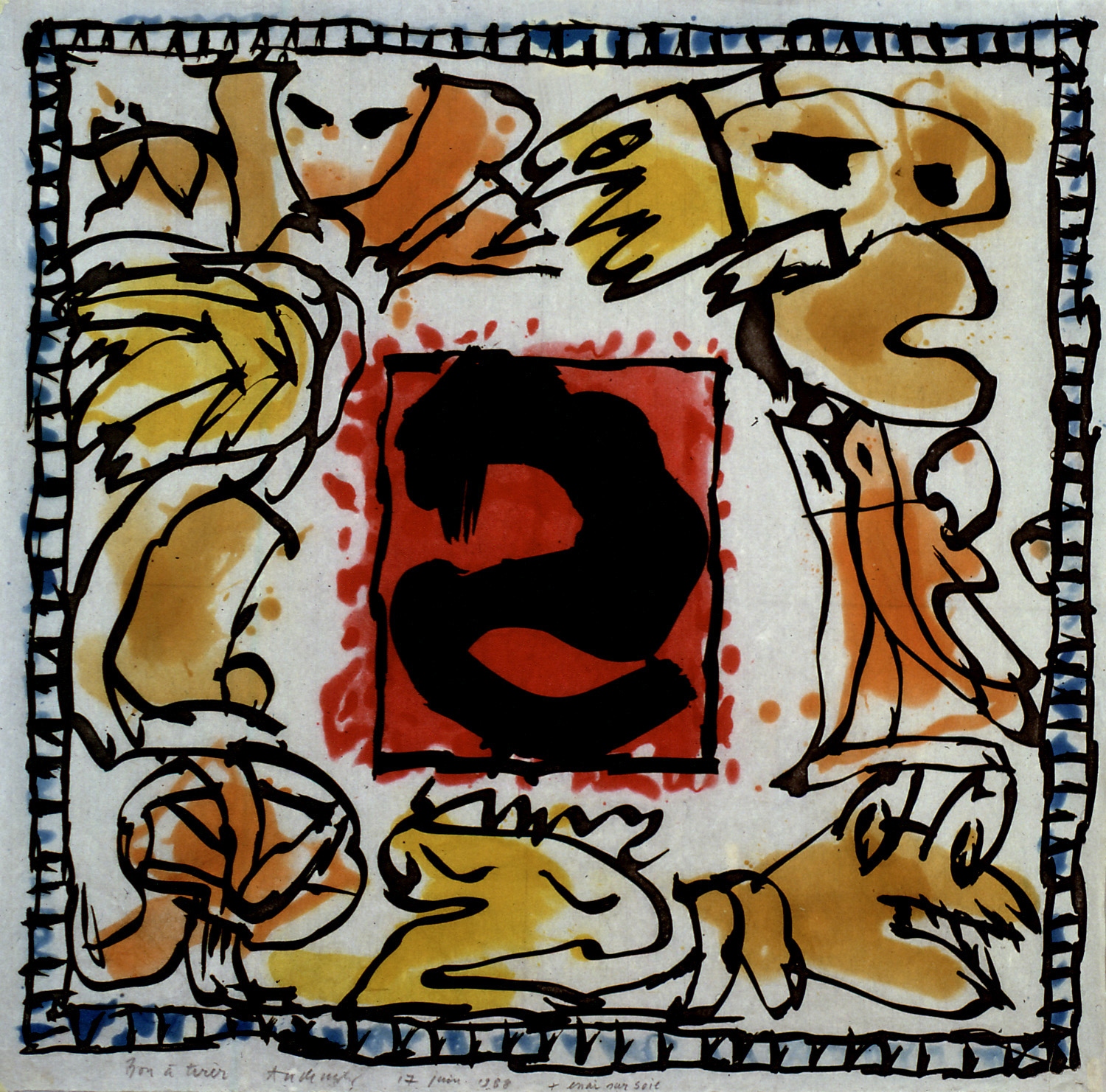 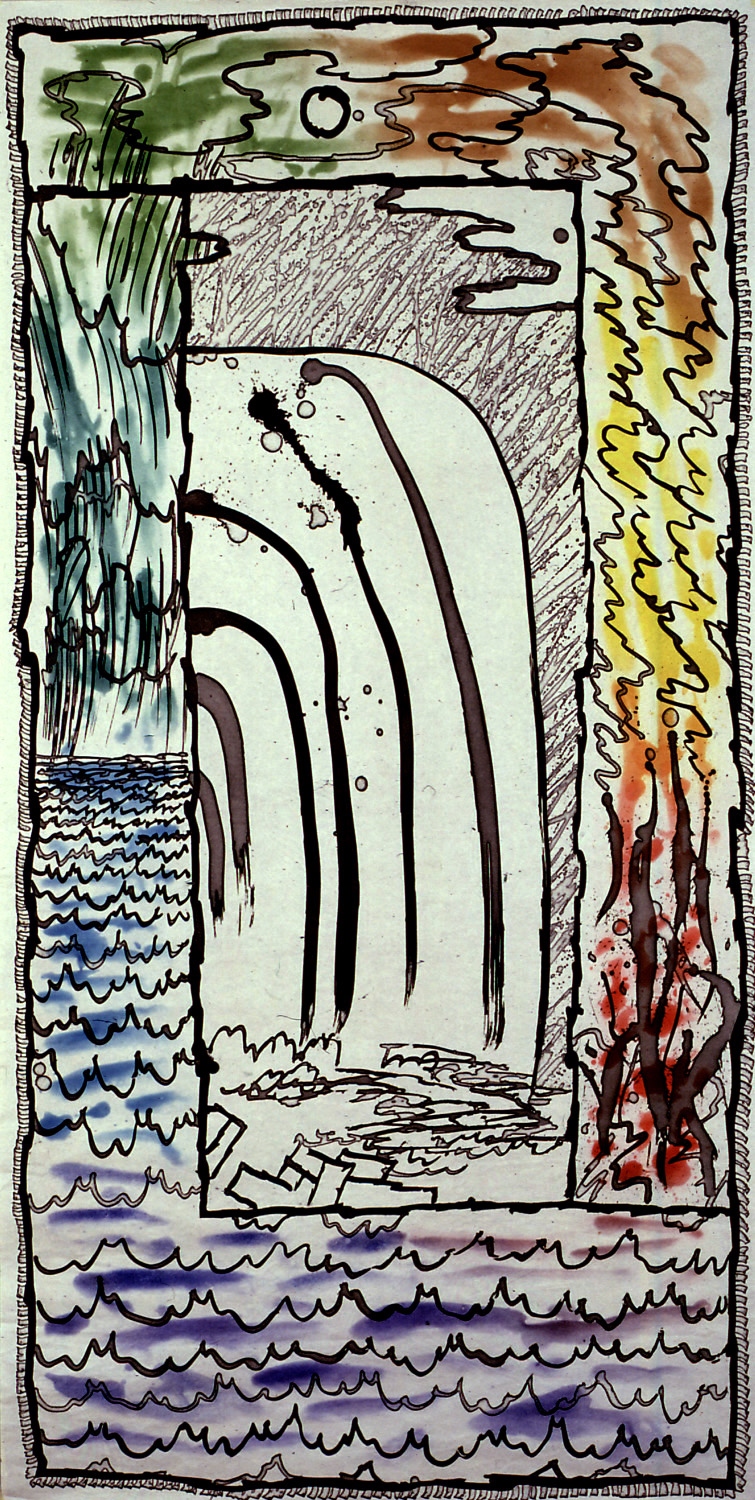 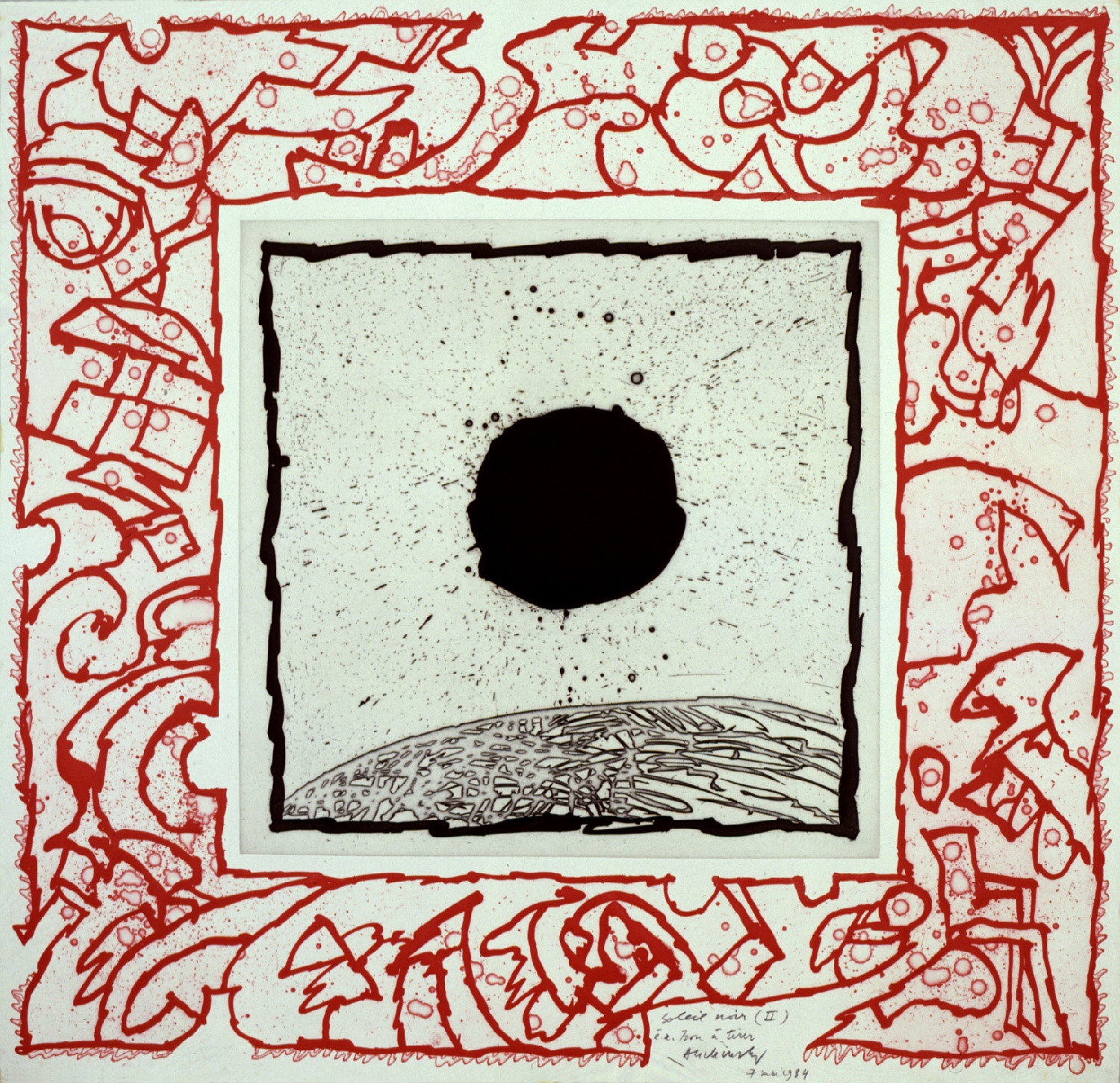 Strying to reach the spontaneity of watercolor, painting directly on the prepared plate with a grain, this allows a way of working that is close to my painting. I usually start with brushstrokes that provoke my imagination. Then I draw, I follow the image. Miro said of himself I work as a gardener ”and I work with two feet in the dream. I treated the first plate as if it were a watercolor. Valter showed me a proof and printed the image on a second plate, as a kind of aide-mémoire, it is useful for making decisions, when I say decisions, I mean adding and deleting, similar to the montage technique (cutting and adding) or how to write it. The big difference between the writer and the painter is that the painter reveals his own traces of the elimination, while the writing hides the hesitations of the writer. The painter shows his second thoughts, his corrections ends up loving and imposing them. Entering the printing house means leaving the solitude of your own studio. Having preferred the café terrace for forty years, I opted for the warmth of the printing house. For seventeen years I had a large press at home that never stopped working. In 1984 I succumbed to an experience in teaching… I was a professor of painting at the Ecole des Beaux-Arts. This activity, which was fortunately ephemeral, totally disorganized my printing house. When I regained my freedom, I immediately began working with Valter in his new studio in Rome, which I had never seen. I made some large incisions. When I say some, I mean such a quantity and in such luxurious condition that I quickly decided to get rid of my press, much to the delight of my wife who had been waiting for that moment to enlarge her kitchen for a long time. I would say that in fifteen days of intense work in Rome, while the staff followed me like “servants d'une piece d'artillerie”, I produced the equivalent of one or two years of work on my press. Valter has perfected an almost too perfect aquatint technique that I sometimes have to disturb. This technique, so it concerns me, which provokes my naivete. Briefly: there are times when the artist even having a Steinway at his disposal, takes pleasure in playing with just one finger.