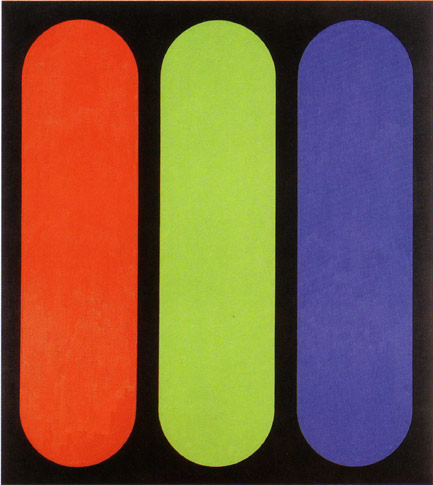 The young age of the artist determines a particular way of approaching his work. Rather than underlining similarities or trend parallels, I find it useful to dwell on the nature of the image created because it transpires, dramatically captured in the compositional mesh, the very essence of Cristiano Pintaldi's art.

The artist uses, without conceptual and cultural bias, the television image or rather the product that emerges from the technological medium in the form of an image. Television, now installed in the culture of our time, seems to live its organic naturalness, grafted into the social fabric of life. A television therefore that implies familiarity and acceptance, of which we know the character at times boring, at times rebellious, but still intrusive and inevitable, like the presence in the house of a neurotic but beloved uncle.

And therefore, in the secret of the personalization of the television medium, almost in a gesture of candor, the artist allowed himself to be guided by a very sensitive suspicion: that is that, beyond the sudden manifestations and the intrusive omnipresence, the cube-relative possessed one soul.

A long and silent work of observation allowed Cristiano Pintaldi to free the "form" from its superficial manifestation, making the technological secret of the image coincide with its internal content - giving us back the secret soul of television -. I mean that, overcoming the rationalistic limitation of visual research, this artist has operated in emotional terms. As if to give back to the video that secret dignity that is not so much decipherable in its finalized manifestation of the product, but in its sophisticated nature as a computer, a skilful transmitter and, in spite of itself, a manipulator. pictorial, makes the reticular image repetitive and geometrically characterized.

The structure of the paintings is therefore configured in a first obsessive and rigorously prepared draft. But this initial phase is followed by an estranging and poetic phase. The artist bends the fixity of the mesh to his own "vision" and opposes the homogeneity of the technological fabric with the appearance of lights, shadows, elusive and yet real presences even in their vague conformation. The real therefore coincides for Cristiano Pintaldi in the revelation of the secrets, of what is not only hidden but above all that has been elaborated and altered.

Every complexity and every trick presuppose the essentiality of a strategy, a privileged condition that acts by superimposition, distancing its reality from its manifestation.

The first solo exhibition of this young artist is an opportunity for rethinking and optimism. Beyond the image or before the image, we viewers exist, and our eye is responsible for the ability to see even what has been hidden from us.