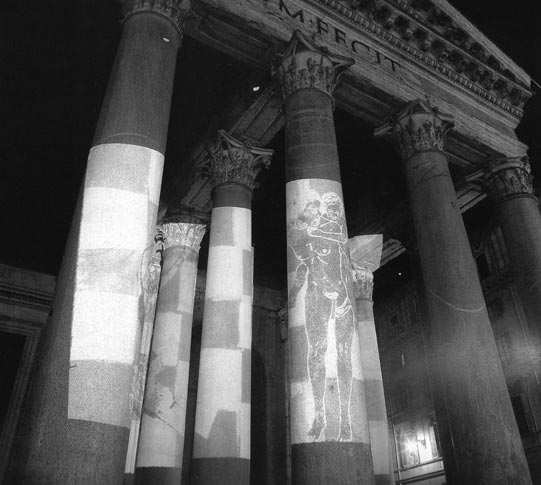 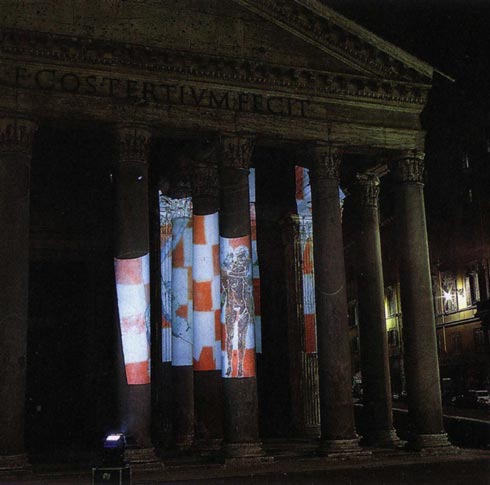 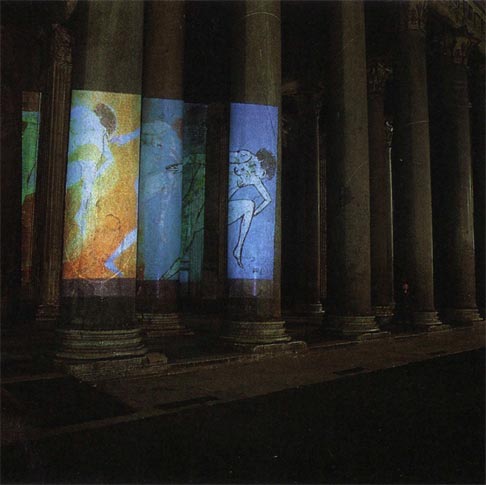 Nancy I hope doesn't want to talk about women. Neither talk between women. He wants the word of the women. The language of women. And it is not a feminine word nor a feminist word. It is an ancient word, a chant, a whisper, a constant background that has accompanied the story, like a subdued comment. It is an image that repeats itself, chases itself and gets lost in an infinite cartouche. Nancy Spero leaned it against the walls, stopped with light points, suspended just between the air and the wall: exactly like a veil, or rather "the veil" impregnated by all the faces of the woman she has covered, by all the bodies she has hidden, from all the rooms to which he denied direct sunlight. Those stories that had to be kept silent were printed in the weave of the fabric and now they are finally revealed in the form of a frieze that from Ancient Egypt comes down to us, always telling the same story, which is repeated like a dirge, between whispers and cries, always under-tone or over-tone with respect to the perfect and marked diction of the Word of History.

Peinture féminine. Thus, in French, the artist wants it as the equivalent of the submerged and denied écriture féminine language that had accompanied humanity, had imprinted itself on the unconscious, had formed our minds and yet had never had the right to access it. Encyclopédie. The French feminist writers in the seventies sought and reworked that language, to restore the dignity of writing. And dignity of painting Nancy Spero tries to restore to the icons of women removed from the judgment of history and left to fibrous, floating in a different and different time and space, where Marlene Dietrich can accompany the Egyptian flute players, and the venus steatopygies of primitive epochs can settle alongside the anorexic ones of the contemporary epoch. All there, emerging on the walls to connote with their presence a space not modified in the structure, but subverted in substance.The peinture féminine does not point the finger at victims and executioners, it is not satisfied with the news, it is not the daughter of politically correct, he does not chant slogans, he does not use images of reality to denounce their horror. It does not shout messages but works deeply on the structure of language. And in this Nancy Spero betrays her European education, her studies at the Ecole des Beaux Arts, her stay in Paris, a political commitment that aims first to change thinking and then to change the world. This was also the case when, in the early XNUMXs, Nancy Spero used the word to tell facts, to print stories of goddesses and common massacres drawn from books and newspapers on paper, with overlapping texts and fluctuating words. The story went, came, stopped, as if it followed the rhythms of a breath, of a spoken and unwritten word. Once again they were the words of women, or of victims, words spoken by those who always have a second and anonymous role in the great scenarios of history. Nancy Spero: “The ideas and the words are not aligned in an orderly progression but they linger and restart, spin around, change direction and context. This is live speaking - the voice behind formal speech (which intimidates her). And the women whose writing is located outside the verb (logos) and who have been excluded from the canon (of art and other things), have been the guardians of the language, of the mother tongue. The voice of the non-linear, lingering (full of empty spaces), intimate (non-authoritarian and body-related) female language corresponds to my visual language (peinture féminine) ”.

Peinture féminine. It requires a lot of work. All those cut out, glued, printed, watercolored figures that swarm on the walls, climb, dance ... An industrious and potentially infinite texture that can cover every wall, every wall, every thing, the whole world like a spider's web ... which begins again each time as feminine gestures, each time equal to themselves to nourish, care for, nurture, educate the whole of humanity. Each exhibition is a beginning that is ideally linked to another exhibition, each installation belongs to the series of all installations. The figures return, repeating themselves, from show to show, from installation to installation, cyclical like the time of women, like the rhythm of the moon returning to itself, starting to appear and disappear again each time. Who are they, what are those figures doing? They are what they do. The flute player, the dancer, the harlot, the actress, the acrobat ... 1 their gestures baptize them more than their names. Finally, here, the protagonists of the human comedy.

Peinture féminine. And finally the color. Only now (in the works of the last three years) does it spread out in strong backgrounds. Those women suspended in the light, in the air, in the void have a background, a screen. No more discreet presences, no more 'genius loci'. Nancy Spero exposes them to the comparison with painting: the great tradition of American abstract painting, the great European chromatic tradition. Now his figures have to measure themselves with the space of colors, with their resonances, their symbologies. The subdued chorus has turned into polyphony, the uncertain word into song, the breath into sound. But the peinture féminine has such an ancient history that even the Great Painting is dragged into it. And the colors, the backgrounds, the geometries, are absorbed harmoniously like tiles of an immense decoration that from the textures of a carpet, from the edges of a plate, from the drawings of a fabric expand until they openly challenge Painting, assertive and uppercase. And here is the infinite cartouche instead of the defined space of the canvas, here are the colors that wind and slide into each other against the absolute control of chromatic textures, here is the dance between female figures and color geometries that denies the struggle conceptual between figurative and abstract as a distant problem, a discussion that belongs to another place. Because this is another story: it is l'histoire féminine.