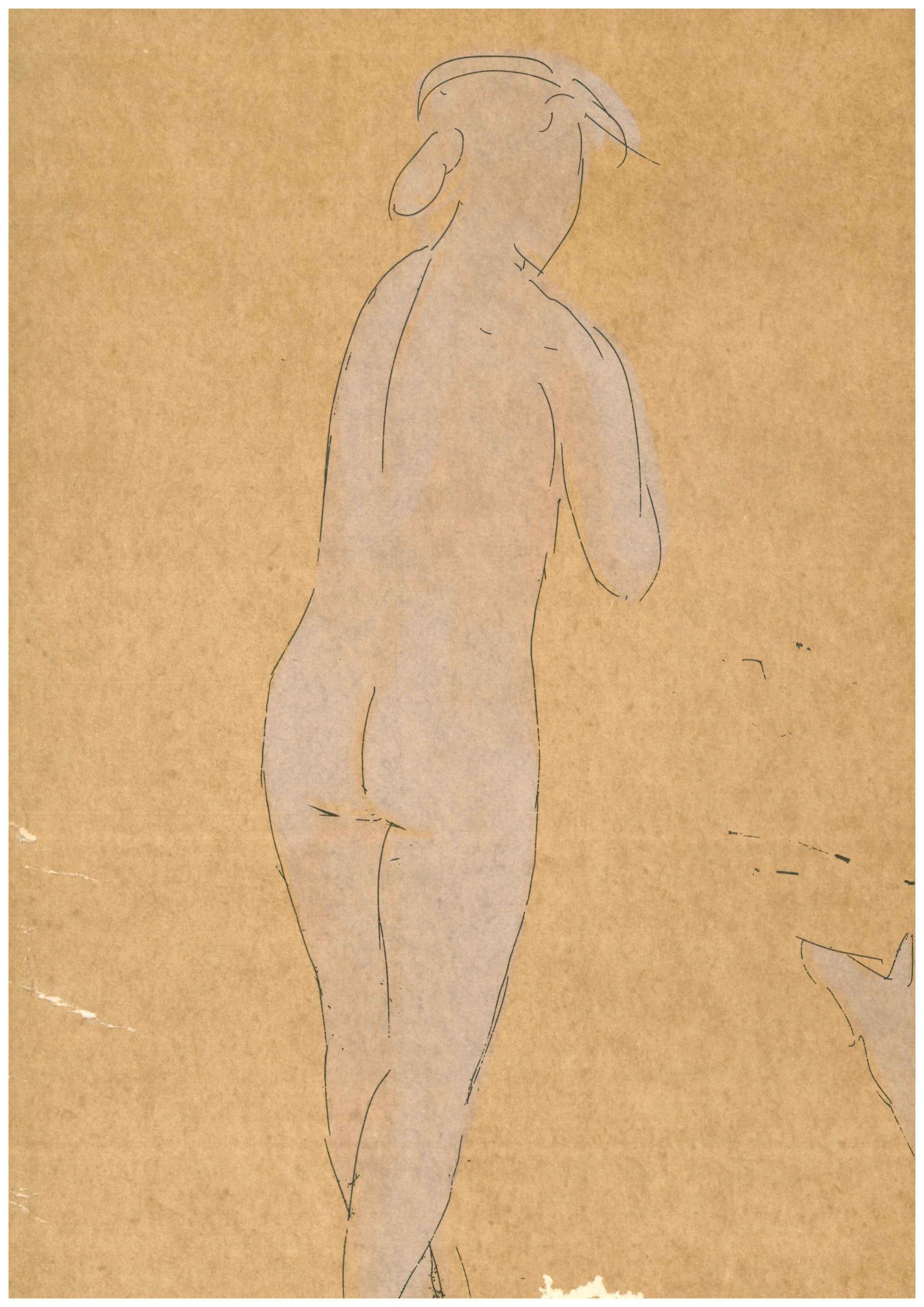 The drawing for Manzù - it is therefore, albeit indirectly, engraving, given that, as we will see, for him there are no profound differences between the two genres - and has always been a primary moment in his activity. And after all, from Michelangelo to Bernini, from Rodin to Giacometti, sculptors are among the greatest draftsmen. It is no coincidence that drawing is the visualization of the form and visualizing it and understanding it thoroughly in its structure, in its volumes, in its rhythms. Design, therefore, that of the sculptors, eminently constructive but also an irreplaceable means to filter or decant those more emotional components of the form that often instead make one with the material. In short, it is felt in the sculptors' drawing as before that in space, embodied in matter, forms live in the spirit. But on the other hand, this "life of forms in spirit" is not exclusively abstract. We remember Focillon: «L'idée de l'Arte is form, et sa vie affective take le même tour».

If Manzù's artistic vocation was very precocious and completely irrepressable, one can not say the same for his search and conquest of a style or an autonomous language. We will not at this moment dwell on all that has so excellently and exhaustively been written on the importance that Maillol, Medardo Rosso and Rodin had on the young, barely twenty-years old artist, nor will we list all of the exterior convergencies which have joined in helping to form and mature him. It suffices to mention that his «preistoria» which dates from 1929 to 1936, and which although promising and temerous in that «naturale germoglio di vita», demonstrates how with great persistance and fatigue, Manzù searched not for himself, but for a style of himself, as one searches for a finer, more sensitive second skin to attach to the thicker and warmer layer of skin of temperament and instinct; a style which for him could have only been born of an exclusively intellectual or lexical research and experimentation, from that varied exchange, ·that unceasing outpour of art and life. Manzù was not born a «virtuoso», and for that reason he never became nor could become, a mannerist. Although he now possesses the sharp instruments of a prodigious profession and of a technique which in itself has become a «creative activity», today much like yesterday, he continues to have doubts, to search for and to find himself. At this point, one must pay special «tribute» to Manzù's hand, faithful ally of his daily creative labour, it is the sismographic captor of the ideas of the forms, and at the same time, wise and swift. A perfect example of this solid alliance can be found in the artist's latest drawings, defined by Brandi as a «surprise» because of «an unparalleled perfection and yet, not at all academic; of an impetuousness of the sign which makes the image stand out from the paper». Well then.. I feel the same surprise repeated in these most recent prints.

It is above all, the clear will of the form, so fresh and direct, yet precise and rational which constitutes the captivating charm of these pages Aside from the uncertainty and caprice of the bite, the «sign» itself resolves and becomes everything. Graded and modulated by the force of the hand's touch, at times brief, aggressive, cutting, and yet, it can be fluent, caressing and light, it can be exact in approaching matter with a constant controle, and boldy dynamic when the urge for expression is lost feverish and impetuous. The color which is delicate and similar to the transparency of a watercolor, has a gentle simplicity; one can almost feel the scent of freshly cut grass. This very color reminds us of certain drawings by Rodin of young, «budding» female figures in movement, with brief spots of color in their hair and clothing, spots of red and brown, of pale blue and pink. But while one feels that Rodin outlined these poses almost without lifting his gaze from the model, here, each pose or gesture seems to be'gone over again' or relived mentally, thus bestowing onto the image a mental abstractness.

Manzù etches with a soft point similar to a pen-nib, and confronts the plates with vehemence and without correcting. He explicitly comments: «Very little cooking, no oil, no butter, and if it doesn't work out, we start over from scratch». Nevertheless, as sometimes happens with sculpture, at times there remains a trace of energy, a rare unutilized line, an operative fervour.

The themes for these etchings are all well known. Manzù has been carrying them around with him for a long time. He can sometimes drop them, but never completely dismiss them, they were born with him, with his maturity as an artist. For example. «II pittore con modella» (painter with model), of which the earlier prototypes date back to 1935, and «Amanti, I» (Lovers, I), this also a recurrent theme over the years. In both cases, it involves a formal problem, that of two figures drawn together, and it is the very fusion of the figures into a single structure, the interpenetration of the volume, the entanglement of the garments, which interest Manzù. But on the other hand, the forms would not have such a spring, such exciting strength, if they did not have the fuse of a real and profound sentiment which was lived, rejoiced, suffered and impassioned. There are the portraits of Inge, sharp, yet soft and charming images which Manzù so lovingly and firmly possesses, that he could have etched them blindfolded. Of great essentiality, «Busto di lnge, I» and «Busto di Inge, II», are perhaps the most beautiful. Manzù removes without impoverishing; the solemn figure is never meek like a languid Elisabeth Siddal, even if wrapped in copious garments much like the pre­Raphaelite heroine, Apropos of this, one sees the difference in the folds of the garments, in the modern rendering, always «worn by the figure» as was the way with Leonardo, and never cold copies of ancient models.

For a long time, Manzù's etchings were relatively unknown. Most of these works were single pieces (editions of one), or of very limited editions, afterwhich the artist destroyed the plates. They were shown for the first time in Venice in 58, at the Bevilacqua La Masa Gallery along with an essay by Giorgio Trentin, and then again in 64 at the Nuova Pesa Gallery in Rome and at the Cabinet of Prints and Drawings of the Institute of Art History, University of Pisa, with an enlightening presentation by Ragghianti (catalog edited by Giorgio di Genova). Using this means of expression, perhaps less prolific but certainly not less intense than an identical creative fervour. Manzù's etchings started to gain fame during the past ten years with many exhibitions both in Italy and abroad. But above all, it is the results of this last group of magnificent aquafort-aquatint prints that solidly weld this fame to that of the Manzù drawings and sculpture.