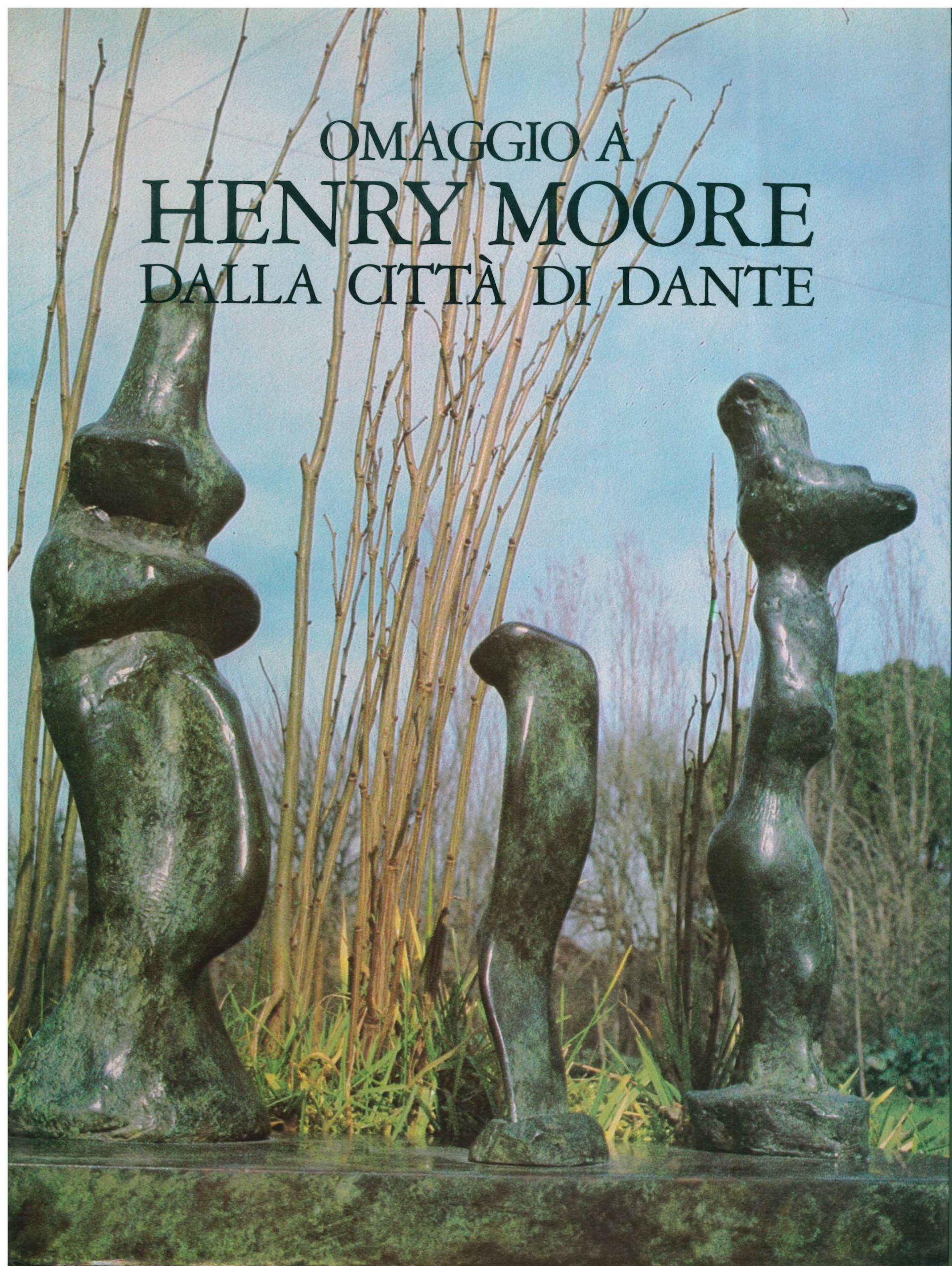 IThe intellectual bond with Italy, which was at a very close moment in Henry Moore's formation and such as to upset his creative horizon, did not exclude Ravenna. When, in 1925, at the age of twenty-seven, the English sculptor embarked on his first study trip to our Peninsula, he visited Venice and Florence, Padua and Rome, Siena and Pisa, Arezzo and Assisi and also Ravenna, in an evident intense pilgrimage to the fundamental places of art, from the mosaics of San Vitale to Giotto, from Cimabue to Masaccio, from Giovanni Pisano to Ghiberti, from Donatello to Michelangelo.

Since he was a sculptor, of course, Michelangelo of the Medici Tombs and of the Accademia, of the Florentine Cathedral and of Santa Maria sopra Minerva, touched him much more than the verses of Dante which he then could not understand, for his so total Englishness, for his assiduous frequentation of Mediterranean civilizations at the British Museum, for that sudden and unusual shock of the Aztec Chac Moal, for that sweet cadence, finally, of the language of Shakespeare that still resounds in his voice, not tarnished by the slow decay of the last years. John Russell wrote: «Henry Moore can cast his bronzes in Berlin, sculpt in Forte dei Marmi, receive commissions in all languages, but there is only one definition of him that really makes sense, 'Henry Moore, English'. A letter addressed to him like this would certainly be delivered to him. '

Yet, in the formation of the artist Moore, many things also entered, "many different feelings, a thoughtful observation, a profound research and a proof of his intimate nature", Russell warned; also the knowledge of the Divine Comedy, I would like to add, perhaps in the beautiful Oxford edition of 1894, edited, coincidentally, by a namesake of the sculptor.

The revelation of Italian art was so shocking for Henry Moore that he wrote words of fire and left indelible traces in his sketchbooks, the faithful travel companions of that unforgettable Grand Tour of his.

As for the former, here are some significant ones: «In the course of my life I think I have passed a few worse periods than the one that followed my trip to Italy in 1925-'26. Six months under the barrage of European art masterpieces had sparked a violent conflict with my previous ideals. I was dejected and unable to work. Only slowly did I manage to get out of my perplexities and the direction was towards my primitive interests. I went back to ancient Mexican art at the British Museum. A reproduction of the Chac Moal, the sculpture discovered in Chichen ltza, came before my eyes and what attracted me most was the strange lying position of the God of rain, not on his side, but on his back, with his head turned to one side.

I believe today that in this conflict, between the great suggestion exerted on me by Mexican sculpture and the love and sympathy for Italian art, two contrasting aspects of my nature are reflected, hardness and sweetness. I believe that this inner contrast can be found not only in me, but in many other artists ».

As regards, however, the sketchbooks of those six Italian months, the wealth of information is even more extensive and declarative. Giotto's studies are among the most repeated, mostly cloaked, bent figures, stuck in the monumental and sculptural aspect that most impressed Moore, but also horses and tree studies and a tasty view of the Arno, worthy of the nervous writing that we know in Turner's sketchbooks, followed, on the opposite page by some handwritten reflections, which are worth reminding the visitor of this small honorary Ravenna exhibition. These are lightning-fast quotes, annotations that follow one another as in a brain in turmoil and, in fact, are nothing but a thought expressed aloud and fixed, black and white, for one's future meditation and, unconsciously, how message to pass on. There is no lack of interruptions in thought and sentences begun and then partially canceled. There is no lack of repetitions, reiterated assertions for greater self-conviction. At the end of the sheet, Moore had begun to write down: «To me early Italian painting along with what I know…. »But then he stopped and immediately noted:« In painting, early ltalians hold (he then added an "are given") first place in my judgment », as if to prove the disturbance he was feeling. The most surprising judgment is at the center of the sheet written all in succession and without re-reading this time, «what a mecca for the art student my introduction to italian painting has been… almost as something always to my first few visits to that British Museum».

So then wrote the young Moore in 1925. When he returned to Assisi in 1967 and saw Giotto again he told me that I was accompanying him on that second visit full of emotions: "Giotto does not paint his figures, he sculpts them with drawing and color. and the masses and volumes of the bodies are more plastic than if they were carved in marble or bronze ».

On that Umbrian-Tuscan trip we were also in Arezzo and in front of Piero he hardly breathed a word. Only at the end of the visit did he tell me how much he owed, for his knowledge of the profound meaning of Piero della Francesca's art, to his great friend, art historian Kenneth Clark. With these, he had long talked about Piero, about the adamantine volumes, about the compact bodies like the shafts of columns. He then took a postcard with the detail of the Queen of Sheba adoring the Bridge. He wrote in pen, in a corner, with a steady hand and with strong and engraved characters: "Memento of Arezzo, for Giovanni from Henry, June 23rd '67", a concise and lapidary memory that has never abandoned me.

«In retrospect - he had written a few years earlier - my trip to Italy and the Mediterranean tradition had to resurface later. I did not think then that my air-raid shelter drawings (the beautiful 1940-1941 drawings made during the London bombing) could have a direct or necessary influence on my sculpture when I returned, except in things like drapery, for for example, or in the figures grouped in twos or threes, instead of isolated as was my custom. The fact is that Our Lady with the Son of Northampton and the family groups that came after, ended up having precisely those characteristics. Yet, sometimes I wonder if both these works and the drawings of the anti-aircraft shelters were not by chance my temporary solution to that conflict that had tormented me for months, after I had left Masaccio in Florence and had returned to the sphere of attraction of the sculptures. archaic and primitive of the British Museum ».

And, actually, in the composition of the contrast between primitive and classical forms, between the idol speci and the perfection of the humanistic measure lies in the sense of Moore's art which has now almost entirely crossed the century that saw it rise. «Sculpture does not need perfection to be great» said the sculptor. In the work, he has shown that he knows how to reconcile

enigmatic implications and truth, modern enlightenment and the crude materiality of which a work of sculpture is essentially made.

After the memorable exhibition at the Forte di Belvedere in Florence, in 1972, the artist's maximum achievement by his own admission, the Italian Swiss television made a documentary on the works exhibited in the stands of the Fort and inside the Palazzina del Buontalenti. Instead of entrusting it to a single operator, the managers commissioned four different operators to film the works, each according to their own perspective and each having chosen its own theme.

The complexity, and also the ambiguity, of Moore's work, the contrasts that seem to emerge from the various periods of the artist, the split between classic and romantic, between perfectibility and roughness of the plastic expression, were the qualities that were evident to those clever TV makers. Four ways of seeing Moore's art ensued, from the psychoanalytic one that investigated the themes used by the sculptor - mother-son, internal-external, bio-zoomorphic, artificial natural - to that on matter, from profiles to mass and volume. , from the whole to the particular.

It was a confirmation of how positive the vast and always original formal invention of Henry Moore remains, in the path of XNUMXth century sculpture. It was also the proof that the multiplicity of aspects in which the great works and the great ways of art manifest themselves require a plurality of ways of seeing and understanding. If, like Henry Moore, the designated artist satisfies all those ways, it means that this artist is and will remain among the highest of all times, among the few who have celebrated the dignity of man and the universal truth that distinguishes and ennobles the experience of man.