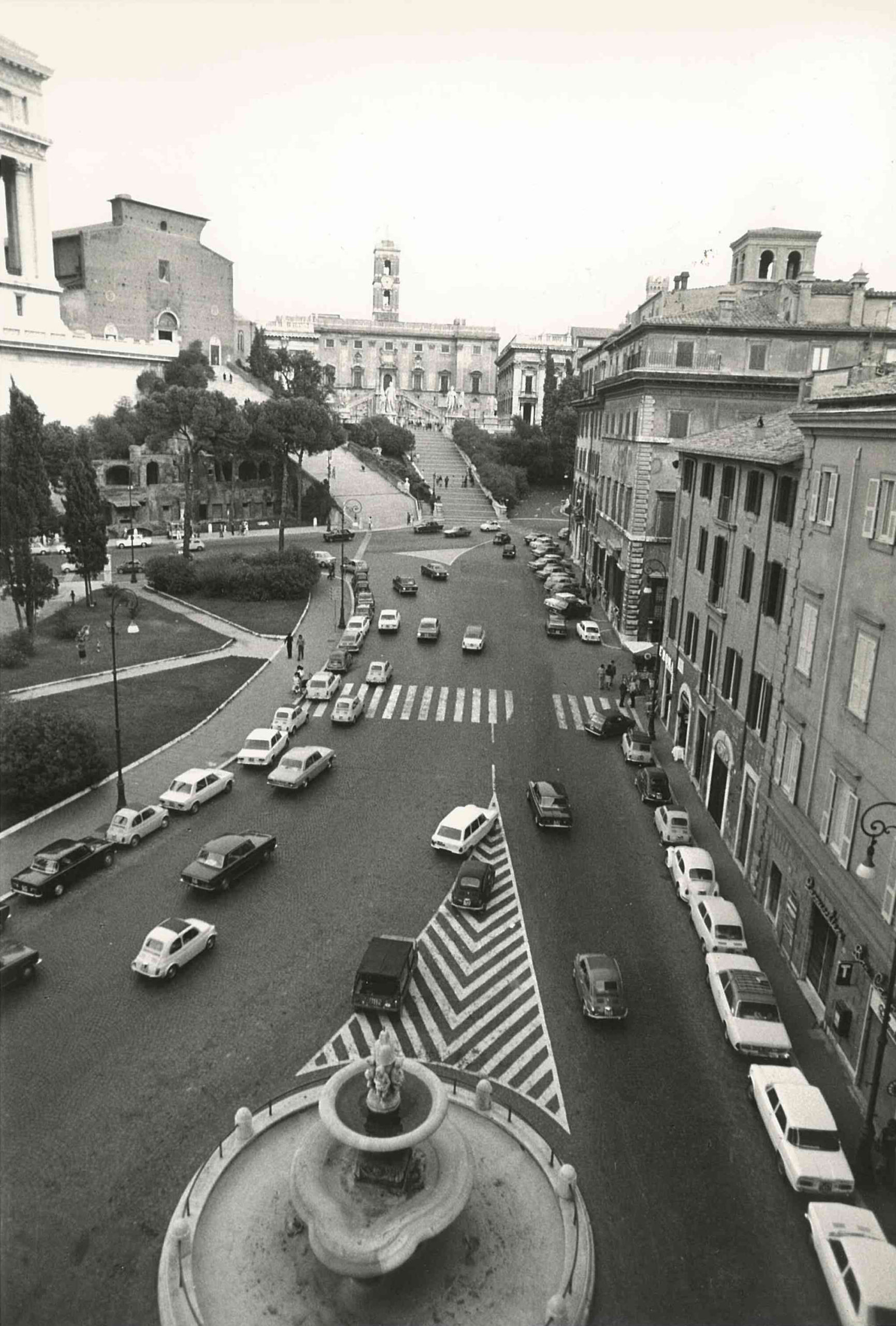 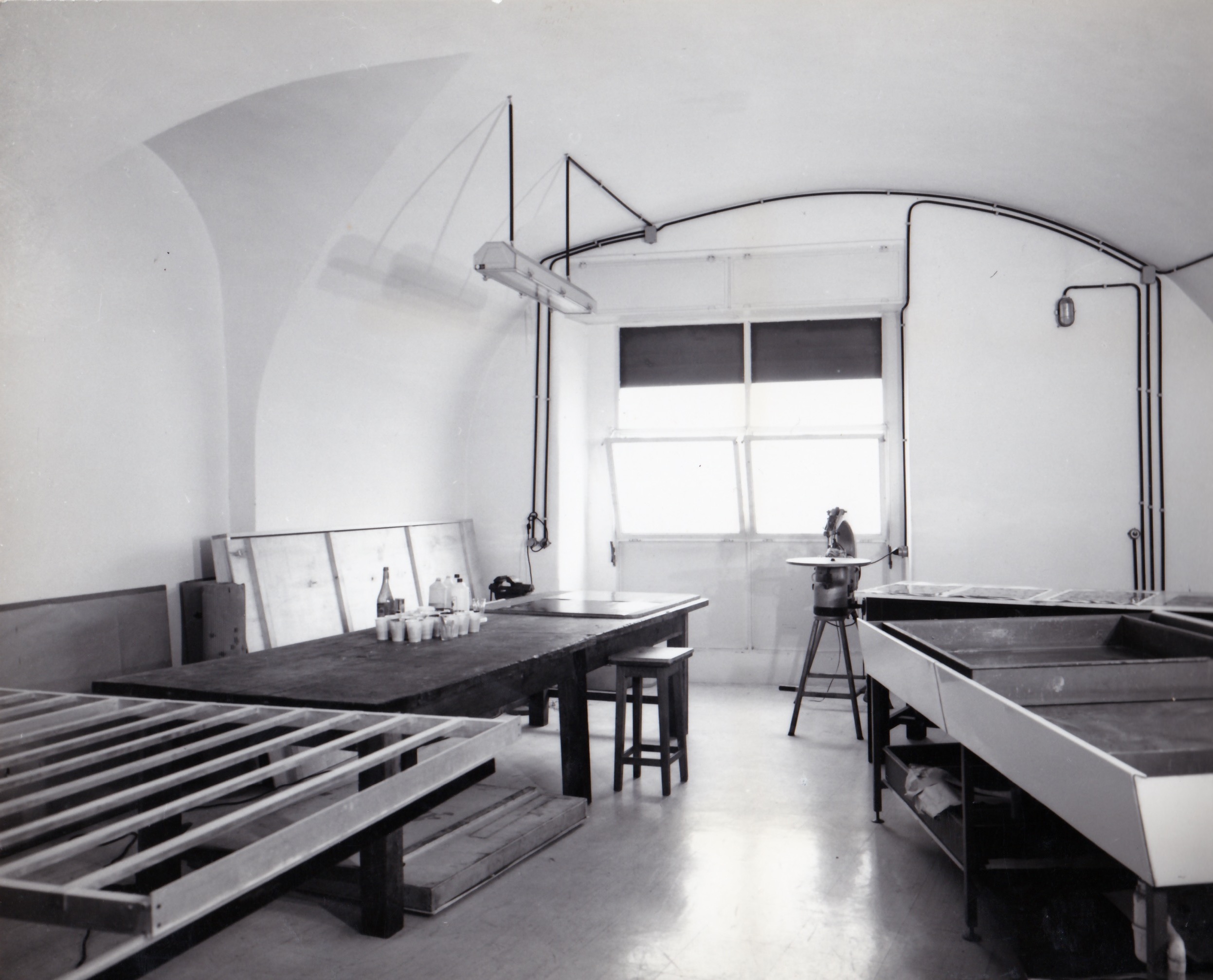 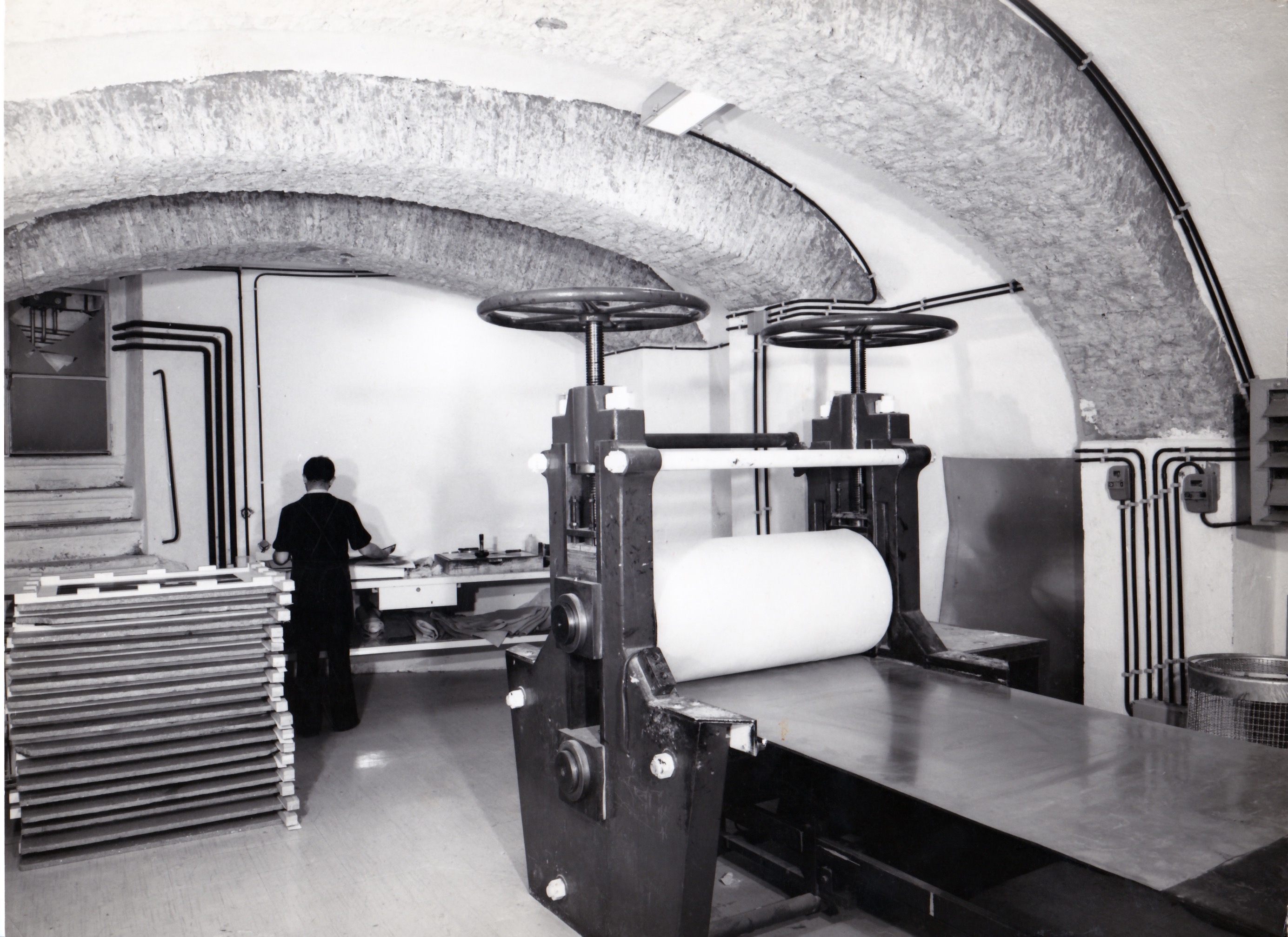 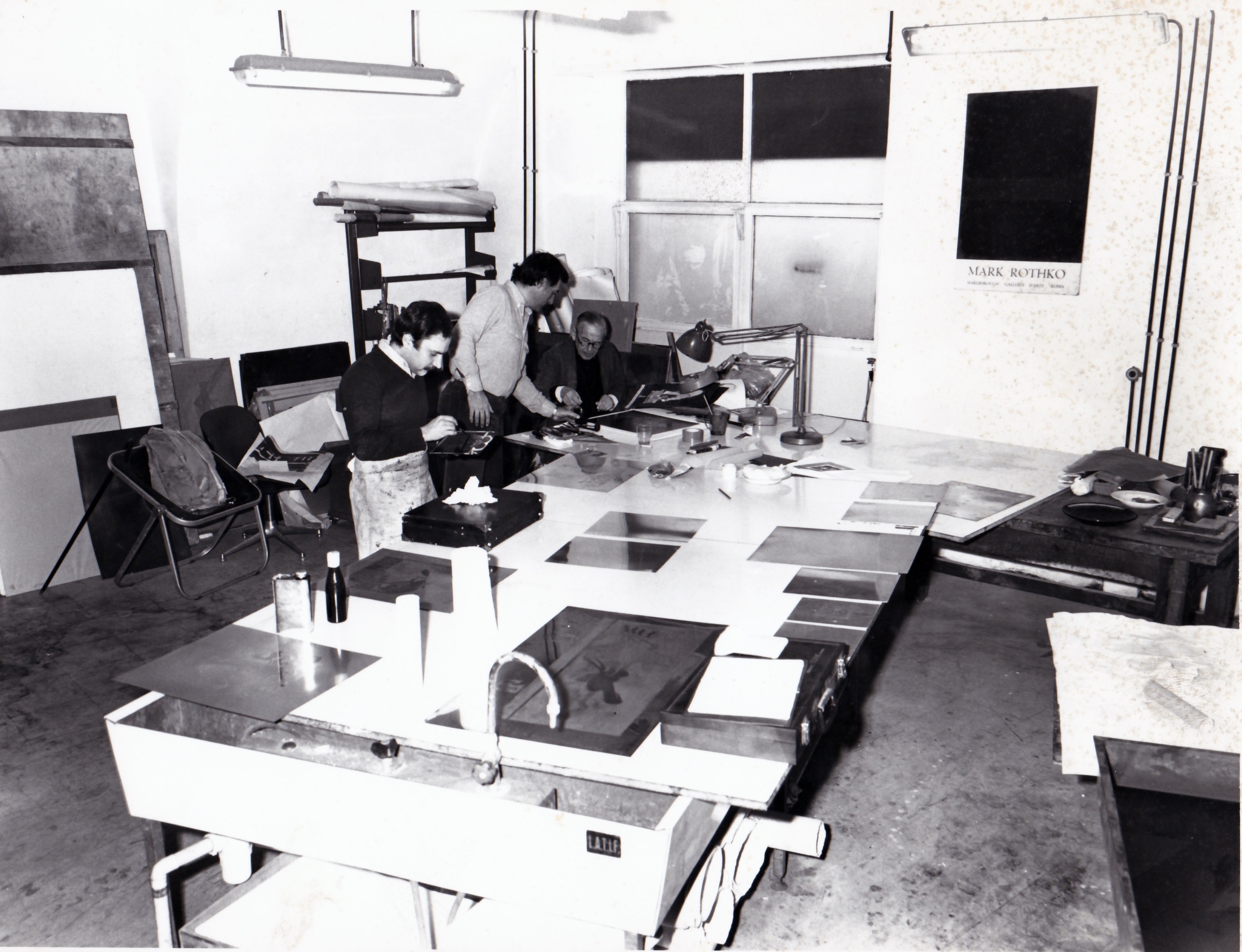 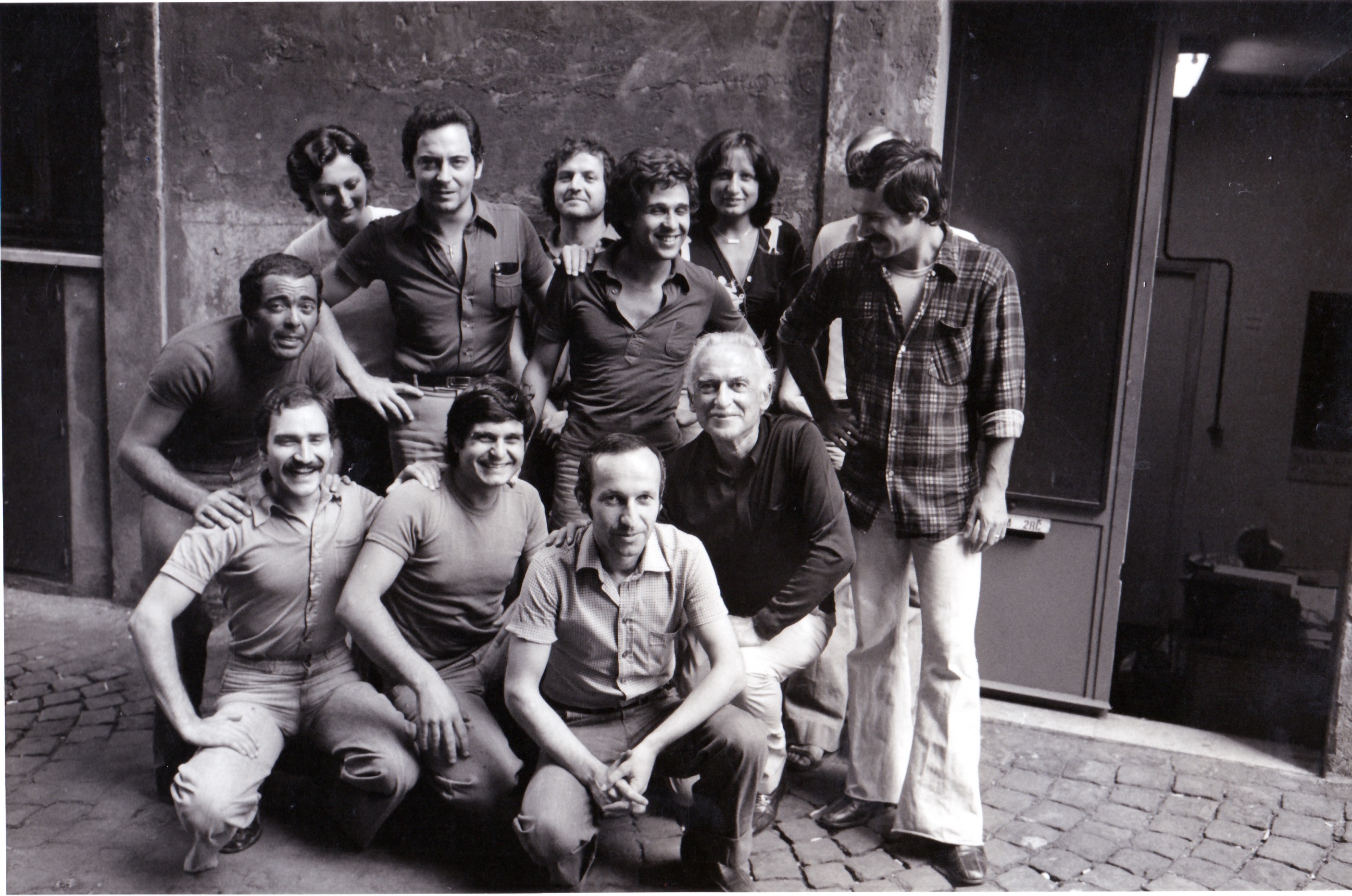 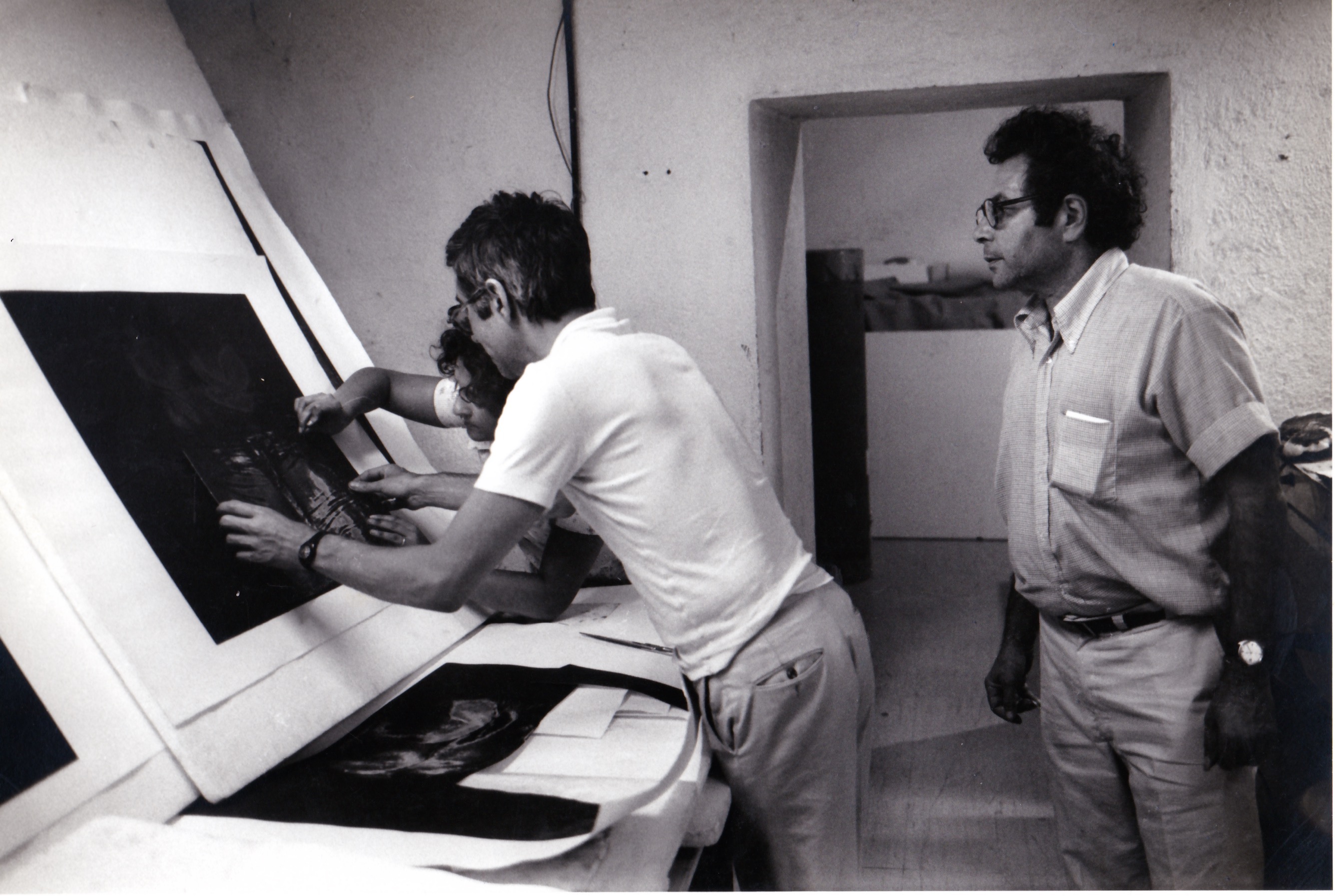 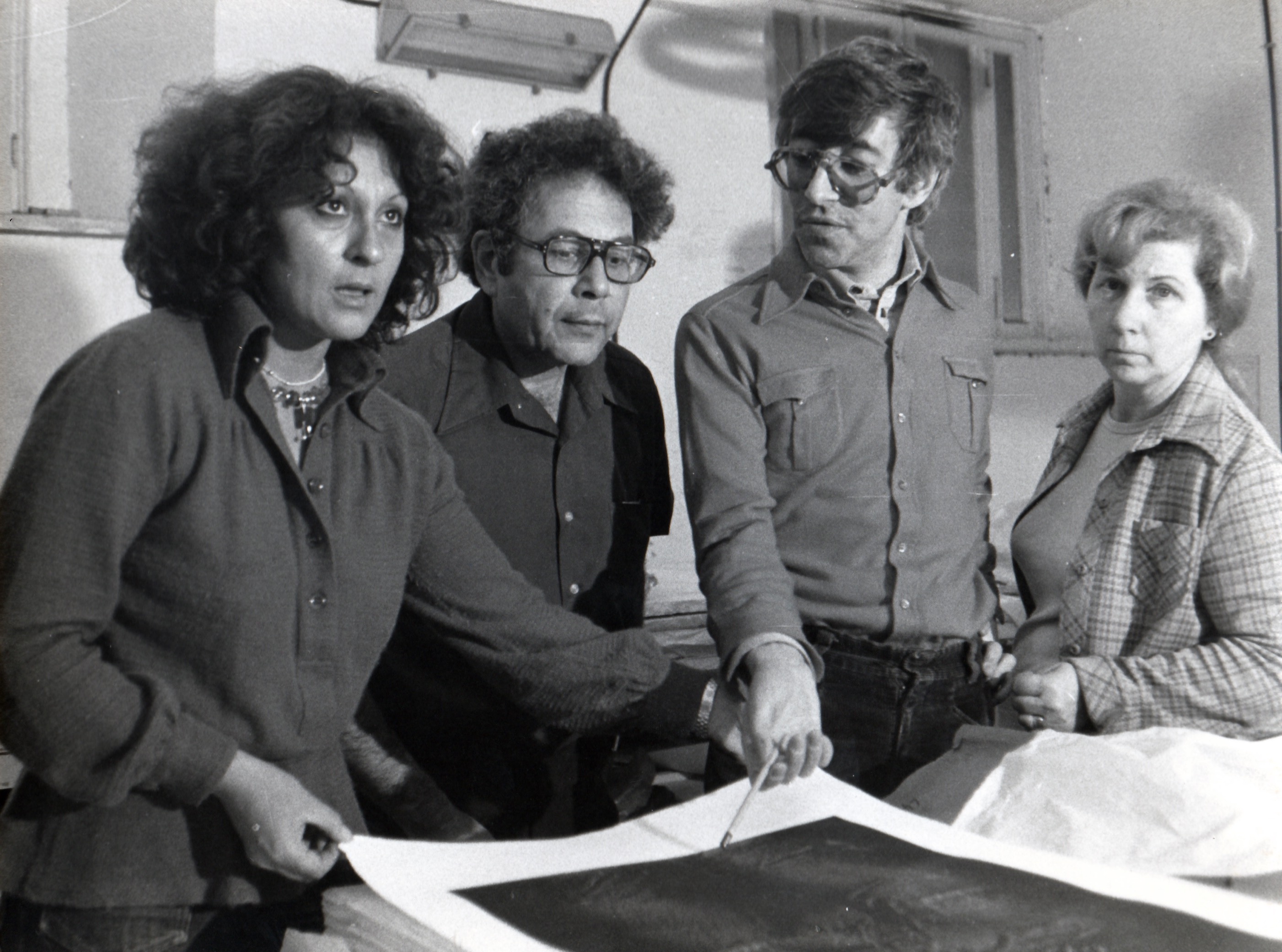 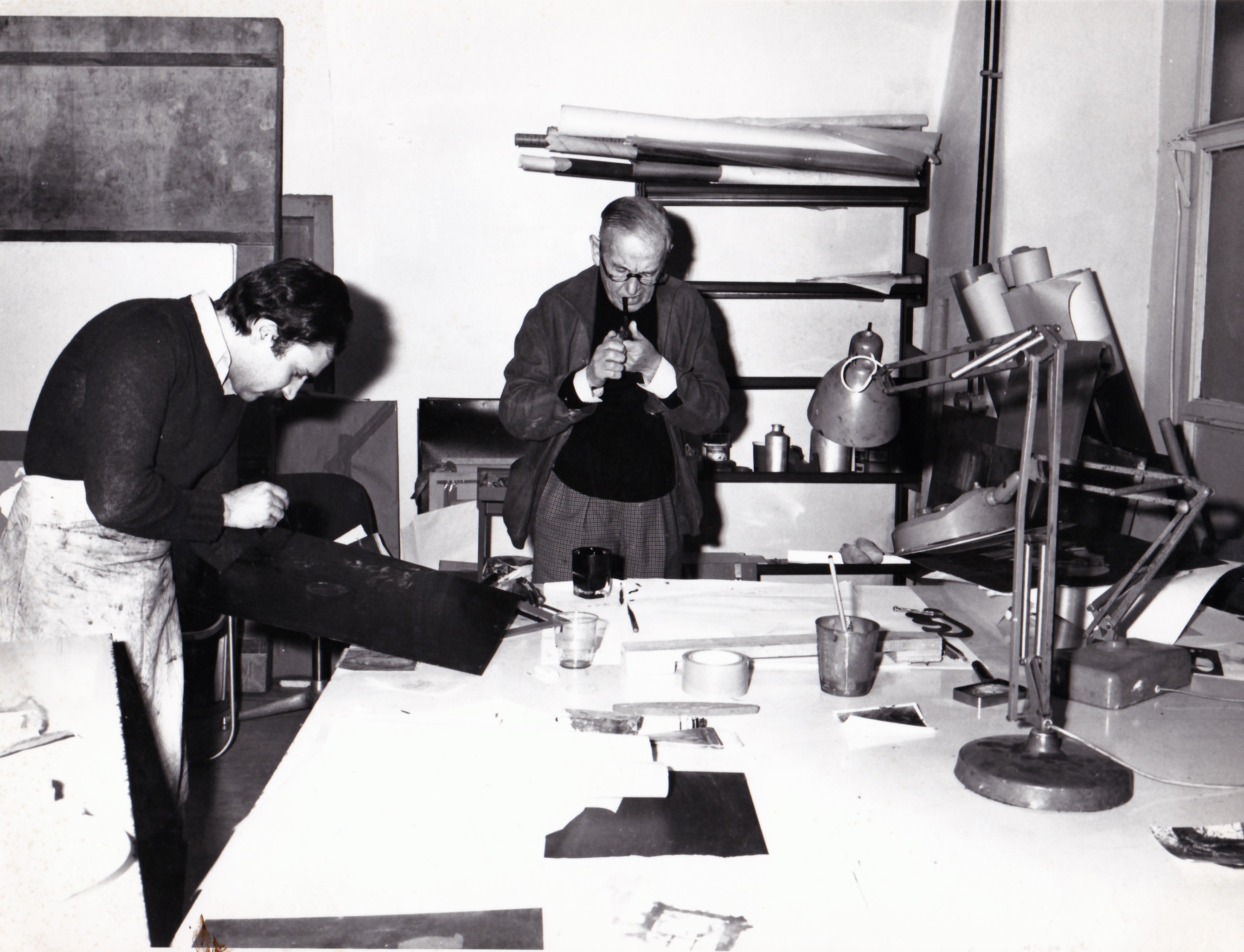 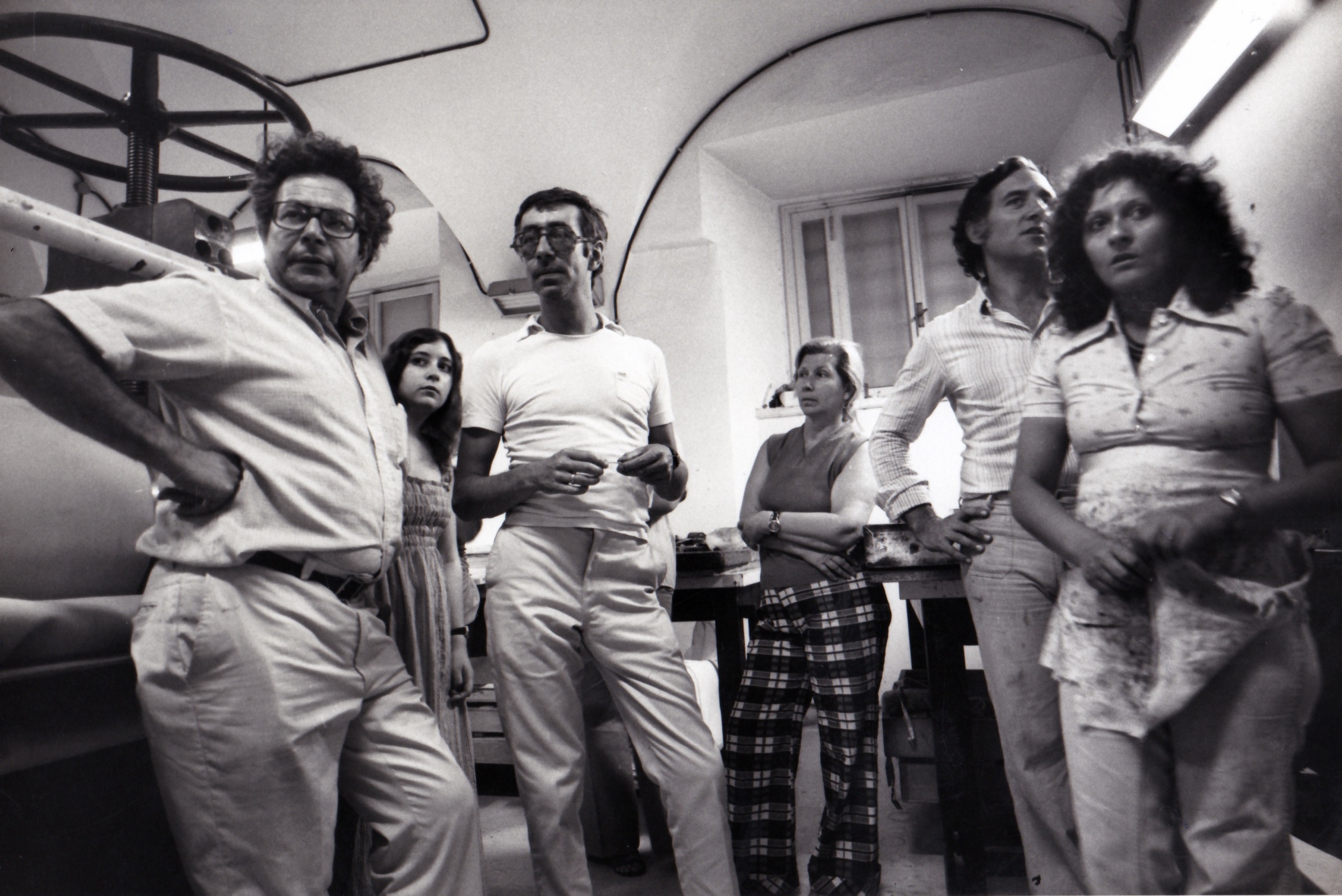 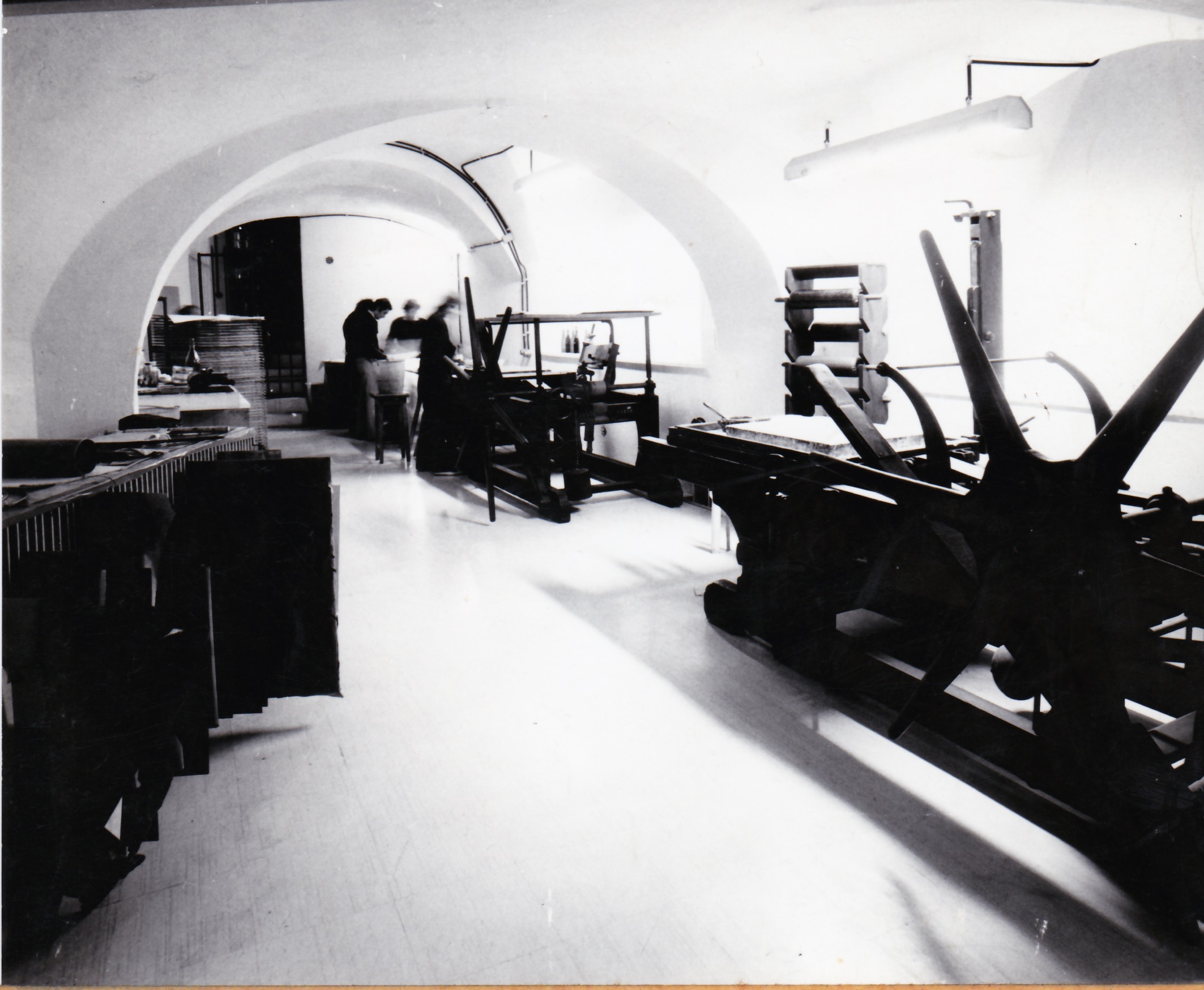 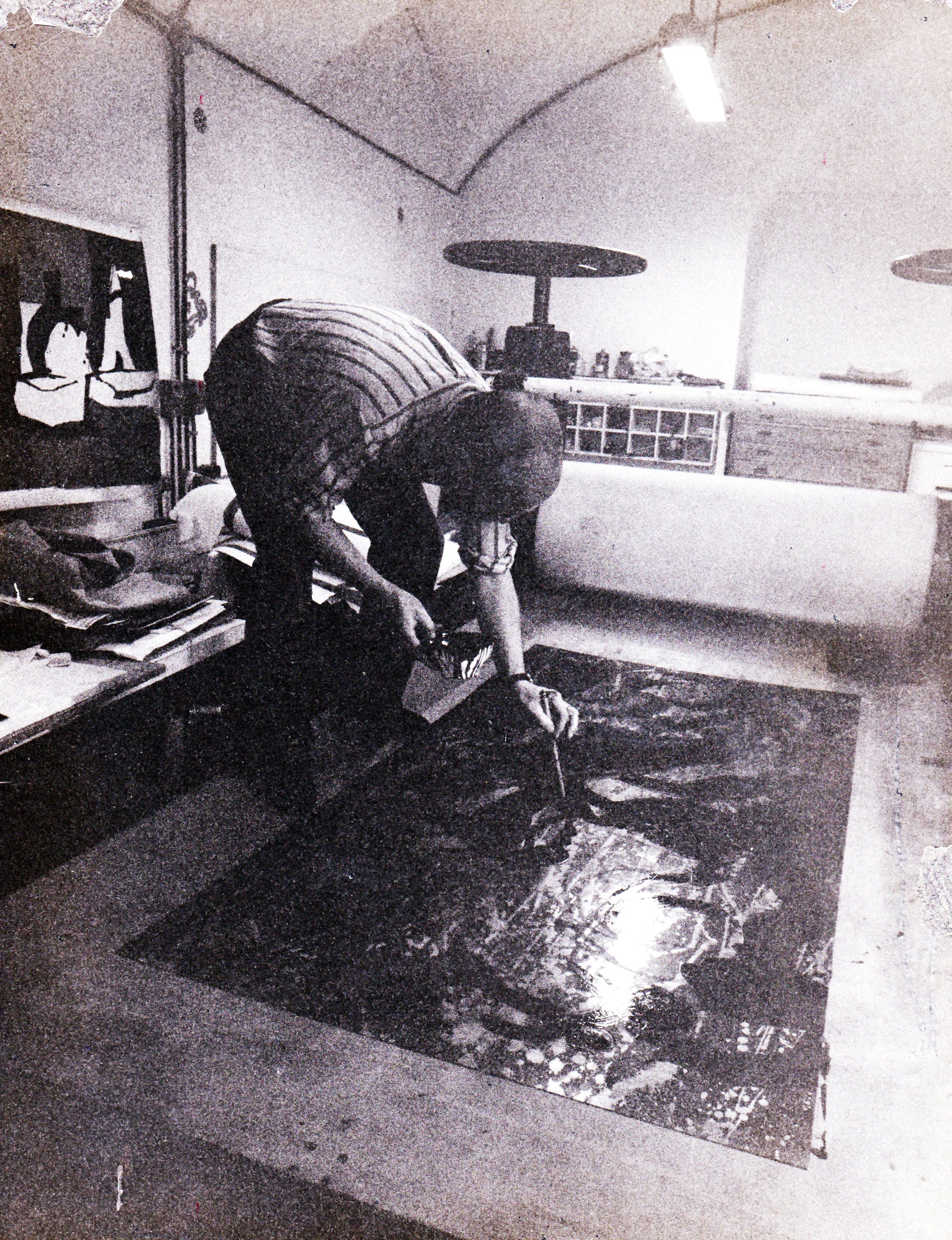 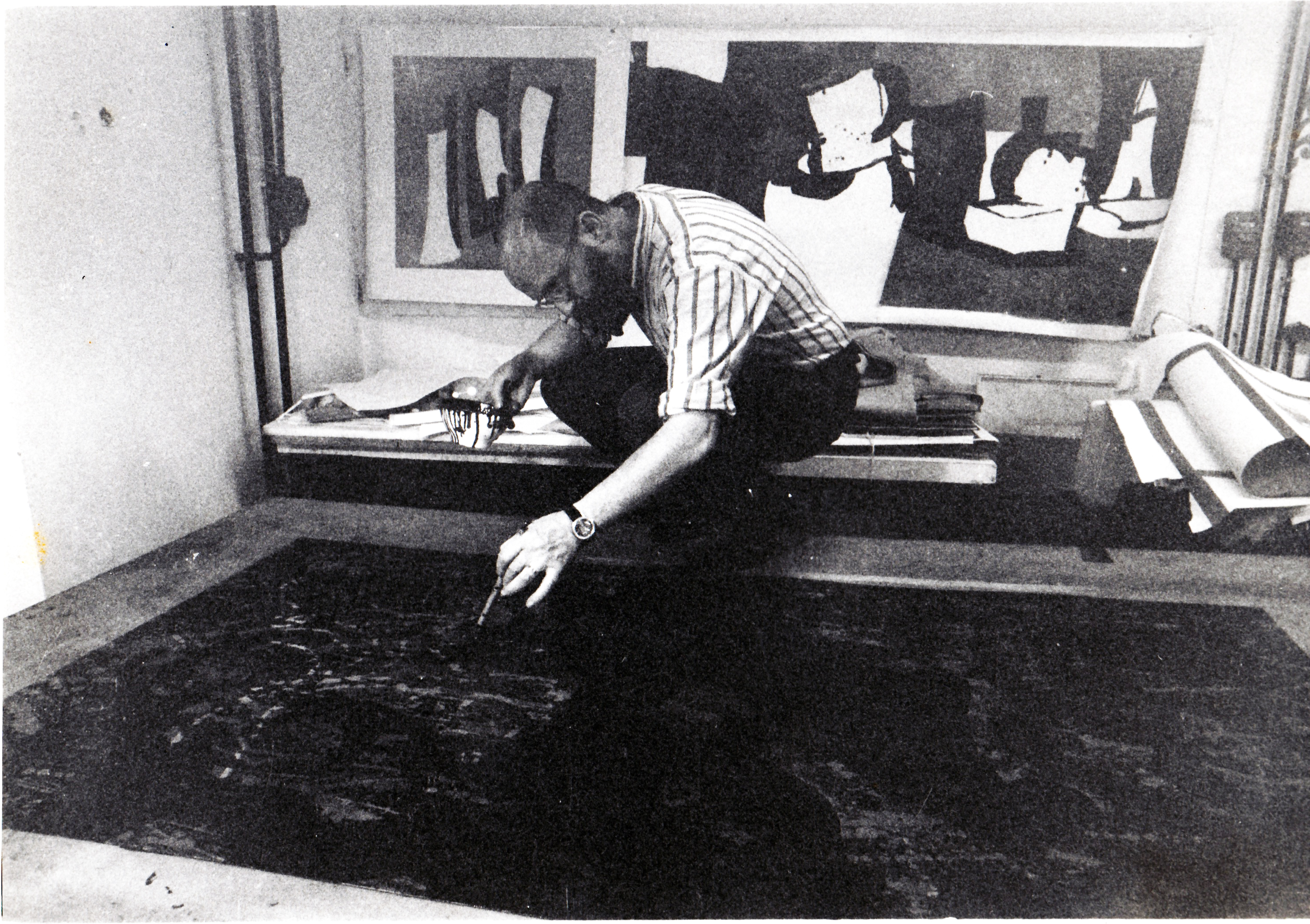 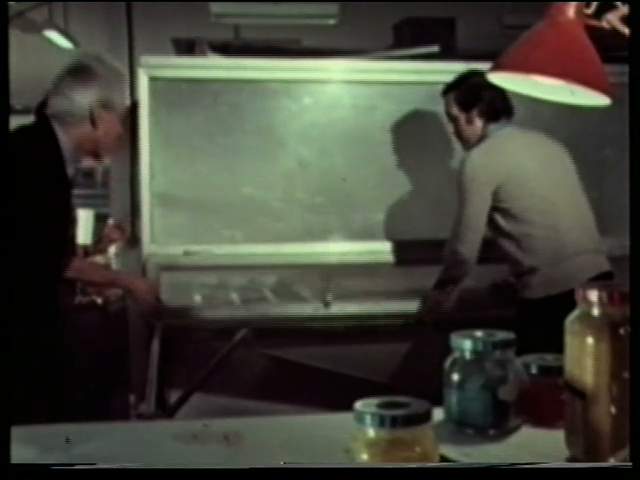 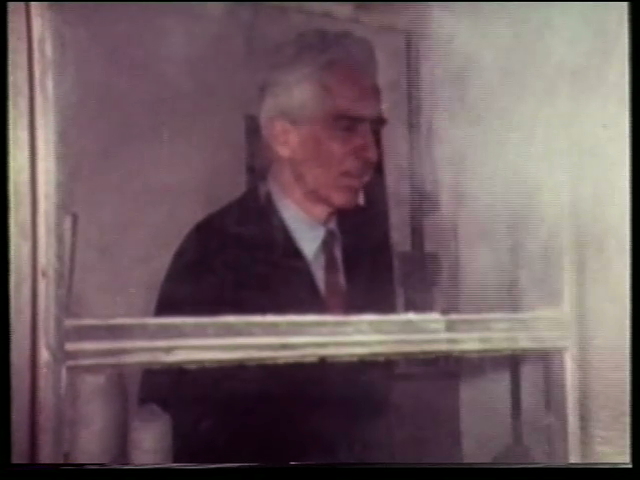 Afro in front of the Boite à Grains 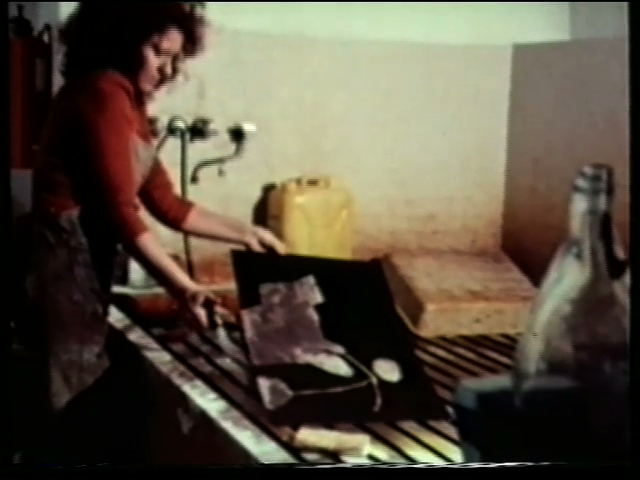 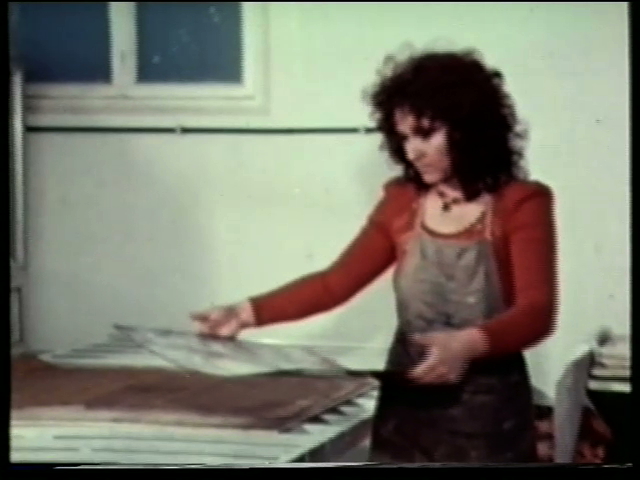 On the first months of 'XNUMX, Franco Cioppi, Eleonora's cousin, decided to devote himself to teaching, opening his new studio. He was convinced that, by leaving, I would give up this activity, knowing moreover that, after two years of construction, we were finally launching the new boat.

He was convinced that when he left I would give up this activity, since he also knew that after two years of work in the shipyard we were finally launching our new boat, and he thought that my new ship would be a great temptation at that moment!

Cioppi hadn't made much mistakes, because the desire to give up everything went through our minds, but he didn't understand how much we loved this job; to such an extent that we postponed the launch of the boat to the following year.

Eleonora, from that moment, participated in the life of the studio, totally, with all the passion and sensitivity that she had already transferred for some time but who, as an intelligent person, had always done it behind the scenes, in the most difficult moments, not making his speech.

Not for a moment did we regret the decision and, in truth, from that moment on, everything became fluid, without tension; the house was transformed into a printing house, the printing house into the house, until the settlement at Ara Coeli, "house and shop" became a single nucleus, a real discovery.

This new house on the third floor and the Stamperia on the ground floor of the Palazzo “Muti Bussi”; palace designed by Giacomo Della Porta, 1585, was the seat that, I never thought of finding, but the desire to change gear in our life, at that moment, was predominant, broadening our vision as "committed editors", for the a new perspective: new home and work spaces.

We were looking for something that didn't even exist in our imagination.

Luck wanted that the total abandonment of this building, from the end of the war, in the spaces that were not part of the noble floor, disarmed anyone who had visited it.

Another negative reason was that the 3rd floor of that building corresponded to six floors of a modern house.

The stairs to reach the apartment were heavy, and think in due time to ride a horse. This was a great handicap.

But since my prerogative has always been to find solutions, the first thing I checked was the possibility of being able to install an elevator, which then didn't take long to assemble and use it.

It was easy to follow the patterns that the type of architecture suggested to us and, aware of the great opportunity, we came to have a very rigorous conservative restoration that was appreciated by lovers of beauty.

Burri was the first to look out and admire the Piazza del Campidoglio and greet Marcus Aurelius, only after having evaluated all the spaces with his critical eye, by his nature, did he appreciate the commitment and the qualitative choice of the interventions that had been necessary to be able to manage in a rational way, such an important apartment.

He also saw for the first time the premises of the "printing house" still in full swing but understood the functionality of the spaces in which the artist would have lived the best working conditions knowing, first of all, where we had started from his first graphic work made with us.

When finished, it was an immense pleasure to discover how much the whole complex lent itself to being inhabited and experienced as a single settlement. Only the stairs divided the continuity of our "house-shop."

Edoardo Chillida was a guest with us at Ara Coeli, when the Stamperia was still in Via Madonna di Fatima. Several times he paused to look from the large living room window that overlooked the Ara Coeli and Michelangelo's square at the Campidoglio with more and more curiosity.

It is true because we ourselves noticed from that window that our eyes were looking at the eyes of Marcus Aurelius, on his horse, in the center of the square and he placed us at the ideal reading center of the whole square. The perspective highlighted and confirmed what Michelangelo had wanted to change: the "perspective plan".

In so doing, he optically removed the façade of the central building, which was very looming, giving the square its logical harmony, and a Michelangelo-like architectural elegance, which had also disoriented Chillida.

The printing house, thus was born, with us present day and night and we took care of every detail as there was no water, electricity or sewage system. For the latter we were forced to make extensive surveys until we discovered one fine day, late in the evening that our drains ended up in the "Cloaca Maxima", an example of urban planning and civilization that is inreplicable for architectural elegance, for its simplicity of maintenance and a foresaw a future expansion for a great, very large city.

For months I had already started the construction of the two chalcographic presses based on my project at the “Meccanica Romana” in Ostia, a very solid and important company in the manufacture of railway wagons, with a Trieste engineer very interested in helping young creatives. I mention it because I will never stop thanking him for the help and professionalism he made available to us. In these two cars not a single mistake was made !!

When we started the move, we knew exactly where to put each machine every object because that space, in addition to having designed it in the smallest details, had been lived for months also thinking about functionality and operation, avoiding unnecessary waste of time.

I can say that at that time we could not have done better with a printing house that could cover all sectors of printing: chalcography, lithography, screen printing in formats never thought of before, nor created such innovative techniques necessary for the contemporary world.