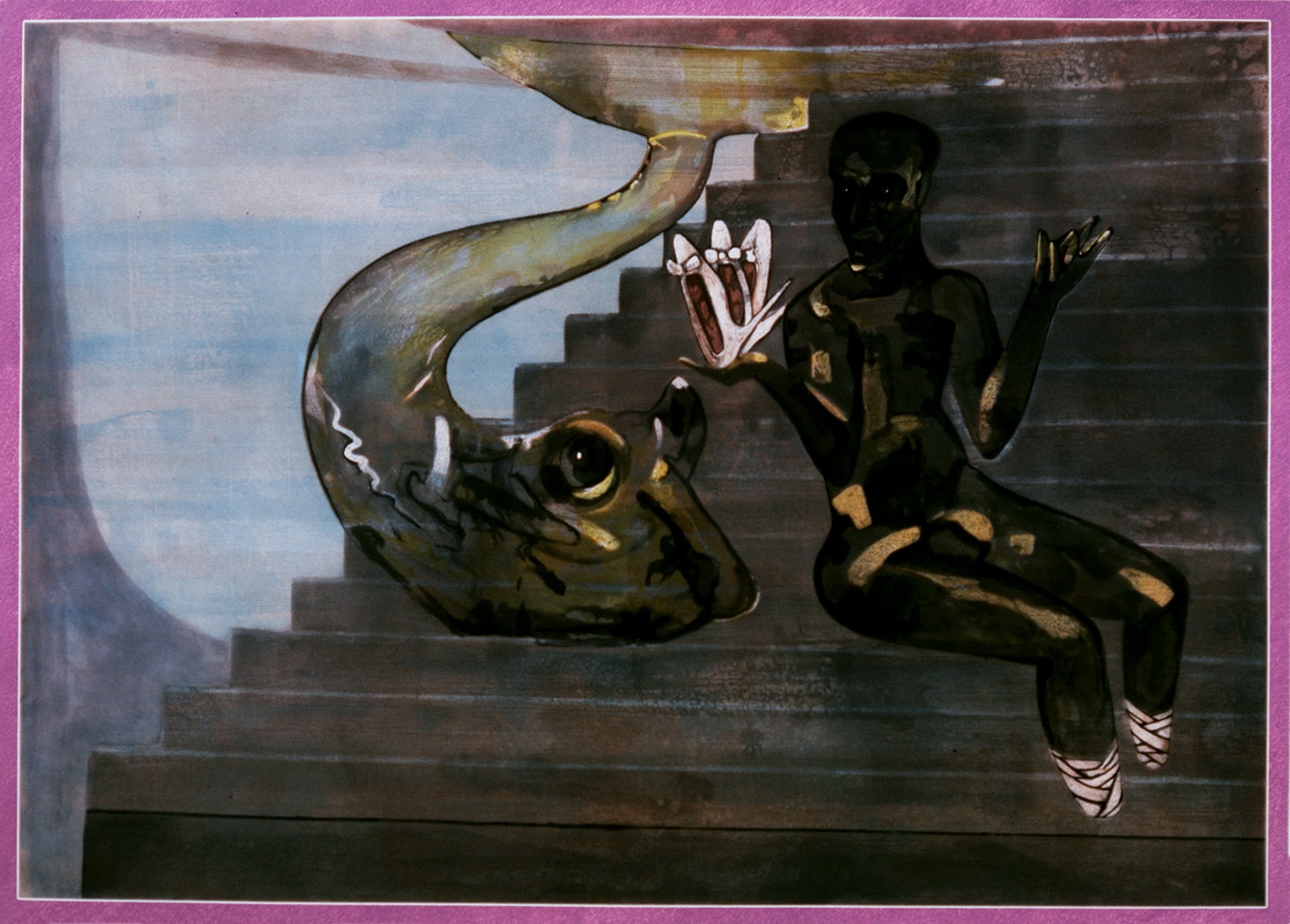 Francesco Clemente had already lived in New York for some time, his visits to Rome were always too short to be able to devote the necessary time to a first experience with our studio.

He thought he could make lithographs on his own, working the plates in his New York studio and then later mailing them to us for printing. The project did not interest me and I did nothing to help it; I just sent all the necessary materials, and waited ...

Subsequently, it was the German publisher Schelmann who asked us to reconnect with Clemente to make a large engraving. The artist wanted to do it with us. We were happy with this opportunity, because in the meantime we had opened the printing house in New York, so close to Francesco's studio that we could walk there. A unique opportunity that we took advantage of immediately.

The look of Francesco Clemente is, in my opinion, the most evident thing of that artist. Not only in a physical sense, but even more in a poetic, philosophical and transcendental sense. His characters, the elements that are part of his countless compositions pass from his gaze to a superior one that scrutinizes him from the inside and lets his imagination fly in a timeless space, in places where it does not matter who you are, beyond the Stingray.

The day I saw Francesco Clemente use the watercolor technique in his studio, I realized with what concreteness and determination he controlled the birth of his work. There I decided where to start.

The first major work was an etching, aquatint and drypoint for the publisher Schelmann. Probably the choice of the subject and the size imposed on us, initially, a research that we immediately exploited, realizing under the pretext of knowing each other, two small, fresh aquatints, two of his portraits.

Being in New York, so close, practically allowed us to have no timetables. Francesco could show up at any time, we often worked even at night, arriving destroyed in the morning.

The birth of "Semen" was a shocking and unrepeatable experience, with a result so positive that it nullified the negative aspects that we were forced to undergo during the initial technical journey.

I state that the equipment installed in New York, in the studio, started from Italy, designed in every detail to adapt to the space which, at the same time, had to be a printing house, a place of representation, a show room, a home for us and at the same time a space. in order to host an artist.

Movable walls, Venetian blinds and plants that Eleonora claimed to be present, acted as curtains.

When working on large slabs, all the equipment expanded taking up the maximum of the useful space, often invading areas intended for other things with acid tanks larger than two meters by one.

The tanks, pushed on appropriate wheels, could disappear after use to make room for subsequent operations.

That famous night, it was about one in the morning, after having treated the plates with more acid etchings (iron perchloride), we decided with Francesco to change the technique and proceed with a new aquatint to subsequently treat it with a brush.

This decision led us to put the acid tank back in its place, pushing it from the outside to let it enter under the fixed tank.

Everything happened in an instant. One of the four wheels that supported the tub gave way under our pressure and, without realizing it, the very heavy liquid accumulated towards the part that was giving way and, as in a dream, we were all three helpless in front of what was happening.

We were surrounded by a poisonous amalgam, helpless and stunned at the same time. Where did you have to start? Could we get out of that nightmare?

Perhaps the exhaustion made us burst into a childish laugh that allowed us to react unconsciously. First, we put Francesco in a position to gain the door, thus removing him from our embarrassment.

Finally, three hours after the disaster, we were immersed in the bathtub, with two nice glasses of vodka, certain that we had passed an extremely grueling test.

We had the feeling of having paid very little, in relation to the violence suffered in those few moments, and of being able to lull ourselves into the warmth and unconsciousness that slowly advanced, leading us to a deep sleep in our relaxing bed.

At seven in the morning, the insistent bell at the door called us back from unconsciousness and took us into an alarming reality!

After opening the front door and seeing the young architect of the mega "Architecture Studio" downstairs, with his face contracted and hands full of iron perchloride, we were paralyzed, thinking of the consequences that could be activated from that moment.

"What is this ...?" was the question, "a salt" was my answer, and it was not a lie, as in chemistry iron perchloride is considered a heavy salt, and I continued: "actually, we had a little problem tonight but, before to talk about it, I would like to understand how this salt arrived in your studio, could I come and see? ”.

The very heavy and damned acid had slipped along the heating pipes and had fallen downstairs, right on the white marble, the base and support of the most advanced and sophisticated computer that could be thought of for an architectural firm at that time, touching it. a few centimeters.