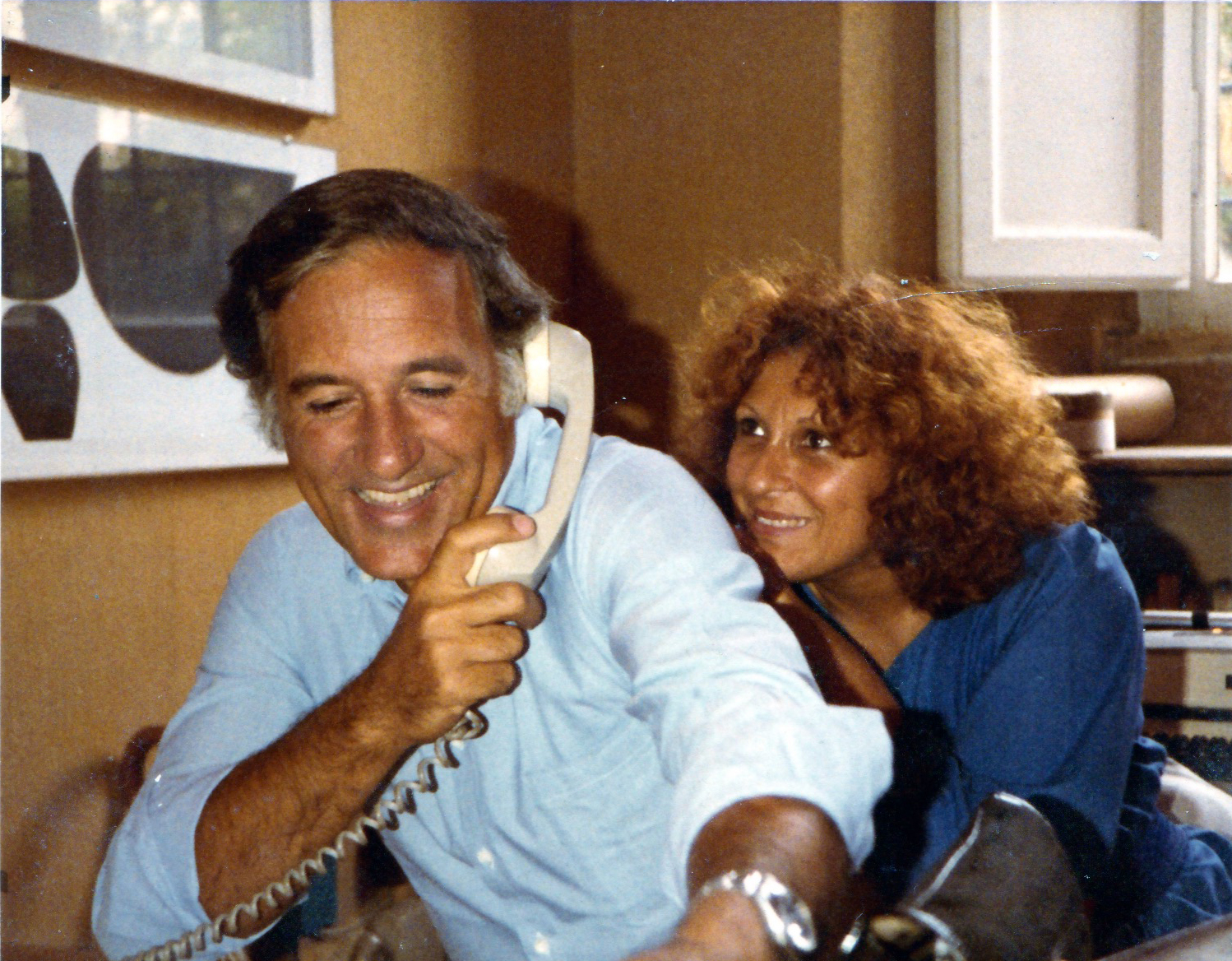 In 1959 Valter and Eleonora Rossi, two young people from the Brera Academy, founded 2RC Stamperia d'Arte with their cousin Franco Cioppi in Rome with the conviction that graphics are a real artistic genre, like painting and sculpture and not an extension of the latter: the goal is to create a technical laboratory that develops the disparate techniques of graphics in order to allow artists to work freely as with other media.

In the early 60s Valter and Eleonora Rossi printed their first graphic folder in Rome: a series of aquatints and etchings made by Fontana. The folder will allow him to win the first prize for graphics in Tokyo.

Lucio Fontana together with Alberto Burri represented one of the most significant voices of the postwar period. His approach to matter, the cuts and holes made on the canvas represented the experiments on new spatial concepts. Bringing them back into engraving had to become proof that the printing techniques preserved on the one hand the tactility of the surface peculiar to the paper medium, while keeping alive the articulated texture of Fontana's works.

Thus began the activity of 2RC which from the very beginning reveals a marked propensity to collaborate with artists who move on the most advanced researches. Between 1962 and 1969 they print with 2RC: Alberto Burri, Giò Pomodoro, Giuseppe Capogrossi, Giulio Turcato, Giuseppe Santomaso, Piero Dorazio, Pietro Consagra, Achille Perilli, Beverly Pepper, Adolph Gottlieb and Afro.

The profound respect for art, a need for adventure, pictorial and sculptural knowledge and the ability to grasp the distinctive touch of each artist, push the Rossi, with great professional accuracy, to the desire to graphically produce the processes and contents expressed by contemporary artists and lead them to courageous experimentation.

Vittorio Rubiu about the engravings of Alberto Burri, with whom the Rossi printed from '62 to '83, speaks of “… engravings closer to painting, almost to be exchanged with it…”; the Reds restore the effect of burnt plastic and the variations of white through the use of acetate, transparent and colorless plastic, while they bring the materiality of the Cretti to the paper through an elaborate and unconventional system of etching and aquatint.

1969 - UNESCO folder: the years of consolidation

The large dimension becomes a place of action, an accessible surface ready to unleash deceptions and continuous tests, which the artist resolves by putting himself back into the hands and wisdom of the engraver and also the place of the adversity of color, of which Eleonora Rossi brings a great sensitivity, tonal passages that the Reds love to find in their lives, because for the Reds, working is a condition of love.

Victor Pasmore, an artist recommended to Valter Rossi by Burri on the occasion of the Unesco portfolio, worked with 2RC continuously, from the end of the 60s until his death in 1998.

Rome became in those years a favorite stop for Pasmore, when from Malta, where he had settled since the late 60s, he returned to London to take up his position as Director of the Urban Plan. He loved to stay there and produce some works with the Reds, reproducing his biological forms, from the lights of the Mediterranean Sea that so much Eleonora Rossi knew how to guess and create.

Graham Sutherland confronts the Reds with the problem of aquatint: a solitary artist, he shares with the couple his search for a sign burned by time. He made in his studio in Menton in France in 1977 “Bees”, api series, and in 1979 “Le bestiaire”, inspired by the tale of Apollinaire. The graphic work carried out in the early 80s by Henry Moore is summarized by the words of Giulio Carlo Argan, who observes the sculptor's ability to be able to give with a single graphic sign the limit of the natural horizon and the sculptural one of the human figure. The difficulty of transferring the plastic work on a two-dimensional surface is not a limit to the creation for the master engravers, but an inspiration for a spatial research that takes place in the sign and in the color. Moore's enthusiasm would have been such that he decided to lend the Rossi five large sculptures on the occasion of the inauguration of the new printing house, Vigna Antoniniana Stamperia d'Arte in Rome in the new headquarters at the Baths of Caracalla.

At the end of the 80s, the Reds saw one of the greatest wishes of their career come true: Pierre Levé, the then director of the Marlborough Gallery in New York, proposed that he make an engraving with Francis Bacon. The English artist, a character as lovable as he is tiring and complex, fails to start from the blank sheet. Bacon shuns graphics convinced of the impracticability of the medium, then comes the orange and it is the shock.

By superimposing the plates, Eleonora Rossi manages to give life to a color that the English artist thought was impossible in graphics: a specific orange, intense and infinite. It is the beginning of a series of etchings abruptly interrupted by the artist's death.

This experience is for the Reds yet another lesson: graphics must not be worked on immediately; it does not have to solve the problems of distributing an image, but it is a means capable of expanding the need for experimentation, made up of mutual exchange of understanding and generosity between the artist and the printer.

The 70s were gray years in Italy, the collaboration with overseas artists and the political difficulties of the time led the Rossi, in 1979, to open a printing house in New York, which was the beginning of a profitable work phase. .

The Rossi's desire is to establish a solid dialogue with the American artists with whom they had been working for years, giving an overseas reference, to create the print vouchers then pulled in Italy, and to establish themselves with an international presence.

There are many experiences and episodes of those years: the calligraphic expressionism of Pierre Alechinsky, the first to inaugurate the press in New York; the numerous trips to California and the itinerant print shop reduced to the essentials for Sam Francis; George Segal in 1987 in New York realizes the series of six graphic works “Portraits”; Helen Frankenthaler, Nancy Graves and Julian Schnabel.

The Rossi's decision to open the printing house in New York coincides with the appearance in the Big Apple of some young Italian artists gathered around the Transavantgarde movement and led by the critic Achille Bonito Oliva: they are Francesco Clemente and Enzo Cucchi. The collaboration with the Transavan-guard could not but begin with an interesting conversation with Achille Bonito Oliva, who immediately identifies the intrinsic nature of the graphic medium: the two-way relationship between the artist and the engraver to which the artist delivers the sign.

The assimilation capacity of Francesco Clemente's technique distinguishes him from the beginning from other artists. He combines the fluid line of engraving with the fine watercolors of aquatint, reproducing the brightness of his paintings on paper. In those years Francesco Clemente introduces Julian Schnabel to the Rossi, together they create a series of large-format engravings: each engraving is like a happening, it becomes the implementation of an instinct and the sign a paw.

“Each artist brought something and they all enjoyed it”, says calmly Valter Rossi, when retracing the history of 2RC. It tells in enthusiastic tones the open and collaborative attitude of the printing house that has been able to adapt to the needs of artists and transform itself from time to time. Today the printing house resides on the Cassia awaiting a definitive and emblematic location, already defined. The work of graphics is incessant and, retracing the teachings acquired in the past, it becomes history and baggage of mutual exchange between the artists of the past and the artists of today.

In April 2007, at the Arnaldo Pomodoro Foundation in Milan, the retrospective exhibition curated by Prof. Achille Bonito Oliva was inaugurated "Double dream of art - 2RC between artist and creator" in which 400 graphic works of 2RC were presented. This exhibition date, reduced to 176 large works, in 2008, was presented at the Museum of the Russian Academy of Art in Moscow and at the Academy of Fine Arts in St. Petersburg;

On January 18, 2009 the “traveling exhibition” was inaugurated at the CAFA museum, Central Academy of Fine Arts in Beijing, hosted by important museums of Chinese academies such as: the Luxun Art Academy Museum in Shenyang and the Sichuan Fine Art Institute Museum in Chongqing; in South Korea, at the MOA - Museum of Art of the Seoul National University, where on that occasion the exhibition was inaugurated by our President of the Republic Giorgio Napolitano; continued to travel to Indonesia in Jakarta, Bandung and Yojakarta; Mexico, at the Museo de la Estampa in Mexico City, Querataro, Morelia and Toluca. Returning to Italy in 2013.

The change of course occurs when his daughter Simona, who had been studying Chinese in Beijing for some years, meets the Director Prof. Tan Ping of the Central Academy of Beijing, invites him to Italy to see the exhibition in Milan. His appreciation is such that he offers the Reds a collaboration with his Academy. It was decided to bring the exhibition to the CAFA Museum in Beijing and be able to inaugurate it in January 2009.

On that date the traveling exhibition was presented and the donation by 2RC of a large "Decebalo" intaglio press, with all the necessary equipment for the 2RCCAFA engraving department, in addition to benefiting from the teaching of the Rossi on techniques, on the applications, from them, the possibility to work with important artists, including Ding Yi and Liu Ye, and see the results both of quality and economic, for the department itself, with a collaboration that progressively increased, reaching to produce more than thirty editions, working with them only two months a year. Lui Ye after having worked with the Reds in 2010 and made two splendid engravings, the following year when the Reds arrive in Beijing, he showed him a small watercolor of a Pinocchio saying: "I'd like to do it in engraving ... great, it's Italian, I thought it for you "

For Zhang Xiaogang the Reds, once again, organize a small printing house in his studio because the artist preferred not to go to the Academy. And from there came two series of three and nine small engravings for which he.

The proposal of Senator Giovanni Pieraccini for a collaboration project with the GAMC Museum of Modern Art in Viareggio in 2009 led the Rossi to evaluate the possibility that what had happened in China could be implemented in such a short time.

In 2013 he was assigned a space, suitable for the printing house, adjacent to the GAMC. The same will take the name of the International Center of Graphic Art 2RCGAMC.

At the end of 2014 and beginning of 2015 the first Master in Publishing, Management and in collaboration with the Academy of Florence takes place. In which Valter and Elonora Rossi teach their techniques to the students. Valter Rossi thus discovers his true passion for teaching.

From China, Chinese technicians are invited by the Academy to do workshops in Xylography.

At the end of the Master, three participating students won a scholarship donated by the Nando and Elsa Peretti Foundation and were able to continue their apprenticeship with the Rossi.

For Eleonora and Valter the path continues ......