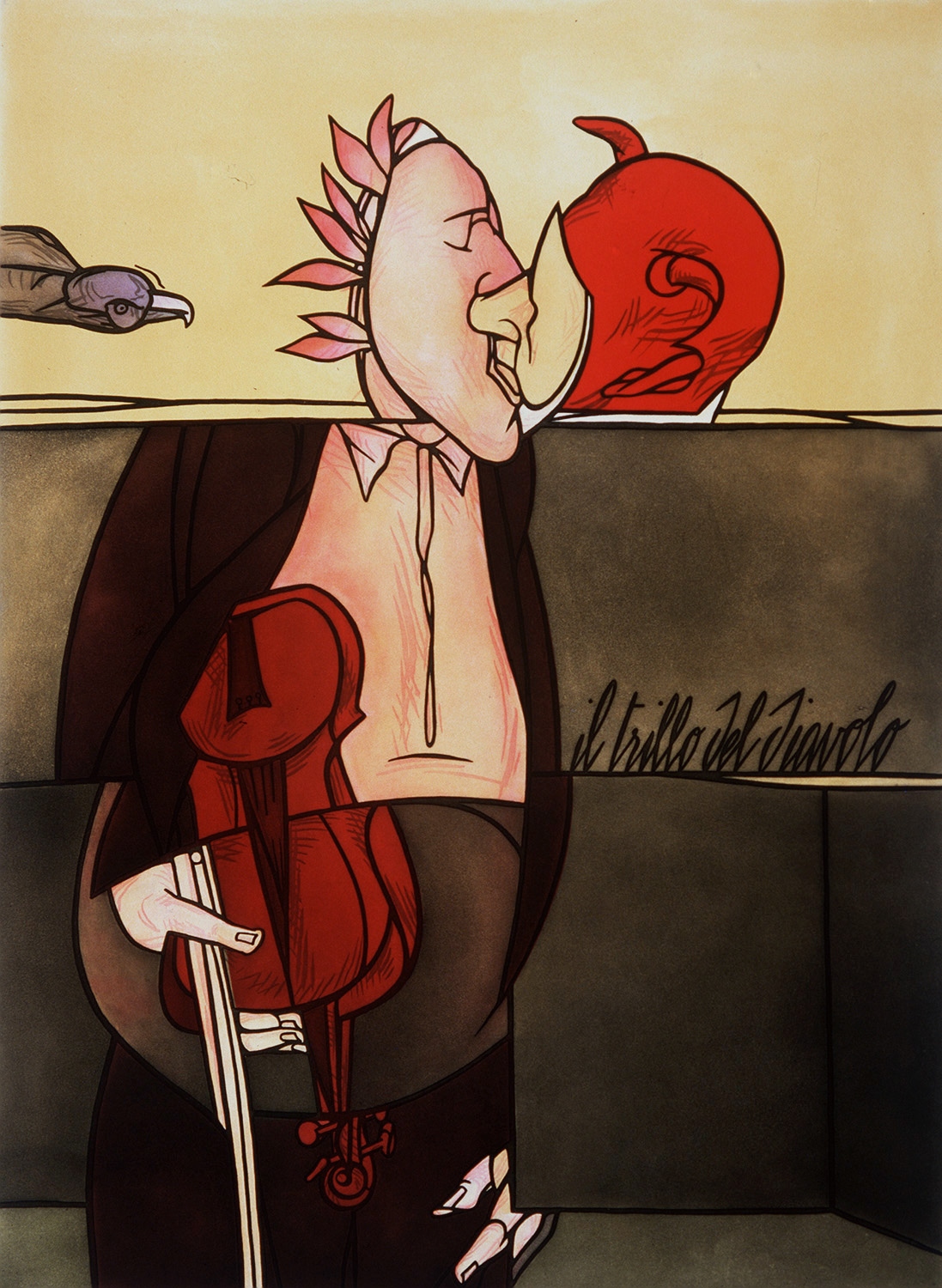 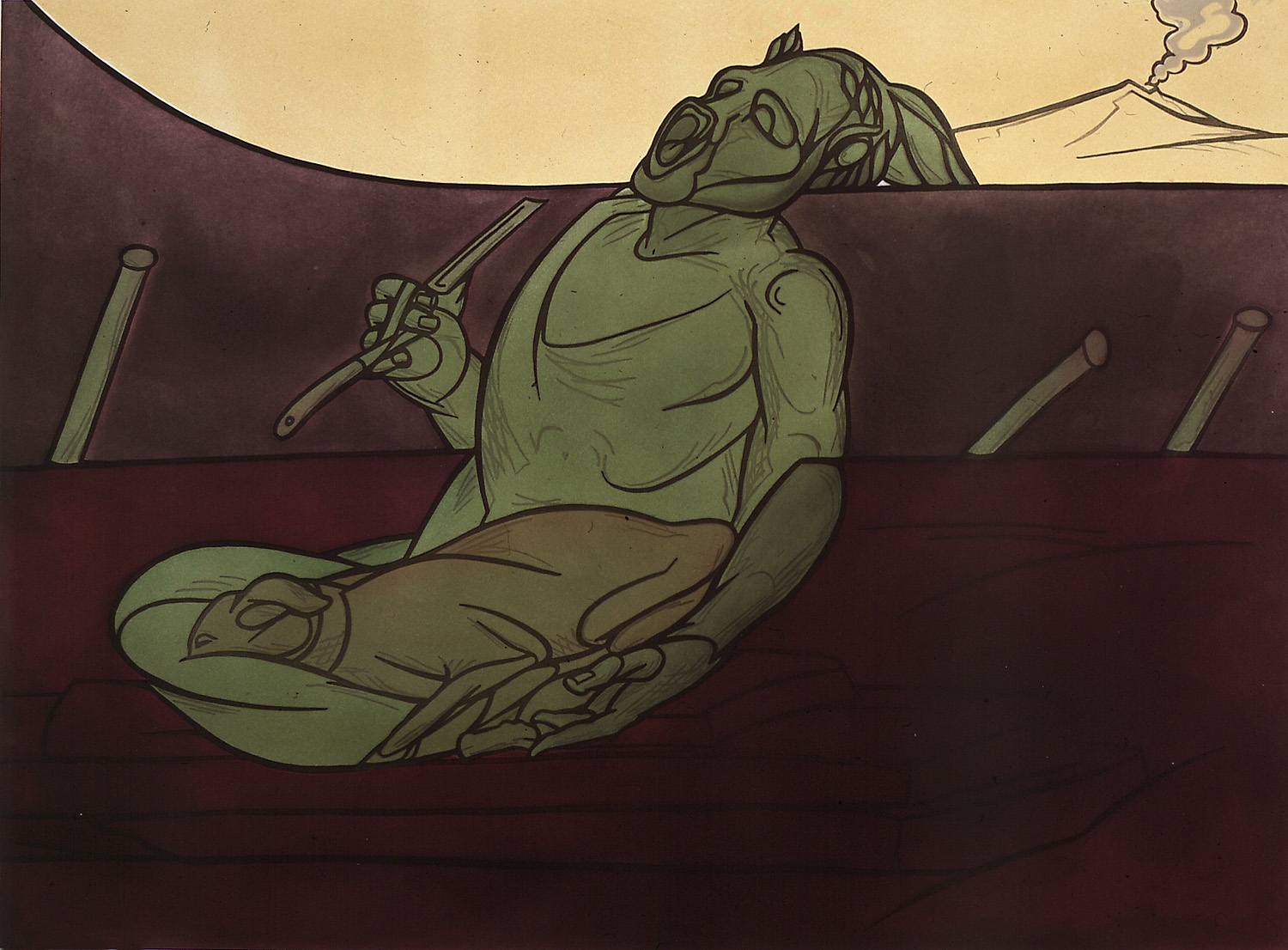 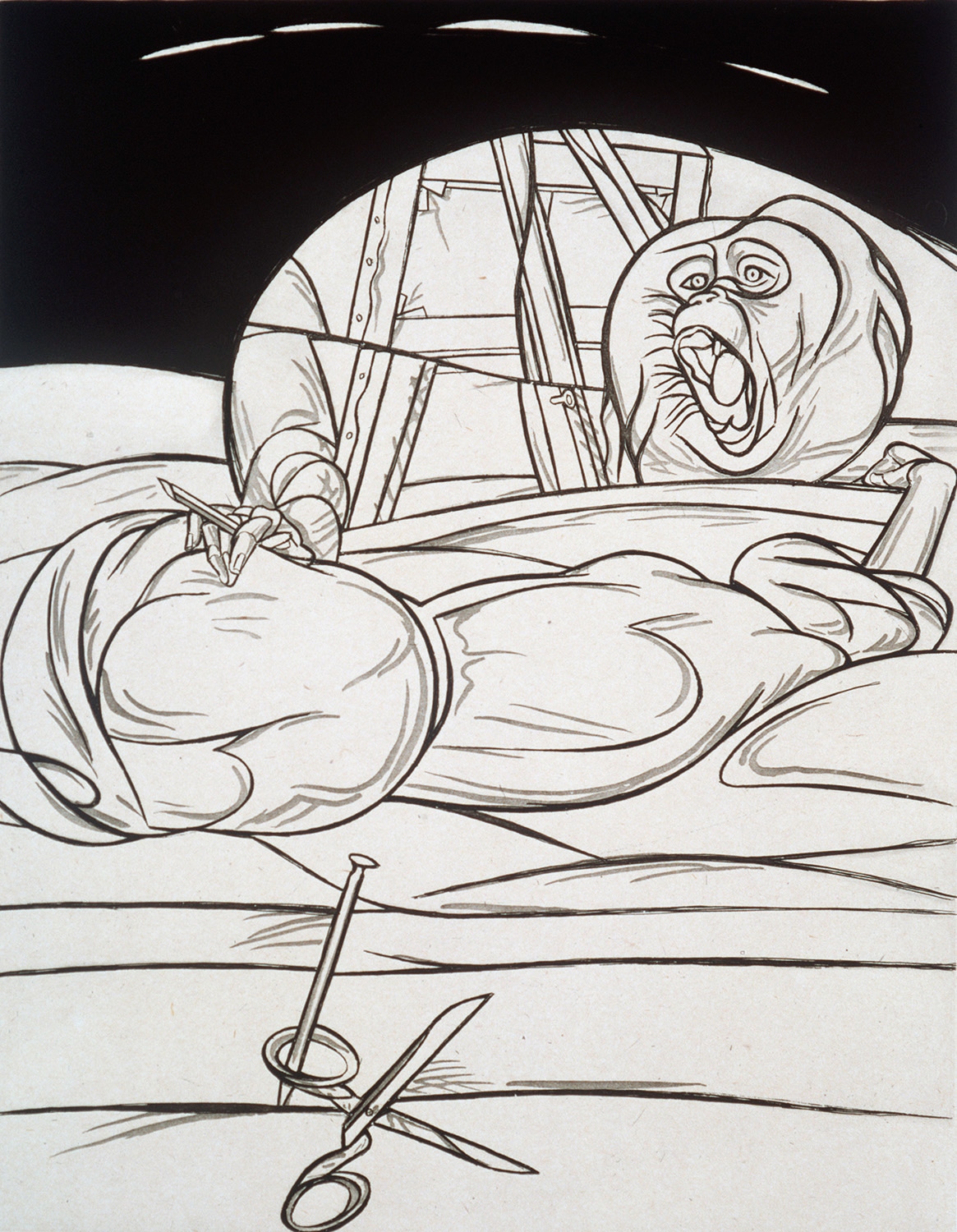 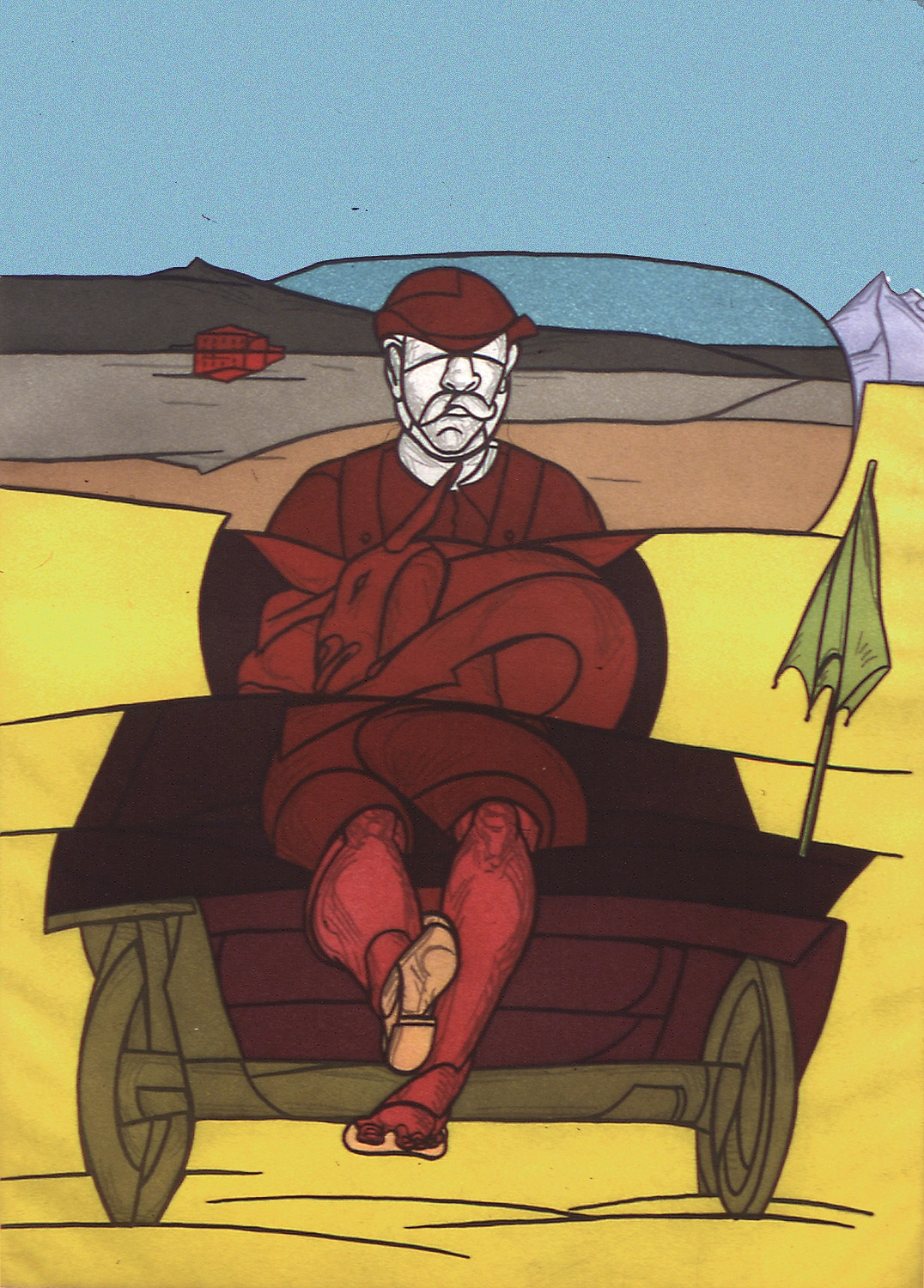 Clet's start with the colors. One believes that the image, pervaded by extended and homogeneous backgrounds, is composed of just three colors and, instead, one discovers that it took seven to create it. It is a property of works of art to fully surprise the viewer when he thinks he has them in his hand. So it is with simplicity, always apparent, never obvious. And then, simplicity is a goal and to understand it, the user must complete at least half of the tortuous turns in which the artist is involved before identifying it and governing it.

To a summary judgment, the images conceived by Valerio Adami reveal some kinship with those of the comics. The line drawing, compendiary and showy like a groove, the extensive backgrounds, the flat colors, devoid of great modulations. Everything would lead us to believe that it is a clever, personal variant of an expressive technique that has existed and has been in vogue for centuries, returned to the attention of museums and collectors by the spread of pop taste and Lichtenstein's work in particular.

But yes, let's face it: the comic has a courtly origin: it dates back to the figures of the saints lined up on the walls of medieval churches, with their dangling feet and the inseparable phylactery to decline name and virtue. Since the people and, if for this reason, the educated and the inclined, in principle, have never risen from that level of devoted illiteracy, here is the need to continue the art of comics over time, only by securing it a little. ”Indians and gangsters in place of the saints, passions forbidden in place of the visions of Saint Bridget.

Comics have a need for dry and precise information clarity. It can abound in detail and in scattering of objects, but everything must be perspicuous and legible. Form and information must go together, almost as if they were road signs. No ambiguity is admitted, under penalty of being condemned to incommunicability. The comic strip, the strip, can be the first step towards art and is aimed at an audience with very limited hermeneutic skills. Let's move on to the drafting given by Lichtenstein. In him there is a blow-up summary of any popular comic box; he adds a patiently worked lattice, imitating an enlarged photograph. So there is an image taken from a context such as a ready made by Duchamp and a pictorial intervention that simulates a mechanical procedure. The impact on the viewer is the result of a calculated cloning: the technique of photomechanical reproduction procedures is simulated using the craftsmanship of the painter.

Valerlo Adami follows a completely different path. As its colors seem two or three and are five or seven, so the story that is depicted seems clear and instead it is indecipherable. In Adami the image comes before the appointed procedure to achieve it. Moreover, its historical credentials, its ancestors, are to be found elsewhere.

It makes me think of the spaces of the cathedral of Siena, of those drawings engraved on marble with an essential line that cannot linger and chiaroscuro as if it were paper and greasy pencil. To scratch the marble you need a firm hand like that of Fontana when he made the cuts on the canvas. Neroccio, Pinturicchio, Beccafumi, and others less known had it; it remains a nice idea to make a three-dimensional drawing on the marble. The same goes for Adami's aquatints and etchings, where the same boldness is exercised on copper plates.

The drawing is a summary, a distracted glance perceives a reassuring picture and instead you can smell the sulfur and the devil who has sneaked into the sacristy. Is the dramatic poet, lying in the bathtub, a re-enactment of Jean Paul Marat or an update of a Savinio's fantasy? What allegory hides that mountaineer ascending to a mountain peak, with the temple stamped on the rescue donuts and the rake on the ground? Medieval allegory told a complete story to allude to another more difficult one. In Adami the allegory reflects itself; the story is ambiguous and, if it alludes, refers to another ambiguity.

Consider the sheet titled Early Morning: Where Are We? At a Club Méditerranée campsite? Where will that razor work? On the face of the undecidable character (male, female, animal?) Or on the animal in her lap?

In the Devil's Trill I find the devil more reassuring. At least you know who he is. The violinist is only a mask crowned with laurel; something that compares it to the deception of the shameless Venus kissing Love in Bronzino's painting. Moreover, the Woman with the Rifle in a post-Chirico landscape makes me think of those characters from the films of Feiffer, Bogdanovich, Altman who, at a certain point, after having committed a lot of indecency tolerated and forgiven in the consumer society with fatuity , they come to their senses in a gasp of resipiscence and then they kill all those who come around them with scientific scruple.

My predilection goes to Medea where all the waste of the Biedermeier is put to the sedan in a twilight light that is incorporated into the figures. The pianist - Clara Schumann? Marta Argerich? - on her knees, her feet bare, a large breast is looking for no one knows what, while a teratomorph suitor writhes, perhaps at the fading sound of the last notes. In all this, the tonal passages allowed by the aquatint, the insistent lines that reinforce the structure of the bodies or landscapes, intensify the strength of a drawing which, as it is deciphered as an image and not as a meaning, turns out to be somewhat more complex and less obvious than we were deluding ourselves.

Yes, Adami is not just a perverse designer at the right point. He also knows the nuances of his craft, he knows what are the right means to mislead the viewer and yet keep him glued to his tracks. Even the colors: red, yellow, green, brown, are the ones that recur most often in our optical habit and end up arriving at the unusual, the surprise.

Adami is an alien who has quietly infiltrated our daily life!